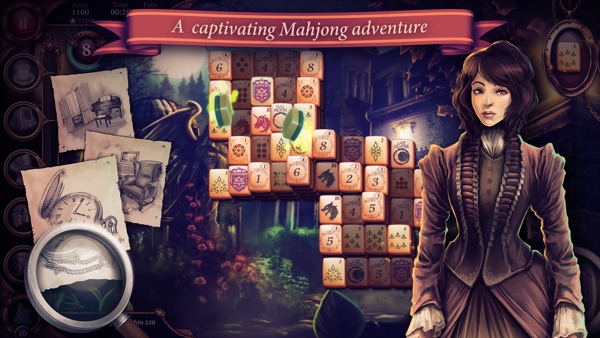 This app has been updated by Apple to display the AppleWatch app icon. Fixed save on certain devices; apologies to all users affected.

FEATURES:
– A deeply compelling narrative full of twists and turns will keep players hooked
– 60+ classical Mahjong levels to master with over 200 additional Mahjong stacks in bonus mode
– Innovative Mahjong mechanics and power-ups interweave seamlessly into the adventure via a mystical medallion
– Major boss encounters are marked by match-3 challenges delivering a refreshing switch in thinking
– Six locations to explore as the intriguing plot unfold!

For more great games, please visit our room on the App Store!

It would have received a 5 if the option to remove timed Conditions existed.

Fun and very challenging. The power ups and pendant add a dimension to the game I haven’t seen before. There is even match 3 thrown in. The best part is you only have to pay once! I play multiple times each day. In addition to the story, there are also 232 extra challenges which you can play as often as you like.

Good ,addicting and interestin* to find the conclusion.now you went and ruined it. I will not pay to play any game. Either giv3 som3 games for credit towards purchase or I need to delete your game.

I play a lot of mahjong and it's relaxin at times and can get boring. This game adds a whole new twist on mahjong and let's you get involved in the story. It's fun and challenging and addicting. Great game!

I love the graphics, the music, the storyline so much but the difficulty level makes it unplayable! It becomes tedious to play around the mushroom forest. Games shouldn’t make you want to throw your device out a window. Gameplay should be smoother, the tiles are too small but the zoom feature wobbles, after playing the same higher level over and over and over and over and OVER again I deleted it with great disappointment.

I go through a lot of puzzle and HO games. This game is interesting and a nice change of pace. The game is easy to learn and yet deeply challenging. I like that if I am unhappy about the number of stars I have earned on one board I can endlessly replay it without consequences. I have finished chapter one and can’t wait to see where the story that holds the game together goes. My only complaint is that the story happens in London. I think I would have preferred a Chinese storyline to go with a quintessentially Chinese tile game.

I’m very picky about games and end up deleting 95% of them. That being said, I really like this game and it’s a keeper. It has a nice storyline with a Clue-like style that has you trying to find the missing character after every puzzle you pass. The game has nice graphics and plenty of power ups that let you pass each puzzle. Be prepared to pay the 3.99 for the full game. That’s not much money for a good game but if your cheap and don’t want to pay, there’s plenty of free crappy mahjong games out there for your choosing.

If you like story driven Mahjong this one is decent. The story line is obvious but at least isn’t too boring. Worth the purchase? Eh depends on your own view of the story and game play. If you read a lot, not worth it. If you don’t read a lot, worth the gander.

This is a fun mahjong but on level ten some of the tiles are hidden by the pendant and I tried shuffling the tiles but the last tile cannot be played.

The synopsis of the game doesn’t tell you that you have to pay to unlock the rest of the game after chapter one, sorely disappointed and unhappy. TELL PEOPLE THEY HAVE TO BUY IT AFTER CHAPTER ONE DEVS

Wonderful rendition of a solid game

I’ve beaten all levels in chapter 1 and collected all stars, there is NO option to move past it. I stupidly purchased the upgrade thinking this would do it, but nope it only gives you the silly challenges. Hey dev - you say if you have the challenges then there should be other chapter tabs on the left but there aren’t any. What’s wrong with your game? Clearly I’m not the only one facing this issue

So the game is a little slow/confusing to follow (lots of clicking through awkward story text) and you play maybe 6-8 levels of mahjong, and then they ask you to pay $4.99 to progress. Not worth it to me.

I’m giving it two stars because after you play the first two levels you have to purchase the full game . I purchase the game but there are no more chapters to play . Only thing I’m able to play is just the mystery challenges.