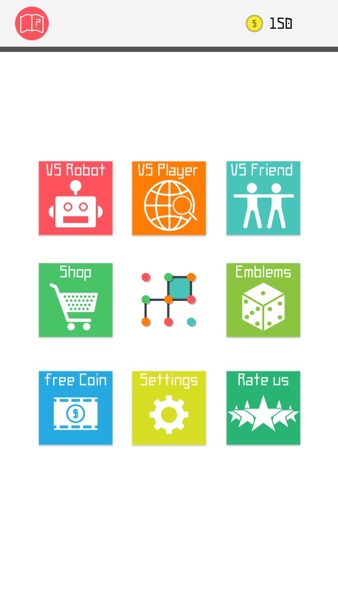 This app has been updated by Apple to display the AppleWatch app icon. + Now we support Apple Watch! + You can give suggestions through the Settings. Let me know you idea and improvement for this game.

Close more squares than your opponent by simply connecting the dots. 4our Dots – Dots and Boxes is based on the classic, time-tested game Paddocks, one of the best games to boost your strategic and tactical abilities!

4our Dots is based on a simple concept: You should connect the dots displayed on the screen to make squares. The player who makes the higher number of squares wins the game.

4our Dots can look simple, but it will test your tactical wits to the core! To make this classic game even more interesting, we have introduced some fun factors.

+ Whenever you beat another user, you get coins or game money
+ With coins, you can get emblems to represent you
+ Choose from more than 30 emblems of different kinds
+ Use coins to get a hint or increase your turn time
+ You can play with robot or friends or players from around the world (bear in mind, robot doesn’t give coins!)

*** Some of the other awesome features of 4our Dots include: ***

4our Dots is game which everyone can enjoy. Gift Dots and Boxes to yourself, your kids or friends and get smarter even while having a ball!

You need coins to do anything but play with robot. So stupid.

THEY SAY YOUR ON EASY MODE BUT THEY PLAY YOU HARD MY DAUGHTER KEPT LOOSING AND SHE GOT UPSET AND BROKE MY PHONE DO YOU THINK THATS GOOD? HUH

Not only does it get boring after a while playing a robot, this game doesn’t give me the free coins “daily” like it’s supposed to, and i’m not buying any. So here I am stuck playing a robot. Really gonna go ahead and uninstall.

I’ve only been playing for 4 minutes and i am not pleased what so ever. I have had to play with this so called “robot” because this stupid game says I don’t have enough coins. And there is a button that says “free coins” but it literally doesn’t work which is seriously beyond annoying. It’s a great concept and I downloaded because I like playing on game pigeon on iMessage but my friends are sometimes busy. THE WHOLE STINKIN’ REASON WHY I GOT THIS IS SO THAT I COULD PLAY WITH OTHER PEOPLE AND I CANT EVEN DO THAT BECAUSE I HAVE 0 COINS.

To be honest I forgot I even dowloaded this for the longest time. The game was fun at first; however, I wish the difficulty was higher. Even when set to “crazy” this game is extremely easy. I always win 21 to 4. There is simply no challenge. Needless to say, I got bored very fast.

So im over the robot its boring but yet i click on the play with player and it says i don't have enough coins, tbh i don't see why they needed this and i think they should really fix it.

It’s a great game but the free coin is not working for me so I have no option but to buy coin.

This game could be a lot better

I wanted to play this game with my kids and it won't let me without earning coins every day. Dumb. Deleted.

There are better apps. This one makes you have a time limit and if you don't move before the time is over, the robot wins. It can have a setting where you can turn on or off the time limit, but it doesn't have that setting. The robot can wait. It's not going to kill the robot if it has to wait. Please fix this.

In the children's game of connect the dots, a player cannot be skipped and there is no time limit. Therefor, in this case it skips a player after 8 seconds and gives the other 2 turns which is totally messed up. Learn the rules then code a game.

It wouldnt connect with any online players. And half of the draw to this is the coins you get from playing online (at least to me) so i dont recommend it. Its probably just not popular enough yet

It's similar to tic tac toe only much harder and you have to think much farther ahead.

I always associated this game with restaurant menus. My daughter an I would always play and she would always "win". This is the first time seeing in a app and I'm kind of surprised. This is s very good adaption though the computer is not a good opponent. Way to easy. The menu is a little amateurish but the game plays very well and true.

I liked it until the point where I found the algorithmic flaws. Beat it 32-4 in hard level. I'm looking to challenge my brain further. That said .. This is the best Dots and Boxes game out there. Nice work!

I like this app because it is addicting, but it is very hard to stay interested in this game for a long time. Good time killer.

There's seems to be only one size grid for the game. Player always goes first and ai always wins.