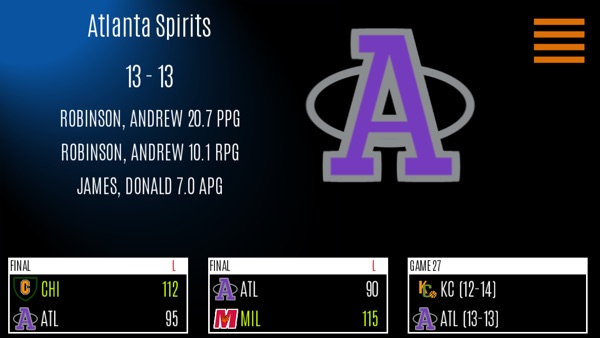 Fixed an error where adding an apostrophe/single quote character to a team or player name causes the inability to save.

Manage your team to a Championship!

Build through the draft, or through free agent signings and trades as your team competes in a 30-team league. Set your rotation as you take control of coaching duties in addition to managerial duties.

The goal of this game was to create a basketball management simulator for mobile devices that is fun to play, yet can be enjoyed for minutes at a time, or hours. The settings are simple enough so you can get started in seconds, simulate an entire season including off-season tasks in less than a minute, or take longer as you carefully manage your team’s progress.

One in-app purchase activates all features and removes ads.

– Pick from one of 30 random teams.
– Use the randomized team rosters, or start with a league-wide draft.
– Set your rotation, add/drop players, trade players, and draft rookies.
– Get achievements for successful seasons, award wins, finals appearances, and championships.
– Edit team and player names.
– And more!

How can you have the option to draft but not the option to scout. It should at least have the players overalls already showing up instead of letter grades since we can’t scout.

Nothing else to say

You guys have messed up the entire game by simply adding these little coins to the game. It was very fun when we was able to keep playing as long as we want.

It’s a good game but the fact that you have to pay 10 bucks to play with any team after a few seasons.

Game was ruined by micro transactions

This is stupid I can’t play after one season! Fix it!

Before the in app purchase, this was the ideal gm game. Choose your team and work with them from the highs and lows of each season. It was almost a basketball rpg! Start with a low rated team and build them into a young and upcoming super team. Or start off with a dominant dynasty, win a championship and show the league who's top dog for the tim being. The system you guys had created was perfect! I found a 66 overall 22 year old kid who ended up being my league mvp from free agency. I had my best player end up becoming a veteran back who faded out of the league. My team won it all with our highest guy being 79 overall. Possibilties were endless! Until this last update, in app purchases restricts you from you favorite city and restricts you to atlanta, unless your willing to pay money to choose others. I understand the devs have to do this, but at least do it to where you cant restart leagues with out paying or maybe a multiplayer mode where you and 6 other people take over a team and try to win it all over the course of the week. But dont take things you have already given us! Thats just unfair devs. I understand you have to make your money, but just hear your real fans.

Then they forced you to buy stuff. Was better in old update.

This game is pretty user friendly and looks to head in a decent direction. However, it lacks a lot of detail and options: - you can't sign a head coach or other administrators - you can't scout upcoming rookies so drafting becomes very confusing. - you can't put players through practice or on a trading block. - random things such as player emergencies or injuries don't happen. - there's no window where you can view a player's stats from previous years. -there's no window to view your team stats and compare them with other teams.. The point of this game is to manage with skill and customize teams and players.... This game allows for none of that.... I can't even create my own player from scratch... The foundation is there, it just needs to expand.

Still questioning why anyone wasted there time on making a gm game with no correlation to real life players, not even lejon James, or code Bryant

I was dumb enough to pay the money to just try it . Curiocity killed the cat . Worst management game ever . DONT buy it

ALWAYS crashing and wants you to pay wayyy too much once you've downloaded the "free" app. Literally any other GM game in the App Store is better.