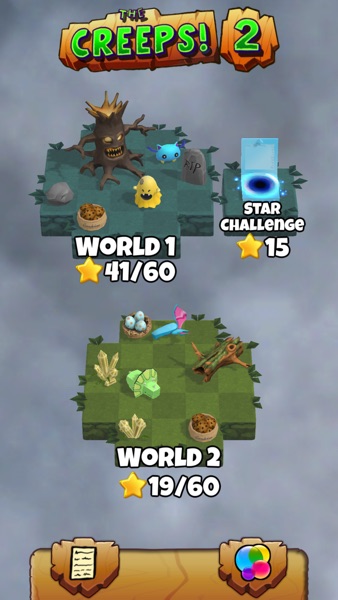 Get ready to strategize and protect your precious cookies from all the crazy Creeps! Almost 9.5 years after the launch of the original game, The Creeps! 2 is finally here! Crush the Creeps with all kinds of toy defenses—water blasters, boomerangs, glue bottles, flashlights and more. Plan and choose the best time and place to build and upgrade. Play like a boss and outsmart the Creeps in 140 fantastic puzzling levels!

V.I.P. Membership
This auto-renewable subscription is available to assist you!
All gems earned in game are doubled, and dropped gems are collected automatically! The value of any purchases in also doubled for V.I.P. members!

• Subscription Duration: 1 Month
• Payment will be charged to iTunes Account at confirmation of purchase
• Subscription automatically renews unless auto-renew is turned off at least 24-hours before the end of the current period
• Account will be charged for renewal within 24-hours prior to the end of the current period, and identify the cost of the renewal
• You can manage subscriptions and turn off auto-renewal by going to your Account Settings after purchase

Loved original creeps and bought all packs. I won’t give them a dime for Creeps 2. They ruined it..........

I feel trapped in this game, unlike the first one.

I can’t get past the first screen. Tried to Tap, double tap, drag everything on the screen. Nothing happens. How do you play this. Disappointed.

I loved Creeps 1. I bought several of the bonus packs of new content, and play it all the time. Creeps 2 is a huge disappointment- they made it a giant money grab. You can play about the first 6 or 7 levels, which are all pretty generic unfortunately, but then you need to “upgrade” your towers to advance, and guess how you do that! You either grind the boring low levels over and over, or you pay for gems to upgrade your towers. You aren’t paying for new levels, or cool enemies, you’re just paying to play the basic, early levels! It’s a sad joke that the awesome game has been ruined by greed. Very disappointing.

After the last two updates I can’t even get the app to open. I’ve deleted and downloaded twice with no luck. Update: 3/28/19 received a message from the developer that they fixed the problem so I downloaded the game and it works! Plus all my progress is still there, yay! Update: 6/7/19 App won’t open again. Bummed

Updated to the latest version but the app constantly crashes when I try to open it. Fix it!

Yet I will not submit to the pay as you play mentality.

I loved the original and was thrilled to buy this version. Played through levels 1-2 quickly and still loved the game. Did the star challenge over and over again. I was super excited when level 3 came out! Then I hit level 3-9.....I have played it at least 10 times and have not gotten close to winning.... Not. Even. Close. I can only assume this is an attempt to get money for upgrades. I would gladly but more levels like I did with the original, but not if it is so impossibly difficult to progress without spending money. Very disappointed that I won’t be able to move beyond 3-9. :( Added 5-27-19: Used the YouTube video to beat 3-9 after a few attempts, since if it is not done exactly the way the video shows then you lose...what a joy to have to rewatch a 10 minute video after a mistake is made. Even the developer did not get a perfect score. The levels after 3-9 are also very difficult and have made level 3 not worth playing. TLDR: Levels 1 and 2 are awesome. Level 3 is not fun at all. Way to ruin a game I loved!!!

The game itself is ok, but there are some serious issues. I paid around $10-$15 early on to advance a little quicker. I beat all 3 worlds with all my weapons upgraded to 20 or higher. Well, I needed to delete the game for storage issues during an update, and when I re-downloaded the it, most of my weapons were back to level 1! I emailed the developer, and after a week, they corrected my weapons in world 1. I emailed them two more times over the last two months, and I have heard nothing. Come on! I know it wasn’t much, but I did spend money on this game! I would at least like to get my money’s worth!

I was waiting for this for years, and is so NOT what I expected. Same game in a bad 3D image. Do t like it at all. Will delete it for sure! Not recommended.

So I paid to get gems so I could upgrade and now my upgrades are gone and it won’t let me purchase more! It says purchasing is disabled during beta testing???

I’ve been loving this game, especially this week’s update. However, today the game won’t load at all. Every time I press the app button to launch, it simply crashes and won’t load. Please please please fix this. I’m playing on an ipad.

I really liked the first game. And I enjoy this one, however, can we get more levels? Just 2 worlds don’t seem enough. On the first game there were releases at least every holiday. And now the app crashes and won’t open. Changed down to 1 Star

The game immediately crashes when I attempt to start it. Rebooted phone to no avail. I’m on an iPhone XS with the latest iOS. And the support link goes to a 404 page not found.

New update causes CONSTANT CRASHING! Can’t even open the app AT ALL. Tap on it to open, CRASH. Tap it, CRASH. Usually a decent game (although some levels are IMPOSSIBLE if you don’t update your weapons, so I can’t play until it gives me enough “jewels” or whatever, which means I can’t play for several days until it does), but now I can’t even open the game at all. Please fix the crashing issue and send me more “jewels” so I can play please! Thanks

This game crashes constantly after playing for a few hours and after redownloading it saves your progress but resets all tower levels to level 1. Which is basically the same thing as resetting the entire game since a level 1 tower is now good at stage 18.

I start to play, but in the middle of the level it just freezes

The developers broke the targeting system, which allowed you to target certain creeps. Unfortunately, the AI is too dumb to pick the correct one to shoot at, so fast ones get through and there’s nothing you can do about it. This makes the game a whole lot less fun, and unnecessarily frustrating. And on top of that, it crashes half the time it starts up. And you can no longer control the UFO..... what the.....?