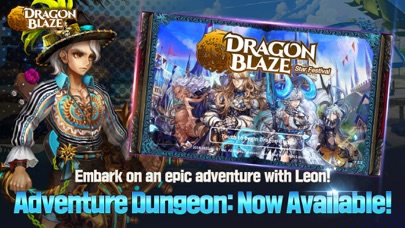 You’re the only one who can solve the mystery about this never ending war!
Get ready to go on an adventure in Dragon Blaze.

* High quality RPG with an intriguing storyline!
– The way to solving the mystery of the never ending war is full of danger.
– Boden’s descendant, you are the only one who can save this world.

* Enjoy the fun of collecting hundreds of allies.
– Make the characters from the stories into your own allies.
– Travel with powerful allies.

* Leveling up your party is easy!
– Challenge combined dungeons to level up quicker!
– Try different formations and party effects.

* An easy-to-enjoy auto battle system!
– Be victorious by using auto battles and AUTO HELP to summon helpers.
– Use the auto retry system to enjoy a more comfortable gameplay.

** This game is available in 한국어, English, 日本語, 中文简体, 中文繁體, Deutsch, Français, Русский, ไทย
** There may be additional costs when trying to obtain certain items.

Title says it all, they keep making the game worse and worse, been playing since it’s release and now it’s just stupid .2 versions every year with terrible changes. Stay away from this hot pile of manure, it was good, now it’s terrible

I have been playing this game since it came out, how many times are you gonna make me redo the entire story line??? I’ve already restarted it at least 3 or 4 times and it already takes hours to get through because it’s SO SLOW.

Loved the game, took a bit of a break and have been trying to logon for almost a year now. The game simply won't launch even though it says it's still an updated game. Really unfortunate since this is one of the few games I constantly go back to.

Not a bad game at all, the reason I am holding a star from the game though is because of how confusing the loot,hero, and basically the entire game is. Love it to death but vvvv unorganized

My gosh, when I entered the game, I was blasted with awards and characters, things are popping up that the game doesn’t explain, I’m getting rewards and I don’t even what it’s for. There’s just so much, TOO MUCH going on that it’s sort of unplayable, but I don’t know, maybe it’s just me.

Still can’t figure out how to beat someone else at PVP, but I kind of love this game. Yeah, I wish there was a more interesting combat system that I could understand (man, that power creep) or anything I could understand, but the art is TOO PRETTY! Just download the game to look at it. They give you like millions of resources and 100+ free characters. It’s awesome.

I’ve been playing this since 2015. Ifk why I got addicted but I’ve seen so many changes in the game. Literally everything. Pretty sure I’ve played since it’s life began and I’ll keep going. Lie to get rewarded for being a long fan of the game but me playing should be enough.

I’ve been with Dragon Blaze for a while(even got the stickers), and I’ve always loved it for the art, battle systems, and how the devs are very generous and allow for several ways to get higher characters. I wanted to leave a review for something that has given me so much entertainment over the years. Thank you.

I’ve been playing this game for years which is why I hate to give it 2 stars. It was the one game that you could do half decent in without putting a $1 in it. They are more then gracious with the free items they give out. But that all changed with a last few updates that “revamped” the game. The game and the characters look great and it has a very long story but I didn’t really pay attention to it so don’t know if it’s good or not. The game play. If you can call it gameplay. You choose a group of characters. Hit play and watch. You can’t interact with any of your characters at all in ANY mode. You sit and watch. Some missions go on for 5+ minutes. The people on the leaderboards either put some serous money into the game or hacked it. There used to be some kind of interaction way back when before they revamped it. I really don’t know y they removed it. There’s a lot of game modes but it’s all the same. You sit and watch….. I hope com2us can make it a awesome game again but we’ll have to wait and see.

Listen I love this game, but it just started me back at the beginning after all my progress, yes it saves my progress with heroes, but also the story doesn’t have its Cutscenes.

I’ve been playing this game from the release and it held a special place in my heart for games, however I prefer the older version of the game. I just wish the new aspects came in without drastically changing the game.

spent money on this game to be logged out all my progress wiped and it won’t even let me load up the game anymore. 10/10