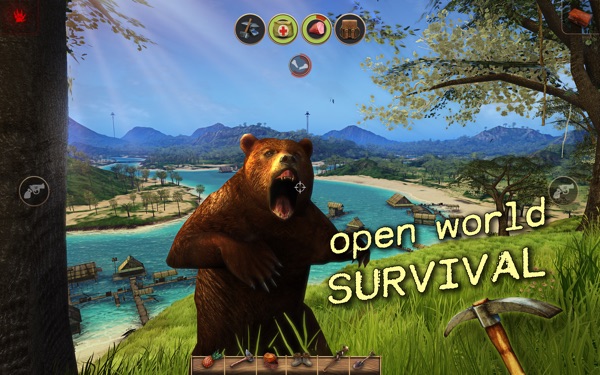 Radiation Island is a survival adventure game where you craft your own destiny in a huge open world environment. As part of the Philadelphia Experiment you have become stranded in a parallel, alternate reality. Discover this new and mysterious world, with all its surprises. Use everything you find to survive it and solve its puzzle to get back to the real world.

Follow your own path in an environment of breathtaking beauty and gigantic scope. Explore huge forests inhabited by dangerous wolves, bears and mountain lions. Investigate abandoned villages and old military compounds where zombies guard vital tools, weapons and clues to the secrets of this world. You can even swim and dive, if you can avoid the hungry crocodiles.

Experience the full day-night cycle and face the dangers of darkness and cold.

Survive and beat the game to unlock multiplayer mode: fight other real players online in a closed arena for valuable resources.

iCloud support is integrated so players can save and share progress across devices. AirPlay lets you play the game on larger displays via Apple TV. Climb the Game Center leaderboards, challenge friends and unlock dozens of achievements.

Any game that starts with a forced long tutorial with no option to quit deserves 1 star. No decent developer would do that.

On a MacBook Pro Sierra 10.12.6: Pulling the trigger puts the weapon away - what a funny joke at the players expense! Requires frequent restarts. Gliders and canoes don’t work - they get stuck in a plane below the landscape. More reastarts. Adjusting settings traps the user in an inescapable screen. You guessed it - more restarts. Note the increasing one-star reviews. This could be a decent game if it played. No response from customer support, either. The codes for the various islands’ towers are for a different island, so count on going to a cheat page early, though you’ll likely not get a chance to use the codes when you get them. Not a very fancy game, just sloppy development.

Had this game on my ipad but wanted to do it again on my mac book. When I downloaded it on my 2019 mac book pro my mac just wigged out. Wouldn't recommend for newer macs.

Game is unplayable due to the start up message…When the message pops up, it’s stuck there and the top. Even when I open the game menu to try to gain access to the mouse pointer, it is no where to be found, thus making it impossible to click the “accept” on the screen message.

the game is crashing from start, hope you fix this one soon.

Continues to crash whenever the game center updates show. 2.99 down the drain

Great game at first. Had almost all of the important items needed to drop the towers and such, including the pistol, machine gun, torches, melee weapons, etc. When I was entering a code for the last tower on the island THE GAME CRASHED. When I reopened the game I LOST EVERYTHING….every single item i picked up and/or crafted including all 5 rows of items in my backpack were GONE. 26 hours worth of progress gone because of some glitch. I am pretty frustrated since I played about 4 hours today at least. Fun game but make sure you save your game, OH WAIT YOU CAN’T DO THAT BECAUSE IT WONT LET YOU. Be careful.

This games does not work on El Capitan but it worked perfectly on Yosemite. So sad that I cant conitnue to play the only game I paid for in the App Store :(

This game is excellent. Great open world, crafting, expoloration, survival. Only issue is that if it crashes all of your items and all of your progress gets erased. After 10 hours of gameplay all of my progress is gone. Worth starting over? Sure. But, I’m concerned it will happen again. Would love to hear from the developers about this because it’s happened to several people on the web. Will definitely upgrade to 5 stars when the problem is resolved.

OS X Yosemite, Late 2011 13” MBP - all it does crash, run corrupted graphics, never gets past the intro and to the gameplay. Also discovered that when it comes to the Mac App Store "All sales and rentals of products are final.”, so I’m done with the Mac App Store and given the way Apple has been managing its business and product lines recently, I’m getting close to being done with Apple.

before purchasing this game, I wanted to know if it support PS3 gamepad on mac I was happy to receive a confirmation from the game support regards my question this is the email i received: Our games support the PS3 controller. However, you failed to mention the game in question... (the PS3 controller should work on SGSR, Radiation Island, Battle supremacy)   Kind regards, Liviu so I went ahead and bought the cheap game and when i went there, could not find any way to make it work with the ps3 controller emailed them back with no response very disappointed, am not sad on my $3 but just WHY!

Opening the game for the first time, an EXTREMELY LOUD NOISE just played. Is this a glitch or what? If they don’t fix this then I wasted my money for this. ABSOLUTE 1 STAR. You made my heart race so fast so please fix this game so I could freaking play this game and give how many stars it should have.

This game was amazing. I loved it. But then it crashed and force quit on me and I lost everything. I had a ton of slots in my backpack with a full inventory and lots off good items. I had completed many of the dig sites as well. Now I am back to a five-slot backpack and have none of my items at all. I have noticed that other people have this issue as well. IT NEEDS TO BE FIXED. I am also running the newest OS on a 2014 Macbook Pro. This should not happen and I can’t play the game again until I know that I’m not going to lose all my progress. FIX THE ISSUE.

I’ve been playing a couple of days now and visited most of the area and then the game crashed and I lost everything! My backpack was almost maxed upgraded and I had lots of weapons and now everything is gone! Now I have to start again!