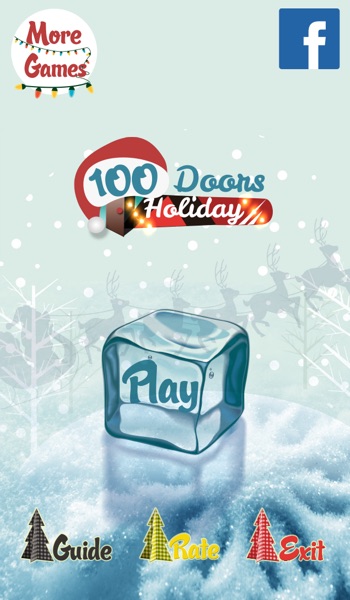 This app has been updated by Apple to display the AppleWatch app icon. 40 brand new levels!

100 Doors Holiday is a puzzle game where you must figure out how to open each door!

Think you can open them all?
-Shake your phone
-Look for hidden objects
-Solve problems
ESCAPE!

We will constantly update the game with more levels!

Won’t let you skip if you want.

I bought 5,000 coins and now the game wo’t load. I get the “loading 0%”. This guy is a fraud and takes money but he doesn’t allow you to play anymore! What a ripoff and Apple should remove this game because they are allowing him to steal money! BEWARE!!!!

I bought coins 1 day ago and it just keeps saying downloading 0% I uninstalled it and reinstalled but keep getting the same thing. It’s a great game makes you think

I made a purchase and now it won’t load. Just says downloading 0%

Stuck On level 61 it won’t load at all

Level 3 is glitching, won’t do anything. Barely got started. Terrible

Just downloaded this game and it won’t load. 😕

While I enjoyed playing this game, I am now quite frustrated. I reached level 46 and all of a sudden, it said downloading 0%. Has been that way with the circle spinning for two days. Finally I had to delete it. If I reinstall it I will have to start over. Also since I do play on multiple platforms, android phone and iPad, it would be helpful to tie it to Facebook so my progress would be saved.dissapointed

I paid for coins and the game refuses to load ever since.

I have really been enjoying the game until it froze up on level 61. I see I am not the only one so how about a fix!

It funny game except it won't go past level 61😕

I updated this game yesterday for the new 40 levels. The new levels will not load.

I enjoyed this. Nice graphics and a variety of puzzles. Some didn't function as intended, and some were obscure.

I found that I couldn't do 3 of the levels because it would not respond to my touch. Otherwise it's an enjoyable game.