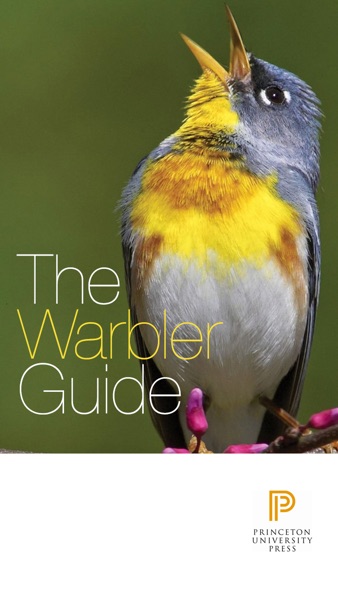 This app has been updated by Apple to display the AppleWatch app icon. * High-resolution, zoomable, and rotatable 3D models of birds in all plumages, to match field experience of a bird * Detailed "how to use" tutorial screens

Winner of the 2016 PROSE Award for Best App/eProduct

The Warbler Guide App is the perfect companion to Princeton’s revolutionary and widely acclaimed book The Warbler Guide, by Tom Stephenson and Scott Whittle. Whether for study or field use, this innovative app delivers the full power of The Warbler Guide in your pocket—plus unique new app-only features.
The app allows you to identify birds by view or song, quickly and intuitively. Exciting new 3D graphics enable you to view a bird from the exact angle you see it in the field. And the whole range of warbler songs is easily played, compared, and filtered.

Tom Stephenson’s articles and photos have appeared in Birding and Bird Watcher’s Digest, at Surf-birds.com, and in the Handbook of the Birds of the World. He has guided groups across the United States and Asia. A musician, he has had several Grammy and Academy Award winners as clients, and was director of technology at Roland Corporation. Scott Whittle lives in Cape May, New Jersey, and has twenty years of experience as a professional photographer and educator. He holds an MFA in photography from the School of Visual Arts in New York, is a fellow of the MacDowell Colony, and is a onetime New York State Big Year record holder.

A great aid in discerning what warbler you were looking at in the field. The comparative chart with other species is valuable. The rotatable 3-D illustration of each warbler is fantastic.

I was excited to discover this app. Instead, I have been disappointed by the poor design of the app and the lack of a search feature. I wanted to look up a warbler that the app considers outside my region. The only way to do this was to change the region so the bird would show up. For the high price of the app, I expect better.

But giving a 2 rating because I hate the location feature. Why not allow a user to scroll through all the species? Inconvenient.

I’ve been using this app for several years. It’s a handy reference to carry on your phone when out in the field. I love the ability to change views of all the birds to compare with the view you saw. Living in central TX, I’ve wondered why they don’t list the Golden Cheeked Warbler at all. I figured it was so regionally limited to the TX Hill Country that they chose to omit it. Just today, I switched my map from the Southeast Version to the Southwest Map which covers from New Mexico to the pacific. Guess who I found! Golden Cheeked Warblers are only listed in the SW map (which does not include TX for this app). Please, consider moving our favorite warbler to its rightful territory! The app would be much improved by making it easier to show “overlap” birds for those of us who are close to two map edges.

This app is nice but a little frustrating. I find it easy to use for identifying the male species of warblers, but not much else. I really wish you were able to click on the type of warbler and see all plumages of male/female/1st year with underside tail plates of each too—Spring and Fall should all be grouped under same bird. The pics are a bit fuzzy and disorganized in my opinion. I really like the 3-D views, similar species listings, and “drab” references; however, really wish that everything was organized together for you for quicker referencing. Should have the underside tail plates in a quick-reference area too.

This app is annoying and basic. I can’t believe they are charging $14.14 for this garbage app! There is nothing in here that isn’t shown in other free apps. There are not enough photos showing plumage distinctions in different seasons. And not enough verbiage to describe the specifics needed for a positive id. I really hate this app so much! Don’t waste your money!

Great content. Really helpful for improving ID. Could benefit from a search option to locate whatever bird you want to see. It’s hard to use in the field when you run into a bird and quickly want to navigate to its info pages.

Can’t say enough about the 3D views and all the pictures of different angles in different plumages. Haven’t even mentioned the songs/calls yet.

This app is full of great tools for identification. Includes useful views from many angles (underside view is very helpful for staring into the canopy) and full 360° models for every vantage point. It has tools to guide you through identification like sorting by song type and painting in a warbler silhouette to search possible species. Species can be sorted in traditional name/taxonomy style OR by similarity in coloration - great for when you aren’t quite sure what you’ve seen yet but know what it looks like, rather than hunting through pages and pages of drawings. Interface is very smooth and quick to load as well. The only downside is the comparison section doesn’t tell you who would win in a fight.

An absolutely terrific app. It's incredibly complete for identifying warblers in all seasons, with many superb photos of each bird from realistic and very helpful angles - including an amazing rotatable 360° view - and a wide selection of different versions of each bird's songs and calls. You can filter for geographical area and time of year, which is tremendously helpful for narrowing the field of candidates right out of the gate, then optionally also filter for a variety of specific characteristics if you want to narrow the possibilities even further. An incredibly valuable resource. I just wish other field guides had some of the same great features. (And no, I don't know the makers of this app personally!)

The seasonal migrations of warblers are exciting, intense, confusing, and over in the blink of an eye. The tools you'll need to survive are a strong neck for looking up, powerful optics, polarized sunglasses, and a phone with this app. Every birder is familiar with Princeton's printed edition of the Warbler Guide, but few know about their app. Even if you have the book, this app is perfect for quick reference and comparison of the warbler species. You can set up your region and season to simplify the listed birds. The images show every angle of the bird possible, including the underside and tail of the bird. I also love the sound comparison section in the app, in which you can do an advanced vocal search, based on buzzy quality, number of phrases in a song, upward or downward notes, etc. Bird songs can also be compared to others, which is an incredible feature that helped me identify a Cerulean and Orange-crowned. This is totally worth the money. Time to go birding!

Incredibly well thought out application for warblers that makes it easy to study and compare views and songs of warblers. I love the option to view Warblers in a 3D format. Simply brilliant! I also love the ability to compare warblers with similar songs and view their sonograms and descriptions of the songs and what makes them both similar and different. Great filter options to search for a warbler if you only have seen part of the bird. If you have other clues such as the type of song, e.g., buzzy etc, then the filter will group the likely birds. A great tool in the field and also for study at home. I wish that these same features could be incorporated into a Northeastern Bird application for all birds, in addition to warblers. A must buy for bird lovers!

I've used this out in the field a couple of times already and found it helpful. The user interface gets easier the more you play with it. I am having one majorish problem though. When I go into a category like age/sexing, often times the description under each photo is cut off mid-sentence. I've tapped, pinched, and dragged every which way, but I can't seem to find a way to expose the full text. Not something that is going to matter a lot to me in the field, but I would like to be able to see the full text descriptions when I am studying at home.

The concept of the app is great and much of the the execution is well done. However, the Swainson's Thrush really needs an overhaul and there needs to be more focus on diagrams with text regarding distinguishing characteristics between similar warblers.

This app is amazing! Just got the iPhone 6 and the app on it's mind blowing! I have the book, and now the app to go with the book! Holy smokes! The 3D is AMAZING!!! You can spin the bird up down sideways truly ingenious! Birders need to see underneath, the tail, the top of the forehead, their sounds! Just wow! I can't say enough. It would be really nice if you could zoom in on the pictures, but that's what updates are for. Great job!!!! I love to play sound games, and Naturetap is out of the App Store, but this just makes you want to soak in all the information you can get! Now if you could do this with ALL birds, you would easily be the number one birding app.

This app is based on the book of the same name. It's loaded with information about North American warblers. There are also some clever features such as 3D models you can rotate with your finger. That's the good news. The bad news is the UI is baffling to understand. I've spent 30 minutes trying to get a list of warblers in my area and I'm still stuck. The other issue is everything is super tiny so it's hard to enter any details. Like the range map divides the USA into 4 quadrants so the is NW, SW, NE & SE. Pretty crude but I can't tell if my city is in the NW or SW. It's interesting that an app can be overflowing with content and yet still be inaccessible. I wish I'd waited for someone else to buy it because it's pretty useless to me right now. If the developers would allow zooming of the images and put some more details into the maps it would help a whole bunch. Finally the developers need to write a tutorial with examples.

I downloaded a day ago. It is easy to use and I love the 3D view (View options). The interface is much nicer on my iPad but it also works well on the iPhone. I like being able to choose the season and geographical area to show birds expected in your area. My ONLY critical comment would be that the songs be labeled for regional variancies. I have to add one more critical comment. Where is Olive Warbler? It appears they forgot at least one warbler

Intuitive and easy to use interface. The first page is thumbnail pictures of warblers, making it easy to find a bird similar to the sighting and click on it for details. There are multiple pictures of each bird from different angles. Most of the pictures are clear and crisp. Similar species are presented also. I have already used the app to identify one of my mystery bird pictures. This will easily become one of my favorite bird apps.

You have put together a superb app that raises industry standards. A bar that others will have a hard time reaching. I wish you could do the same for gulls, Hawks, sparrows.

The 3-D, comparison view is outstanding, especially for field work.