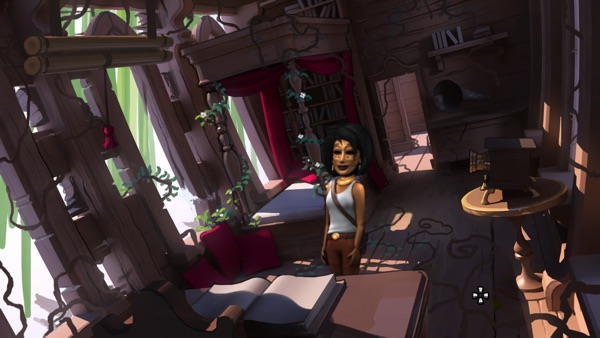 In the jungles of the Underland, scattered remnants of an ancient culture speak of a great evil that dwells in the shadowy depths of the Kwayerumoshi caves. But even the darkest secrets of this lost age are about to be revealed by the brave actions of three unlikely heroes.

In the final chapter of The Journey Down, Bwana, Kito and Lina explore the vast reaches of the Underland and unravel its long-forgotten history. Their adventure comes to a bombastic conclusion when they learn the true nature of the Great Asili tree and the Armando Power Company.

The Journey Down is a classic point-and-click saga with an Afro-Caribbean vibe. Get ready to embark on an epic journey of brain-teasing adventure!

Features:
* A twisting tale of intriguing adventure
* Tons of handpainted environments
* An all original jazzy noir soundtrack
* A fully voiced cast
* HD art and animations
This field is required.

I am thorough impressed at the amount of effort and creativity put into this game. It was on my wishlist for years and I regret not playing it sooner. There needs to be more games like this!!

Incredible game. So fun! So much love went into this… It brought me back to Monkey Island, Day of the Tentacle, any of the Kings Quest Games and Indiana Jones. It belongs among the greats! Also the voices and soundtrack… A+

Hands down, THE best game I have ever played! Incredible on so many levels! The music, art, acting, character development, script… mesmerizing!

The game is literally art. With a sense of humor. Developers, artists, music, actors, just wow. I loved reading behind the scenes. Mad props people!

This is absolutely the best game I’ve ever played on a smart phone. After I played “the never hood” years ago on the computer, I’ve been looking for a game like this until I found journey down.

When I was a child I played every adventure game I could get my hands on as I tried to recapture the magic I felt when I first played Monkey Island. While I’ve enjoyed many, none have lived up to that experience. I started to believe it was just a nostalgic reverence that made the experience more special than it really was. Now, at age 38, just occasionally playing escape the room games on my iPhone, I stumbled on “The Journey Down” and WOW! It has all the magic you could possibly desire in a point-and-click adventure game. And it hurts me, but I’m gonna day it.....I... I.... I think it’s better than Monkey Island!! I’m so depressed that I finished the game now. I’ll probably wait a year and replay it again!

I never write reviews, but I just had to call out Skygoblin for making a fantastic collection of games with The Journey Down. It’s rare to see developers give so much care and attention to a genre like point & click adventures these days. If you liked LucasArts style adventure games like Monkey Island, Full Throttle, and Grim Fandango you’ll love this game. Fantastic story, art, sound, and writing! Just buy it.

I don’t have words to tell the guys that are responsible for this wonderful game how much i enjoyed the result of their efforts. Where to start, the graphics? The music? The whole experience was amazing. Thank you guys for the great game you made. I, and i am sure countless other players are looking forward to more games from the team that made the Journey Down.

I stumbled upon this series from a related search and, after giving Chapter One a shot, I was immediately hooked and bought Chapter Two & Three (I can't imagine how hard it was for the longtime fans who had to endure the wait between each game's release). The graphics, the voice acting and the music are a cut above nearly all other iOS games I've played; the story is imaginative and captivating; and the characters are truly endearing. The third chapter, like the two before it, brims with heart and soul from start to finish, which is undoubtedly a reflection of the brilliant people who made it a reality. Bravo!

I just finished playing the long-awaited chapter 3 of Journey Down. Bravo, bravo, bravo! I know the boys’ adventure has ended, but I’m really hoping for a sequel. Great job, great game, and thank you!

lack of controls, stuck in a loop, got a cactus, but that’s it.

If you’re a fan of classic point and click games like Monkey Island and dig Afro-Caribbean culture you’ll LOVE The Journey Down. The characters are well written, the environments are rich and the original music is incredible. The main character Bwana feels like an endearingly goofy old friend and the storyline kept me engaged the whole time. I didn’t want the game to end! It truly is a one of a kind and you can tell the developers put so much work into it. I hope this game continues to be passed on for years because it’s a real gem.

I love this game, but am navigating by the text only as I can’t get the sound to play. The “settings” field is no help. Any advice on how to get the sound going on my iPad mini? If I had sound I’d rate this 5 of 5.

Fantastic series!! Very much worth playing, it should have been 5 starts, except that it was a very short chapter. I was expecting more scenes and puzzles to solve. Other than that, great work!

Love the series and characters. But this past episode just isn’t as challenging as the first two. Good finale though.

Journey Down is one of the best point and click series ever. Period. However, this last chapter is a little shorter and a little easier than expected. It falls short with respect to the second chapter. Many of the puzzles are obvious, and the time actually played is much shorter than the previous episode. Nevertheless, a pleasant finale to a wonderful series.

The game was alright. The puzzles were easy to solve. The graphics and the atmosphere were really nice. However, the ending was disappointing. It was too abrupt. SPOILER ALERT! After all that trouble to get the horn, and then the hero just snatched the villain, and THE END! Why? The hero was defeated in the past. Shouldn't the protagonists help the hero defeat the villain? Maybe it was time and/or budget, but I feel the game could have been developed more, to make it more complete. The game moved too fast in each location, especially the part where Bwana and Kito escaped from Underland. Also, why did we have to get the license plate?

I found this to be the easiest to complete, and finished in a couple of hours. Not much challenge to the puzzles. Still a well polished game though.

I thought it was a great game, but did not live up to the first two chapters. The puzzles were all pretty linear, and much easier than those in the first two. That being said the game offers a good resolution to the story that was developed in the first two games.