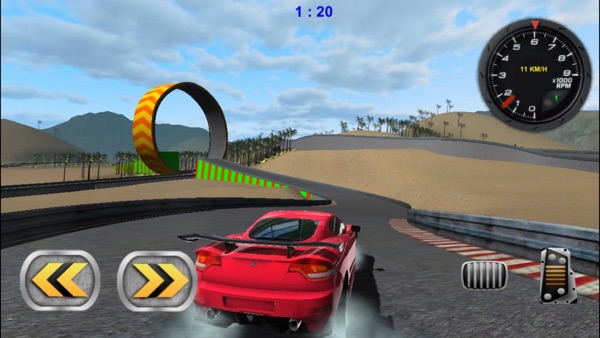 Get ready for the race of your life! In this extreme racing stunts game, you get to drive a car through a variety of wild and crazy stunts such as a giant loop, ramps, and more! Test you driving skills and see if you have what it takes to win the most epic race ever while completing the most insane, extreme stunts. If you have a real need for speed, you will LOVE this game! You’ve never played a racing game until you’ve tried this one! DOWNLOAD NOW and let the race begin!

You get 3 hearts. When you hit the car, you lose a life in which you have to start over followed by an ad. Cool concept, poor delivery.

So when you crash it says game over and then you have a commercial so I hate this game because there’s so many commercials!!!😡😡

Horrible... enough said. Avoid this game at all costs!

Controls are rough, if you crash it starts at the very beginning every time.

This is a game that wastes your time and effort 👿

Most stupid game ever! Hard to steer and if you hit the wall it's hard to get out of it. Toooo many ads as well.

Ok,so it's THE WORST GAME EVER

Game is horrible do not get it is waste of time.

Wish I could give this zero stars, 3 bumps to the car and a 5 second ad. Go off the track 5 second ad. Don't waste your time downloading.

This is a awful game and if I could, I'd give it a 0 star rating. When I start the game, a commercial comes on which I don't really mean mind that it's just that there's too many and every time the commercial ends, it shows my car on fire and says game over

How do these apps even get past Apple? A two year old could write this app. Seriously?