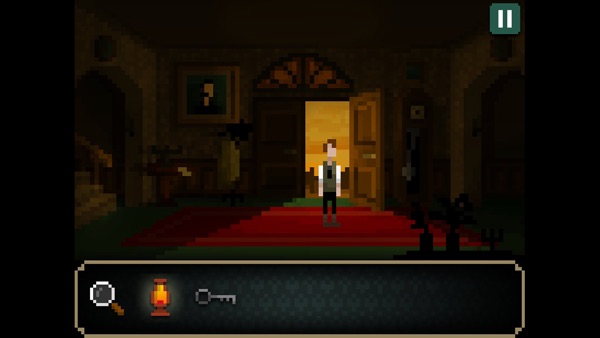 This app has been updated by Apple to display the AppleWatch app icon. - Fixed a critical bug causing crashes in the game.

Feel what it’s truly like to be alone in the dark with this low-res, high-suspense point-and-click horror adventure, winner of multiple Best Games of the Year awards. Set in Victorian England, when Jeremiah Devitt receives a letter from his old schoolmate Anthony Beechworth with a hidden, cryptic message, he knows something is wrong. His journey to an abandoned manor is only the beginning as he starts to remember a long-buried secret from his youth, discovering things man was not meant to know, and opening doors that should have remained closed…

Paid for the full version, but once I get to the basement on chapter 2, the game glitches and I can't continue.

There’s a reason pixelation was replaced by decent and then excellent graphics: pixels look horrible on a graphic-rendering-ready screen. Randomly tapping areas of the screen is the only option in the very first episode because everything is a giant blob and unrecognizable from all the other blobs around it. I feel bad for the pixels. They should have been given a better chance to shine.

Awful game. Can’t see anything. Even with the walkthrough, I can’t see the rope I’m supposed to get in order to hang myself. Disturbing beginning.

The beginning of this game made me hate it 100%. It starts with you gathering a rope and chair and fixing everything for a suicide. Then you take your character, put him on the chair, and watch him dangle until his arms fall to his sides. I don’t care what quality the image is or if it is just some pixel character, this is not acceptable anytime or anywhere. This is not what I expected and even just watching would have been better than actively being a part in it. I’m severely disappointed and this game now repulses me.

Free episode works. Episode 2 freezes in the prologue on a black screen. Devs promised update on forum, have not delivered. Do not buy until they resolve this issue, as app is worthless for current iOS iPad users.

As another review mentions, chapter 2 has a bug with black screen and no responsiveness right after the first scene. Why did so buy this? For chapter 2 and on. So immediately after purchase I'm hit with that bug. Forums show this issue has plagued iOS versions of this game on different chapters / scenes at different times. Sloppy.

Had a good time playing episode one, but after purchasing remaining episodes for $3.99, game crashes after title screen. HELP!!!

Won't load at start up after new iOS update. They said dev said they would fix problem-that was a year ago

No longer loads after update

There's a bug that the developers have been aware of for 4 months, where the game simply won't move beyond the initial loading screen. Since it hasn't been fixed in 4 months, I consider this game a lost cause. I'll try playing on another platform.

It just gets stuck on the initial loading screen no matter what I do.

Looks like it would be a great game, but I can't play it. All I get is a loading screen. It needs to update with iOS.

I'm getting an endless load screen. Not sure if this is an issue with iOS 9 or my iPad mini.

I downloaded this a few days ago to my iPhone 6 and it won't get past the loading screen. It will, however, ask me to rate it every time I open it.

I'm on an iPhone 6+ and it's just stuck on the loading screen whenever I open it.

I was so excited about this game, but it never starts. It gets stuck on the "Loading" screen with the animation of a little bro walking. Trust me, I let my phone sit for half an hour while waiting-- It doesn't work. Running iOS 9 on a 5S. Help a sister out, tech support!