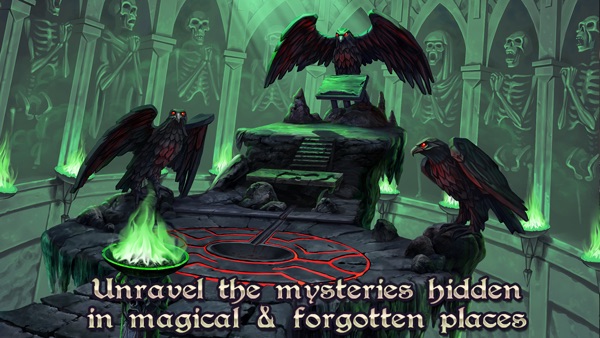 This app has been updated by Apple to display the AppleWatch app icon. This update includes stability improvements and minor bugs fixed. Thank you for your loyalty and all your great feedback! We try to improve the game for you to enjoy it. Keep playing Bathory - The Bloody Countess!

The name of Elizabeth Bathory is associated with blood and fear. But now, few centuries later her story seems to receive a thrilling continuation. Get down to the bottom of the legend and save your sister in Bathory: The Bloody Countess, an eerie hidden object puzzle game.

Your little sister has always loved mysteries and adventures, and that’s why she became an archaeologist. But ever since she was summoned to excavations in east Slovakia, Rose suffered terrible nightmares of a dark hooded figure. Anxious about her last letter, you come to see her just to find out that she vanished. Now it’s up to you to learn the truth behind the ancient legend of the Countess Dracula before her castle claims another victim.

The history of almost every country has a controversial figure whose sins and virtues have been debated for centuries. While most of the world knows Elizabeth Bathory as the ruthless serial killer, many biographers still claim that she was slandered. Taking a twist on different theories and speculations, this hidden object adventure game appears a stunning entanglement of legends and evidence, history and magic.

Dare to enter the world where myth and fantasy are interwoven, where heathen beliefs and rituals are still a commonplace. Challenge your i-spy skills as you decipher secret messages and uncover ancient manuscripts. Explore mesmerizing locations of a remote village lost in the Carpathians and search for clues in beautifully drawn seek-and-find scenes. Collect gold coins and buy various goods to help you crack the mind-twisting riddles and escape the deadly contraptions of the medieval keep. Stop the blood rite before something darker than the myth itself comes to live in Bathory: The Bloody Countess, a haunted hidden object adventure game.

I honestly thought after downloading this game would be pretty low quality. Like those terrible free timed H.O. game apps (won’t name any names) lol. But instead I was very pleasantly surprised! It can get slow at times, and I still don’t know what the coins are for, since I have been able to progress without them which is a good thing. But after the free trial ended I had no problem paying the fair $2 price for full game, and hints are free:) I do recommend! Edit: The coins are needed to progress by buying items from the local shop owner, which I have collected plenty of by the first time I’ve needed them by optional HOPuzzles. More fair than many other HO games I’ve played.

Immediately upon starting the game, and almost every two minutes, the player is bombarded by an annoying and persistent ad that WILL NOT go away and forces the player to wait for and press the close button to continue playing. This used to not be the case and it’s very annoying!😡🤬👎🏻 Either take this out or give me my money back! Such a shame because I used to really enjoy this game.

I had started to like it so when it said I need to pay $2.99 to continue I thought it meant there would be much more. About an hour later I finished the game. I'm mad. I would have liked this much better if it was worth what I paid.

Same HOS scenes over and over and over, nothing exciting, and nothing to do Bathory whatsoever! Very boring gameplay, it plays itself, not challenging at all, and very very short. Mechanical at times. Abrupt ending.

I was excited to play...Until. Now in order to continue, I must pay for the app. If that was the case than you should not have a free one available!

I would characterize this game as just OK. I wouldn't spend more than $1.99 for what is a run-of-the-mill HO exercise, particularly one that requires revisiting spots time and again to see whether an HO scene has come to life. I was pleasantly surprised by the storyline and found it more engaging than most; I took the time to read through the transcript rather than quickly clicking to get through it, as I usually do.

I really enjoyed playing this game. I don't really like puzzle game much but I loved this one. Except for one thing. I was having a good time getting excited and then it stopped the game and said I had to it the full version. What the heck? I am now kind of upset because I finally find a good game but of course it costs money. I recommend it if you have money.

Not one of my favorites but enjoyabe.

I'd like this game if it wouldn't run out of memory space. I beat the bad guy but I can't see it. What the looney tunes is going on!?!?!??!

One of those games where you really do have to think about each move and the path you take in it!

I payed and played the rest of the game, and system glitch screwed everything. I cannot play the game even if I changed the player... I want my money back!

This game is a blast. I loved the puzzles, and it's a a really interesting storyline. The only problem with the game, and I think it's a big one, is that once you solve the puzzles, and save your sister, that's it. There are no other stories, or other puzzles. All you can do is repeat the same game. I bought this game at a discount, and it was well worth it. However, had I paid full price, I'd feel a bit cheated.

Love Absolutist. City of Fools was my first, this is following behind, looks good...

This is definitely one of my favourite games on iPhone, it is really addictive and never gets you bored. Thumbs Up..

Excellent graphics, great sound, and wonderful gameplay. Thoroughly enjoy it! Kudos to team behind this game. Must download.

Can't stop playing this addicting game! Happy I got this. I really love this game its freaking awesome

This game keeps me up at night. I really would recommend it to all my insomniac friends. It beats watching TV!