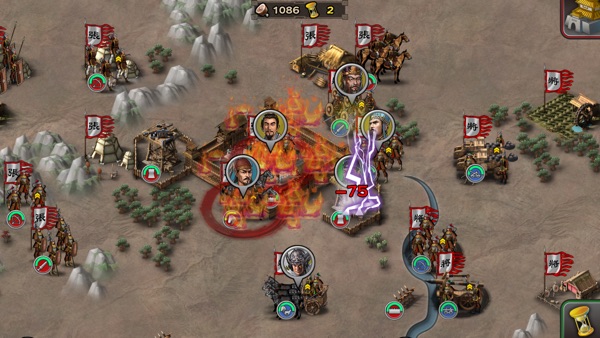 【Feature】
There are over 240 famous generals to choose in the Three Kingdoms period. Each of them has the unique combination of skills.
29 units are ready for you to command. Every troop has its own distinguishing features and if you can master them efficiently, you will be invincible.
Over 100 different items will bring you competitive advantages in battles.

【Campaign】
About 20 Chapters and 80 famous Campaigns are included. Plenty stages with great stories will make you feel personally on the scene.

【Conquest】
You can seize all 14 provences and unite the whole country. Being the Emperor or not ,it is all up to you.
Rome and Yamatai are all eyeing the Central Plain.
You can challenge other players all over the world. March towards their cities!

【Achievement】
Rising from a civilian to an Emperor with over 100 achievements.
Obtaining plenty resources and treasures.
Obtaining special generals.
Ranking among players in every provence and the whole nation.

The game is unplayable it will not let me make my nickname shorter fix your game.

The only reason I didn't give this game one star is because I used to have a lot of fun with it. Now Iplay this level and when I've destroyed the entire enemy army and I'm about to win, my entire army is imobilized for no good reason until turn 21 which is when you lose. It's happened to me three times on this same stupid level

This game is finally in English and if it didn't have so many network errors this would be a really fun game. The game is just about unplayable. Fix the server and this game will rock.

You need to add Chinese language as an option. How can a game based on Chinese history but now have Chinese characters? Make this improvement and it'll be a five star

This would be a great game if the severs were reliable. Sometimes they are down all night. Oh well. The game itself (when it works) is really good. I really like the combat. I don't like the free to wait aspect though and the maps are not balanced well. Personally I think I will just spend the $11 to buy Koei's Romance of the 3 Kindoms on iOS though.

I love Three Kingdoms based games. But this is nearly unplayable due to their lousy implementation of network connectivity. Every move that results in a change to resources has to "sync", which introduces a 2 second delay if successful, longer if not. And not seems to be the norm. About a dozen times I have attacked and won, I do not get the rewards because of network issues (yet other networks based games work fine). Please take this "feature" out! Attacking other players can get nearly impossible, as they can surround the city center with more towers, traps, and ramparts than you can field troops. A lot more. Jade gifts and rewards very stingy. Make it off line capable!

The game itself is pretty good. The biggest issue is that the internet connection to the servers is very unstable. Sometimes I spent more time in clicking the reconnect button and waiting than actually playing the game. I will stop playing the game until they fix the issue.

Game play is great, it just turned out to be the biggest hoax. I want my $19 back. Very dissapointed. ***Update***08/13/15 The game now has trouble login in. what a complete joke, always says "network error"

Ive bought and played almost every one of tour games but im just gonna say im an american and i um... Dont exactly um... SPEAK CHINEASE!!!

This game looks fun with new mechanics, but there is no English!!!!! Just translate it and you will get a lot more sales. The game even forces your name to be in Chinese!!!!

I am a big fan of the games your company makes. I wish there could be more games like this on the App Store. Most of the people who play your games speak English. Please do not let your loyal costumers down and translate the games into English too. A lot of people like the European war games the most please focus more on what your customers want. That's is how you make money. I hope you take us seriously and please read our reviews - antfab15

add population of countries European war was much better style

I have played every single game you have made. I have been very pleased up until now. I can't read Chinese and because of that I can't play the game I have no idea what's going on and I consider that I've wasted a dollar until you update the game to have english. Thank you.

Please make an English version, looks great but I have no idea what is going on in the game!!!