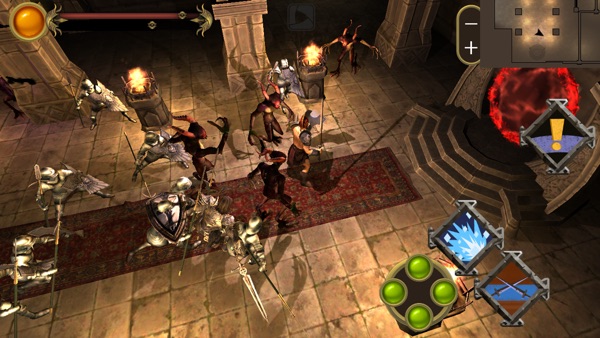 “I have a real RPG to play with on my iPad now!” -Denin, Touch Arcade Forums

The Barbarian is a full, action packed RPG game designed to have a desktop-like feel on mobile! Over 30 Hours of gameplay featuring 13 environments, hordes of over 100 enemy types and thousands of potential weapons and armor as well as a skill and class system that changes how the game can be played.

It’s an open world adventure that won’t hold your hand, won’t give you any 3rd-party “helper” character to tell you what to do next. There are puzzles, there are dead ends, there are hidden secrets and many quests for you to solve.

The Barbarian was made by a solo, independent developer. It’s my first big release, and I hope you enjoy it. The game is being updated often with bug fixes and new character models.

Your support means I can continue making more RPG games for Desktop & Mobile. Really, FULL Role-playing Games that don’t cut corners for mobile. Games without in-app purchase gimmicks, that are designed to be fun and engaging, rather than grinding and pay-to-win.

Let me know what you think! I think you’ll enjoy it! 🙂

If you get an error to update the game or the game version just swipe away and swipe back and it will put you in the game.

I want more of this game! Please make more areas to explore with a bigger world and more gameplay. PLEASE!!!

"This build has expired, please update". yet there isn't an update available. I can still play this version, is it the full version which I paid for?

It's a good RPG. I should know, I made it. Don't trust "it doesn't work" reviews.

I like this game a lot. For me it is ranks up there with Ocean Horn. Keep updating to make it great and I maintain my 5 star rating. Thanks also for making it a PAY ONCE AND PLAY game. This in-store app purchases business has gotten old, and a lot of times these developers do a very poor job.

I never bother to write reviews. I was hoping for a good "pay once and play" option. This was not it... Wish I had my $10 bucks back so I could buy gems in some crappy cash store game. Lesson learned...

If you have an older device, even a 4s, do not buy this game. It will not run on it. Do not get fooled into dumping $10 down the drain. There are plenty of games that are worth their price in the App Store.

The BARBARIAN. (Ipad mini 2 review) Virtual stick and buttons control ok. (Didn't test with m.f.i. controller) Adjustable/auto camera works. (Took 5 mins to get used to) Playable without internet access, after download! (Install game, reset device, close all apps/wifi/ect, low render graphics setting for best/stablest gameplay.) (Crashed once out of 6 hours of gameplay, due to visual effect?) Only buy if your device meets /exceeds minimum device requirements! (This game is as stated by the developer. Your not "gambling" with your app store money, when buying this game, its good) Casual/hardcore gamers alike will enjoy this game. (As a dungeon crawler fan, combat could be better, but you dont have to be an elitist to play this game) This game is 3-D, rpg/adventure, with real time combat. *Know when to fight/flight! If not geared* Lots to explore. Acceptable graphics. (Pretty water in sewers=weird...npcs look/act like they are about to turn to zombies within a few days=weird/funny) Game gets better the longer you play/upgrade/lvl/explore. Solid game. Could use minor improvements. (Turn shadows completely off option) (Music and sound effects should be separate audio options to on/off.) (Turn off/down un needed/extra visual effects to improve performance frame rate) (Mages should start with 1 cast-able ranged spell, before training.) 4 stars. Solid. Worth the money/time. Console quality on mobile. *Looking forward to playing future games from this developer.*

Ive been a gamer for 30 yrs and this is one of the better games I've played in a while. I've been hooked for weeks. I got up to level 71 before beating the game and had awesome gear, skills and training in plenty of time to utilize it thoroughly. This game is both challenging and fun to play. I highly recommend it. No in app purchases, ads or other BS either. Don't believe any of the somewhat negative reviews you may come across.

The updates are going well, this game is great.

I’ve watched this developer support his game on the TouchArcade forums and have been impressed with his dedication to this game. Absolutely beautiful graphics, MFi controller support, and super fun gameplay. Definitely worth the purchase — no IAP and a premium gaming experience on mobile. Way to go!

The thing with this game is this: why does a developer release a game for platforms that include the "higher" end devices in its lineup (iPhone 6+ with the most recent updates) and it NOT fully support its graphical capabilities (you do not have smooth animations unless you sacrifice shadows or resolution)? So, basically you're left with a game with a low frame rate, if you want the nice detailed graphics, even if your device is capable of displaying 60FPS with other game titles. I understand having the ability to raise and lower these settings for older devices to make it playable, but the TOP OF THE LINE device suffering the same fate? Kudos on this one man's gaming extravaganza creation (I cannot deny the achievement), but PLEASE....please enable or revise or fix whatever issue or code that will enable the iPhone 6 users to play this potent marvel at its full potential. We have the TOP tier device, so why do we feel like there are OTHER devices out there ABOVE it and THAT'S why it cannot play at the higher settings? What device (IPhones) were these settings meant to be played on or used and enjoyed by? Am I missing something here?

I’ll be honest, I was hesitant to try out an indie game from a new studio, but I’ve been looking for something I could play more casually and its been a while since I’ve tried anything in this genre. It took me a half hour or so to get used to the controls, but the learning curve wasn’t that steep (maybe because I’m not used to “what everyone else does”?). I like that it doesn’t hold your hand and just throws you into the game (no explicit “tutorial levels”). Bottom line, its totally fun. I’ve seen others moan about the price, but if it really is 20+ hours of game play, that seems like a fair trade to me. Especially since there’s no ads or annoying in-game-purchase BS. I haven’t had any crashes on my iPhone 5s, but when I tried on my iPad (which is a few years old) it crashed so much that it was unplayable. I guess the developers weren’t just playing it safe when they said the game needs a newer device. There are some graphics glitches that I hope get ironed out, but while they were distracting, it didn’t impact the actual game play for me. All in all, I have to say this is a really strong game for a new studio. I’m looking forward to seeing what they do next!

Will I like to play this...but all it does is crashes. Will not open...will not respond.. So don't buy this game. It crashes.. Good luck..😭😭😭😭😭😭..Please fix the problem or give my money back..this is not cheep. I will contact Apple on this matter no dout.Will I contact Apple and thay have not done nothing...thank's Apple...ready and see how thay are??????.