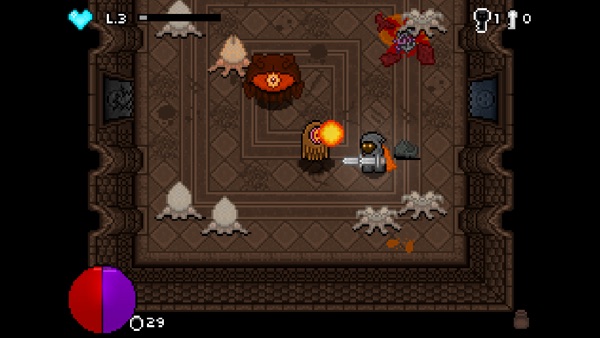 bit Dungeon II is fast action-adventure game with a giant overworld to explore.

You are a spirit in an undead world of demons. Your “loved one’s ” grave has been desecrated. Fight through these corrupted lands, and bring peace to her soul.

The dungeons are randomly placed in the overworld, changing your experience each play through.

Features:
[list][*]Permadeath You get one soul, and only once chance to retrieve it when you die.
[*]Steam Play Support.
[*]Each weapon type has a unique power attack including ranged, and magic weapons.
[*]Level up based on which weapon you use.
[*]Randomly generated items.
[*]Giant difficult dungeon bosses.
[*]Enemies with disgusting faces.
[*]Original Chip Bit music by Stress_tn.
[*]Controller Support.
[*]Once you beat the game it starts over, play forever, become stronger then… a god.[/list]

This game will not work on iOS 11 please fix

I've been with you guys since bit dungeon 1 , I've enjoyed the dark souls like concept but we need more weapons and items variations and the final boss was way too easy . Also all of my black coins disappeared after I resume to the game . I am a huge fan of but dungeon but you guys need lots of improvement like stated earlier.

i had to start all over. i was on the mountain which had a campfire. i rested and sone space dude came out of no where and he was stuck in a bush. I accidentally dropped my weapon and i couldnt pick it up. fix this bullcrap now.

I encountered the same issue others have reported of starting a game and being level 1 and naked upon log. I noticed that I did it start game rather quickly so there is a chance it didn't have a chance to load all of the game data before entering the game. I've uninstalled the game as it's not worth time investment only to be stripped and level one upon reliving in.

Fun dungeon crawler. Fix the instant loss of all progress to get 5 stars.

I'm updating an older review, I was around level 130 and had nearly 2000 coins, come back to my game and I'm now level 1, 13 coins and none of my hard earned items. I bought the first game 3 times due to different phones and I am very disappointed with this game.

It's a simple fun game that can pass the time for a short period but if you want a RPG game that tracks progress like Final Fantasy this is not for you. After each death you pretty much start from the beginning.

I can't believe that I lost and I had to start over. Also, it is really difficult almost impossible to find any weapon. I lost everything and I can't even find 1 black coin. In other words, I have no gear or nothing in the game. I can't attack or anything. Just run away from enemies. I also get lost in world, because there is no map. The developer was probably thirsty for money so he ended up publishing an unfinished game. It had a lot of potential. And I mean a lot! I wish I could have a refund.

It has the potential to be a very, very good game, but as others have noted there is large chance of starting up your progress naked and level one after hours of gameplay. This generally makes players reluctant to invest any more time into the game. Edit: Dropping from a reasonable two-star review to a reactionary one-star review after the third time I logged in to a naked level one in four attempts. This is unredeemingly game-breaking.

Obnoxious as always to start an app when sound is off and just have it completely ignore it and loudly play its music. Not on.

It was free but I still feel cheated due to the time lost downloading and trying this poor game.

Everything when you die.

There is basically nothing good to say about this game if you liked the first one. EVERYTHING is worse. I put up with it for 10 minutes until I uninstalled. Good that it was free as it sucked so hard.

After playing for a hour or so of constant death I found myself quite successful and after beating a couple bosses I desired to rest off the game for about a few hours. I then come back to find my character reset but it left me off at a campfire and now I can't progress because the enemy's are far to strong for me to kill with no weapon. So all I can say is please, please fix this so I can continue playing this great game :(

This game is amazing until you exit the app for 5 seconds and then come back to see your back at the start. I'll change my review to 5 when this is fixed

Awful controls. Please add an option to use virtual "joystick" and attack button and i will give 5 stars

Great game except it won't save as it should, and I've had to restart three times after putting a fair amount of time into the game. Right now, don't waste your money until it's fixed.

I haven't even played the game yet, but it's unacceptable for a game to play sound when my phone is on Silent mode.