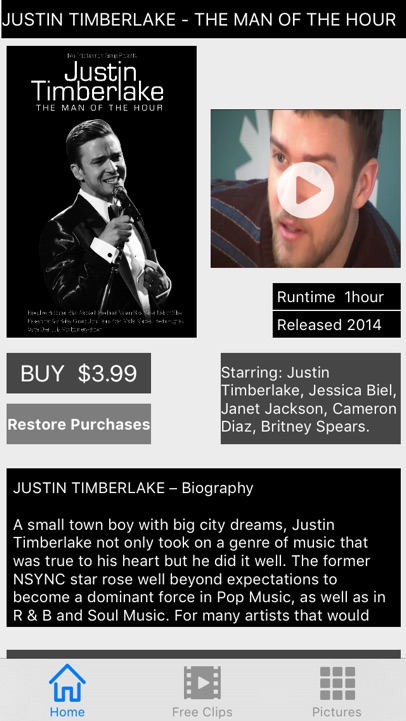 This app has been updated by Apple to display the AppleWatch app icon. Fixed the bug - the default images were not showing under free clips section.

Enjoy an hour film about the life of Justin Timberlake – there is no doubt that Justin Timberlake is the quintessential superstar of his generation. Throughout this documentary you will discover the ins and outs of his amazing career and personal life, including interviews with the man himself and with show biz experts. This is the truly remarkable story of an iconic superstar….Justin Timberlake.

Also included are free 30 minutes clips from his music videos, which are advertising supported. Further, enjoy 90 high-resolution pictures of Justin Timberlake. You may copy these images to your device. Please note that both options – stream and/or download, require high speed Internet connection, i.e. Wi-Fi. We do not support any streaming or downloading of videos over 3G network.

JUSTIN TIMBERLAKE – Biography
A small town boy with big city dreams, Justin Timberlake not only took on a genre of music that was true to his heart but he did it well. The former NSYNC star rose well beyond expectations to become a dominant force in Pop Music, as well as in R & B and Soul Music. For many artists that would have been enough, but for Justin Timberlake, that was only the beginning. He became more than just a music superstar; he’s the consummate Entertainerand Renaissance man.

Justin Timberlake can do it all; he is an Actor and a Singer, but he is also an Entrepreneur, Innovator, and Fashion Designer. Few artists have expanded into so many diverse ventures and successfully conquered them in such little time. With notable film roles in Alpha Dog, Friends with Benefits, and the critically acclaimed Social Network as well as successful stints on SNL, Justin has shown just how versatile a performer he truly is. Every time he seems to have peaked, he comes back with something bigger and better. Upon the release of the 20/20 Experience, Justin stuck with his roots and let the music speak for itself. It was one of the most highly anticipated and successful albums of 2013.

He is one of the most successful recording artists of the 21st century. From the Mickey Mouse Club to NSYNC, Justin Timberlake has gone on to become an international superstar as a solo artist. There have been many highs and lows throughout his well-publicized and extremely high profile career, from his break up with Britney, to winning the life time achievement award at the 2013 VMA awards.