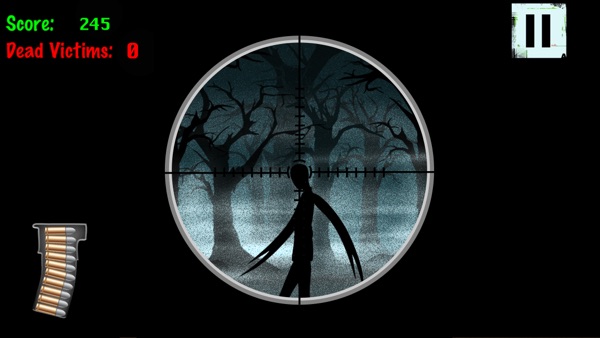 Aim & Shoot! Kill the slenders and become a Master Hitman. Tilt the device to aim and Tap to shoot and kill.

Don’t miss a single Shot….or you will end up losing the game!

It's hard to target them but it's fun

I like the concept of the game but the controls are like, inverted up is down down is up I hate those kind of controls dude :(

I don't like it..... I mean I play it on my iPod and I can't move can't walk and when I'm out of bullets I try to reload the gun but it doesn't work sorry but I hate it I dunno if it's just my iPod or how it was made

The slender game is Brian

Spider demon is part of the sky army

Cool but kind of pointless

Every time I try to move it it shoots and I use all of my bullets, it won't let me aim!

This is a cool game

Love the game, would like it more if you earned points and unlocked guns.

Th e shadows were cool looking and I liked the background but I just wish you didn't have to pay for the guns but other than that I thought the game was pretty cool.

Controls are garbage, it pops up a metric ton of ads, and the message telling you you're about to buy things through iTunes is blank so you'll get robbed if you aren't careful. I wish I could remove it from my downloaded list.

I think slender man is a killer game!its super awesome!!who ever created it was a genius!!!but I wish they wouldn't make you pay for the guns.?Yo mama!!!