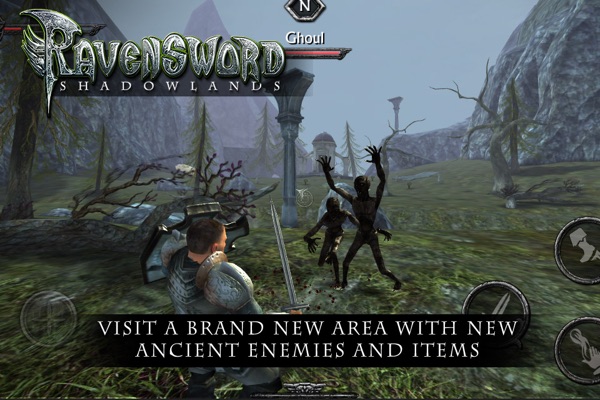 From the award winning studio that brought you Ravensword: The Fallen King
and Aralon: Sword and Shadow, comes
RAVENSWORD: SHADOWLANDS.

Ravensword brings unprecedented visuals to the role playing and adventure
genre. Explore a vast and richly detailed world, gather powerful weapons, collect hundreds of items, increase your skills,
and follow a deep storyline to solve the mysteries of the Kingdom of Tyreas.

Follow us for the latest info and game news!

They lied, this game does NOT have controller support. I wasted money on another shady game developer! Trash! I tried 2 different kinds of controllers-my PS5 and my Speedy Game controller….nothing!

Game crashes on my iPad any time I try to read something. I tried the reboot and it still crashes. I can’t continue after playing for an hour. Waste of money.

Was enjoyable open world rpg, till last update. Now every time I read a scroll or book the game crashes.

I spent 4.99 on coins and got no coins it’s horrible anyway that quest don’t even tell you were to go worst game ever

The game itself is fine. It’s just I have made purchases from the store within the game and of course it charged me but no items. I purchase gold, exp, and talent points. There is no way in game to support a support ticket to address the issue.

Used to be one of my favorites, but now with a fatal bug that can’t be corrected with a reinstall: Boxes are missing from citadel which prevents completing the main quest (in addition to the missing boxes, the second temple key statue now appears in the middle of the room with the green liquid- how very strange, as the game appears to be conflating the two different rooms. Help?

I was being chased by tigers (or whatever they are) went into a house- now when I try to leave I am killed immediately. I can’t travel via map- or fight back. I guess I have to start the game all over and lose all of my progress. Fix this!!!! This game should work better than this!!

Brought this game because it has controller support but guess what? Does not work . Waste of 7.00 bucks

This game is advertised as letting you customize your character but you can only be a male.

As the title indicates I have not received the items I purchased in game. They are not in my inventory or anywhere to be found. So spending 7$ on the game and 4$ on the item, this shouldn’t just happen. Please fix ASAP.

So previous powerful devices don’t get the new lighting effects, when they are more than up to the task. Thanks for leaving us out, I’ll remember that when you come out with a new game.

This game less then a minute into gameplay huge glitch game crippling this is the first iOS game I have bought total waist of money.

Just purchased this, but it crashes every time I want to read a book. Very disappointing.

The first time I played this I had to go to the east forest to fight some stupid goblins and I can’t even do that because they kill you in like 3 hits and it takes me 4 to 5 hits and once I kill one the others see me and gang up on me, how do you fight in a small cage how?

The Steelseries nimbus does not work in this games current state.

There are a ton of weird graphics glitches. NPCs run into wall all the time. They seem to be short cutting their paths to go directly to their destination. And mfi support is just broken. If I turn on my nimbus controller, the hud disappears as expected but it is completely unresponsive even in menus. This was a great game before.

Just started the game...whenever I try to read a scroll or book in my inventory the game crashes...please help