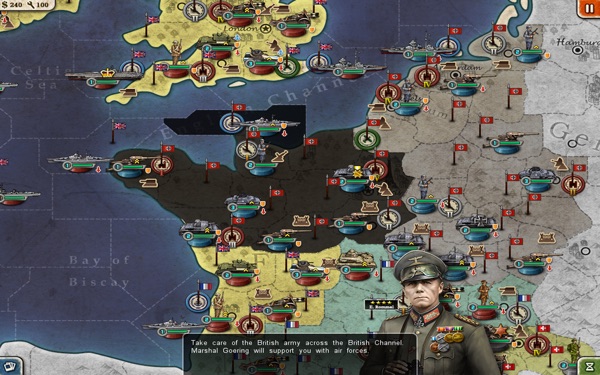 In World Conqueror II you will be a general to accomplish a lot of important campaigns during World War II and Cold War. You can fight with or against those famous generals including Guderian, Rommel, Patton, Zhukov, Nimitz, MacArthur, Yamamoto, Montgomery and de Gaulle. It’s so impressive to see their unique tactics and ace forces. Patton and Rommel are well-known for their panzer corps, Nimitz and Yamamoto for their aircraft carrier fleets while Goering and MacArthur for their air forces – all of them are one and only. It’s your choice to be a part of the Axis or Allies in WWII, but only after that can Cold War scenarios be unlocked. As campaigns go on, different equipments of each nation would come on the stage. Germany’s Tiger Tank and the Soviets’ Katyusha Rocketare two of the most powerful weapons, to name but a few.

With more and more achievements during the war, your commander will grow from a soldier to a marshal and acquire kinds of special medals which help boost the effectiveness of your troops in turn. In addition to single player mode, we also provide online PvP mode so you can cooperate with or fight against other players from all over the world in campaigns.

why do i have to wait 5min in conquest mode between turns? why do the norwegians take over sweeden? why did you make the balkans look the way they do? why did you have to remove all realism and fun? why do i need to perform operation sealion, a doomed project in the real world that never would have worked? why did you draw poland as an oval? why do none of the boarders look good or realistic? why do i keep seeing romania take a third or the soviet union and norway taking out sweeden and finnland alone? why, on earth, do the french fight so well.

I ALMOST BOUGHT METALS FOR 4 BUCKS BECAUSE THE SCREEN DOESNT LOOK LIKE IT IS SELLING ANYTHING. THERE ARE NO PRICES OR OTHER WAYS TO TELL. BE CAREFUL

Initially, I thought it was a decent strategy game. However, it's designed to be too tough for normal play. They want you to pump more money into it to be able to fight battles. Crappy deal!

Don't waste your time installing. App won't even open and you'll just be frustrated as you send it to the trash, reinstall, get the same error, rinse and repeat a few times until you give up.

I just got my new 13 in macboo pro 2019, and i really enjoy games like Risk or Hearts of Iron IV and this was the closest to them that i could tell and when i downloaded the app it would never open!!!! I dis-installed it and re-instaled it 20 TIMES!!! and it sytill won't work!!! HORRIBLE!!!!!!

I have a MacBook Pro (13-inch, 2017) running Mojave and the game will not open. I've deleted it twice and re-downloaded it twice. The game keeps showing an error when I try to open it.

This game does not launch don't waste your time downloading them

I concurr with earlier reviewer who said it simply doesn’t work in High Sierra and consequently should be pulled from this site if its’ creators will not contiue to support it. It’s a waste of people’s time to leave it there and shows a. lack of respect for Apple customers.

States devloper needs to make this optimized for MAC

Looks like it could be fun, however the app closes immediately when I try to open it

The pictures looked compelling so I downloaded it. Unfortunately, I could not get it to run in High Sierra. Every time I tried to open the App it would automatically close and eventually unexpectedly quit. I sent the crash log to Apple. The developer should pull the Application if the do not intend to support it!

the stupid app won’t even load. waste of time. every time i click the app to open it, it pops up in the dashboard, then disappears like i closed it.

Just purchased this MacBook Air, and this app was the closest thing to a Risk game I played on a Microsoft Computer, It was free so I installed hoping that my spouse and I could play together. Each time I try to open the app it says the app unexpectedly closed. I deleted it and re-installed, same problem. Their support offers only two options; 1st. see in apple store, 2nd. See in Microsoft store. Looking for any support from either just leads back to the same page, so it circles. Wasted 20min. Just to attempt at playing what did look like a fun game. What a shame.

It's not a realistic game and it's very unbalanced. If you want a fun game (but again, not realistic) shoot for one of the European War games. Either side has a chance to win. The Allies have no hope in the conquest game here. Combined units seems to not make as big a difference in this game either. I've seen some odd battle results where a group of heavy tanks can get destroyed by infantry and armored cars. Disappointing after playing the others.

I had 4 tanks all with extra experience and the computer had 1 armoured car and one tile left on the board and it still managed to destroy all of them and then hang in there for 5 more turns. It was ridiculous. I find that this happens a lot. Also it is obviously designed for you to spend money on medals so you can upgrade your generals and units faster. (I refuse to pay an extra $20+ just so i can beat the computer. There are way better games out there.

the gameplay mechanics aren't historically realistic. The best way I can describe it is that this is a war game that bears no resemblance to the historical conflict. by that i mean that if you want to succeed you spend the game doing things completely differently than if you were actually there fighting in a war… you explore and take control of hexes and gain their resources per turn, you build units right there in the game map, you don't carry over resources from game phase to game phase… this is basically a weakly 4X war game that would probably have been better fit to something like space exploration or future warfare than WWII. the first phase begins with the german offensive in north africa and this game would have you taking your tanks through the deep desert to wheel to the south and plunge through the heart of the Sahara and then go muck about in the jungle rather than heading for the oilfields by way of Alexandria. If you are cool with all that then you might like this game. If you aren't then don't. Also: this is a game that clearly is intended to cash in on in-game sales (you can buy in game resources for real cash via a medal system. The difficulty level is meant to coax an additional $20 or so out of the player.) Again, if you don't mind, go for it, if you think that's sketchy, then don't.

I have liked this series from Easy Tech to purchase them despite all of the faults. If you are interested in what they are, examine the comments for others in the series. This one however, which should have been the best of the lot because it is the most recent, is frustrating difficult, perhaps impossible, to beat. In the Campaign section, if you choose to play as the 'Allies', you are given a sequence of battles to win that must be won in sequential order to unlock the next battle in the sequence. The first one is a battle for Moscow. You cannot control all of your forces; only one section of them. The rest is controlled by the very inadequate AI of the game. However it is not difficult to win this scenario. The next battle is 'Midway'. If there is a way to win this scenario, I would sure like to be told how. You can only control half of your very meager forces and there is no way to adequately built up enough units to defend against, let alone defeat the Japanese. I have come close but always lose because the scenario has a turn limit; a turn limit that you have no way of determining until you use it up. This game is therefore the worst in the series and I do not recommend it. UPDATE for ver 1.3.1: None of the previous faults have been corrected in this latest version. 1.VIctory conditions are not listed; it is pure guesswork. 2. The turn limit problem also applies to the other Campaign section scenarios. This makes it impossible to devise a winning strategy. 3. You only control a small portion of your units and you cannot move them out of the way. 4. Etc, etc. Still a poorly written and executed game and despite the low price, the level of frustration is simply not worth it.