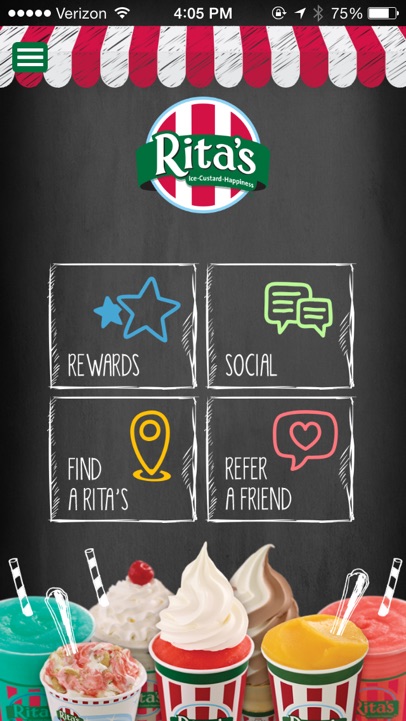 If you’re a true Rita’s fan, this app is for you!
Find a Rita’s Italian Ice location near you (enjoy Rita’s wherever you go), earn FREE treats and find exclusive offers.
Ice + Custard = Happiness!
Remember to use it every time you visit to earn punches towards FREE treats.

— The Rita’s Team
*Continued use of GPS running in the background can dramatically decrease battery life.

This reward program doesn’t work. I had it scanned a few times and it doesn’t count towards the reward. It doesn’t work! No use for the app.

The when you try to create a new account it brings you to a blank screen that doesn’t finish the process, despite updating and reinstalling app. So the app is only useful to find a store location.

The app is cute but pointless. You click on full menu you it takes you to the website. The website even tells you to call for flavor options. You can’t even order on the app. They’ve had since Rita’s closed last year until now to have it fully up and running

I really wish Rita’s would go back to a punch card because this app is terrible. I have my app scanned every time I go however at least half of the time, it doesn’t count towards a reward. At first, I was getting a “punch” every other time I was there (which was bad enough) but the past few times I have gone, my app is scanned but nothing shows up. On a different note, most locations near me just have “call for today’s flavors” instead of just listing what is there. When I have called, the people on the phone sound annoyed I’m asking. While I love Rita’s, this app is not doing anything for people.

The app has been great. I love to see it be point based. The app worked well at the window. I cannot wait until online ordering comes. I love Rita’s and love supporting local small businesses.

I’ve tried and tried but this app just doesn’t work. Try to create an account and nothing but a blank screen comes up. Waste of time. Been trying since before free ice week and nothing works. What’s the point of an app if it doesn’t work?

It never works. It says can’t connect to the network. I uninstalled and reinstalled three times with no luck. Fix this please.

We have been to various Rita’s locations 3x so far this year. Every time I have the associate scan the app reward code and so far none of the purchases have registered. Fix the app!

Old app was so much better and easier to use. This one won’t let me get passed registration because of a “service error” even with the new update. I have been trying every day because it is the only way to get the free small ice reward, but it is impossible to use.

I thought the app was a good idea, but it makes you dig for information and isn’t the best to navigate. Other apps tell you what your deal is and what size. I tried to redeem my free ice for spring, and I had the app pulled up and told the lady that I had the app, but she didn’t ask me if I was redeeming anything and I didn’t know I had to tell her that I wanted to redeem my free ice until she told me it was too late. She didn’t scan my QR code either to put a stamp in my account.

I have used the Rita’s app the last year or two and it was fine til this most recent update. At first it requires me to re register all my information and would lock up when I tried to submit it. This happened several times so I decided to delete and reinstall the app; now it says my email and password don’t match the records, to use forgot password and reset it. I tried that and it said it successfully reset and it still tells me that it doesn’t match. Very upset with this issue.

I have the app but when I opened it to get my free water ice it made me download the update. After I did , it asked me to enter my registration info and update password. Now the app is completely stuck on registration page and keeps saying I can’t change birthday even though I didn’t try to. So I never got my free water ice

It doesn’t work. And I’ve been emailing with Rita’s for weeks. I’ve had 5 visits. They scan the app and still the visits aren’t there. Now it’s telling me to register. When I’ve been registered. And I can’t even do that.

Tried to use the app the other day and it required me to complete a new registration page. When finished I clicked on “Complete Setup”, I got the message: “Once birthday is set it cannot be changed.” I couldn’t get past that so I couldn’t get credit for my purchases. Have tried updating the app and deleting and reinstalling it - still run into the same issue even though they say it’s fixed. Frustrating that I couldn’t use the app and won’t be able to use for their free ice special. It’s as if they released it without putting it through its paces.

Clownass app making you download it a day before spring for free Rita’s. Every mid food chain does not need an app. Do better.

I had 2 purchases toward my 7. I opened the app today and it said there was an update. I updated and the free spring one showed up but it wiped my previous purchases away. Not cool (see what I did there?😜) hopefully it will be fixed.

Rita’s has us downloading an app, making an account, updating the app for their 1st Day of Spring reward. Then we get to the window and they’re telling us the app isn’t working. That’s suspicious if you ask me. They were happy to take my paid order but I declined.

App forces user to enter more contact information, then after entering required information I get “once birthdate is entered, it cannot be changed” error warning. It never takes my information and I can’t get of the screen