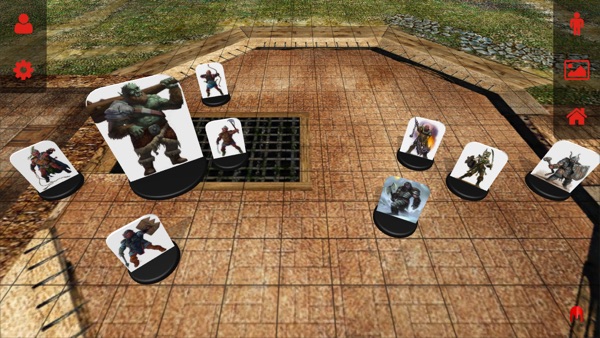 This app has been updated by Apple to display the AppleWatch app icon. • Bugfix. Temporarily backed out some features because the Account screen did not display properly for some people. An improved version will be coming soon, which will include the "Remove All Miniatures" button again.

Explore a map containing friends and foes. More than 150 miniatures and 12 maps are included or you can add your own from pictures stored locally on the device. View the tabletop from any direction, you can zoom out to see the whole map at once, get a top down view for counting squares, or look over the shoulder of one of your heroes at the monsters they are facing.

Start a multiplayer game to play with others, whether they’re around the other side of the word or across the room.

It’s purely a simulation of physical miniatures on a map, without any rules, like you would have on a table at home.

This is an old app and needs to be fixed or updated. Although it seems fun, you can’t sign into google to connect with your party. The developers should take this down or correct their mistake to stop wasting peoples time in downloading it.

Cannot play with others, requires Google+ to log in and always fails, and has done so for about 2 years (no app updates for 4 years). Do not buy. It’s a shame because it really was a great app when it worked, and I don’t know of anything else like it on iOS. Closest thing now is EncounterPlus which can do a lot more, but it’s also much more complicated to use. This had some nice little features, but it’s more like a first impression of a useful app than a complete app. If they ever do work on it again, it needs a few things to make it more useful: - Easier to import images and adjust them (EncounterPlus does this fantastically well - tapping on the name of a creature searches for it on google images then you just drag the image onto the creature in the app and it auto-imports it) - A simple toggle or hold button for fog of war removal - allow drawing in the map for spell FX, etc. - Easier/more intuitive grid alignment (again, something EncounterPlus does better) - allow import of “decals”: images that lay flat on the board always (for AOE spell fx templates) and can be resized or made transparent. - Subfolders, tags or categories for organizing assets - Fix multiplayer to work again If it had all those things, it would be amazing and I’d pay at least $20 for it.

Google+ shutdown a year or so ago, so the entire multiplayer feature is unusable. Now how am I supposed to play D&D with my friends during quarantine?

This app may have been good in 2018, but now that google plus is gone, worthless for mulitplayet

Apparently this requires tools that google discontinued years ago. This is a dead app that's no longer functional.

The idea is sound, but it seems no more development is being put into this. With google+ shut down, this app is really not useful. Thanks anyways.

This app is amazing, but it can no longer be shared with others since Google+ is down. Please update this app to make it shareable online again! I’d love to use this tool and be a paying subscriber!

The app is an awesome idea. It works almost perfectly and has no annoying adds. But the main idea behind it is that the main user can host a map and share it so others can view it on their devices. You can’t share maps or connect with others. Sadly the app is almost perfect but if you want to be a dungeon master letting their players view the map with you, plan on passing your device around.

It won’t let me sign in and play with friends. A error screen keeps popping up so now all I have is a shell of a app that I can only look at but never play. Apparently you’ve had this problem for a while but have failed to fix it. I’m guessing you’ve abandoned this game and now you’re just sitting here getting paid by apple for the people who download it.

We paid for both he app subscription and online and both times they shafted is the site goes down they say nothing DO NOT. Get the worthless app or pay any money to these thief’s they’ll take the money and run

Sad. So much potential but without basic features like being able to delete maps, easily move minis etc., this app has severe limitations. It appears that no updates have happened in years so it’s safe to say this app has been abandoned.

Imagine having to pay $1 a month to use the map in your house for your D&D sessions. This app has the audacity to charge you .99¢ a month to host and join your friends to play dungeon and dragons on their poorly contstructed app. If you are looking for a good hosting platform for your D&D campaign, use Roll20. Not only is it free, but it has more features and is generally a better deal than this ridiculous app.

I can't do anything I can't even figure out how to delete the pieces! This is ridiculous don't buy.

Imported a new map. The app no longer loads. It hangs on start now. Not functional.

I have a 1st gen iPad. The app crashes when I try to sign into google + . If problem is fixed I will raise stars. App is great idea. It just doesn't. Work for me yet.

Latest version crashes on open, if you use this to game, be wary.

All I have is some maps. So if there's more to this let me know but as it is...not happy