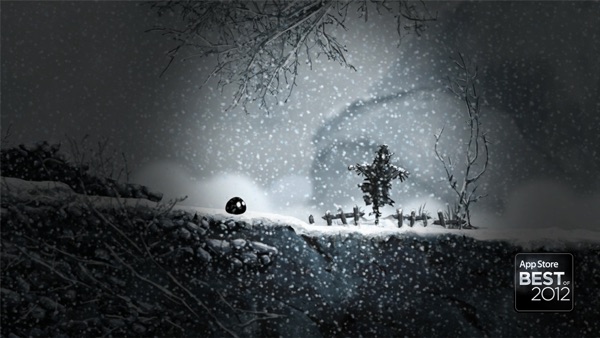 This app has been updated by Apple to display the AppleWatch app icon. Fixed blocking issues from last update.

Has to be be downloaded over a Wi-Fi connection.

Discover the beautiful world of Nihilumbra and join Born on his adventure to find himself whilst trying to escape from his inevitable curse.
Born was created from the absolute nothingness: The Void. But somehow he separates himself from the black emptiness and appears in the world. This is where his long odyssey begins, in which he will learn how to use the colors around him to gain powerful abilities and transform the world.

However, his experiences come at a high price. The Void must be one. It seeks to reclaim him and will never stop chasing him, destroying everything in its path along the way.
To survive, Born will have to condemn the earth he walks to its inevitable obliteration by The Void…

– Use five worlds as your canvas and transform them at your will.

– Unlockable surprise on completion of the game. Replayability assured.

Just like SMB if you don't like a soundtrack. Description was totally inaccurate. Worst ever. This exact *thing* is why I hate buying games you can't preview.

so bad game play and story

It keeps shutting off after about a minute playing.

It closes midgame all the time! Especially on volcano levels. It's fun but the bugs are infuriating.

Great gameplay and game physics! Love it! But I don't like being constantly told I am nothing. One star.

I like this game on my iPhone but it won't open on my iPad. I see it's been over 2 years since it's been updated.

Just upgraded iPhone and it seems to crash on iOS8.

I got a 64gb Iphone 5S. Works great. Play Heroes of Order and Chaos with it. No problems. No lag. Gave hard-earned cash for this app. DL'd it. It tries to open, and then crashes out. THE GAME WON'T EVEN OPEN! I got 30 gig space left. What a joke... Where's the zero stars when you need it...

And I bought it to enjoy on this new large screen :( edit: 3 months later and it still crashes when opened.

I have an iPhone 6 and I can't even open this app without it crashing on the loading screen one second after opening it. I don't know whether this is because of iOS 8 but I have deleted the game and renown loaded it three times with no success

I wish I could write a review but this game crashes at startup! If you fix this bug and I am actually able to find out anything about this game, I will happily review my rating accordingly. Please fix.

This game does not open on Ipad air2

I want my money back! Fix in the coming weeks? 8.0 has been out for a long time. So what gives ?

The game is crashing at the beautiful games screen every time. I am trying to play it on the 6+. I hope you can fix this cuz I really enjoy your game.

keeps crashing every time I go to open the game I get to the beauti fun screen and then it crashes!

All it does is crash. Please fix. I just payed 2.99 for it 4 hours ago and haven't gotten to play yet.

Its not opening at all. Crashes as soon as i open it