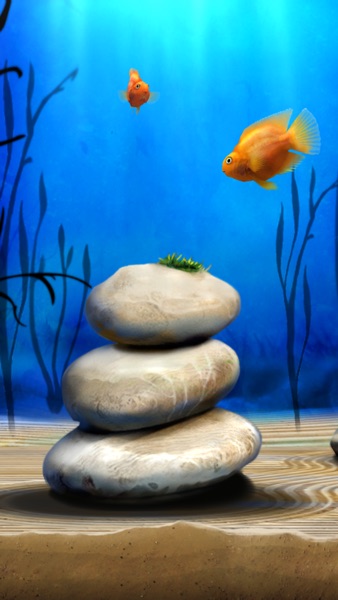 This app has been updated by Apple to display the AppleWatch app icon. Improved compatibility with the latest generation of devices. Fixed some graphical problems on iPads. Thank you for playing iQuarium! If you like our game - please do not forget to rate it. In case of any problems, please contact us at support@idreams.pl

For everyday stress iQuarium is more than enough to relax. Chill out while watching your Parrot Chichlid fish swimming in its tank, feed it, play with it, interact with it or… do nothing – just listen to your own relaxing music and the air bubbles climbing up slowly to the water surface and let iQuarium soothe you and calm you down. As time passes by you will find new decorative items in your inventory so you can arrange your relaxing space whatever way you like. Just don’t forget that your fish is a living creature and it depends entirely on you what kind of personality it will develop! iQuarium provides a sensation of relaxation and calm but still delivers tons of entertainment and fun!

*Any in-app purchase removes the adverts in the game and unlock the full version.

Love this but no updates!

I’ve had this app for almost 8 years. I had to have an upgrade & as there’s always a new update. Now everything is gone I’m having to start all over! I want my fish bag of things that I’ve heard I think I got some of my points back but this is ridiculous!

After about 6 days of play and feeding I got my sunken chest. Two days later it was gone and available again in a day. Bait and give us money.

This app was so "awesome" until y'all made it impossible to remove the adds! I would even purchase the add-free package if there was an option. Adds are not that bad on the iPad but on my little iPhone4 it takes up half the screen!

I downloaded this app since my old aquarium app won’t run on iOS 11 anymore. I was hoping this would be a good alternative. I love screensaver type stuff and this is ok for a freebie, but I’ve been running it for several months now and feeding Carl (my goldfish) everyday, but what’s up with only one fish? I mean, I have every type of tank decoration you can think of, but where the heck are the fish. As far as I’m concerned, the various types of fish are what makes an aquarium fun. Who would only have a single goldfish in a big tank? Only someone who’s lost interest in keeping fish, that’s who. Besides, you don’t even need a big tank for a single goldfish, just use a fish bowl. I just read another review where another person said after 3 years, they only have 2 fish. If that’s the case, the. I quit.

ever since ios11 it constantly crashes which is a shame because I used to like this app.

This will be the 3rd iQuarium app I’ve had. Instead of updating the app to work with a new iOS, they come out with a new one I have to download. The old apps are then useless, & you have to start all over again (and buy NEW in-app add-ons). Either you don’t know how to update your existing app, or you’ve got quite the racket going on there. 😑

I got this and it crashed once already after 2 min. also, everything takes so long

It hasn't been updated in a long time they gave up and moved on obviously and I have been getting messages saying this app hasn't been updated and it's slowing your phone I update now . Then the newest message said this app will not work with your latest phone update. So all my work on my tank is for nothing:( I have 8 fish the sparkling food makes them have babies btw for those who wanted more fish .

Are you ever going to update and enhance iQuarium? It certainly doesn't seem like it and it becomes very boring as it is now. You say in your help file that you are constantly working on enhancing and improving the game and yet there hasn't been an update in two years. I'm very disappointed that you have chosen not to keep your word to those of us who believed your promises.

It's pointless as hell.

After a few days banner ads will appear. An aquarium is supposed to be peaceful and calming, but that defeats the purpose. I uninstalled it.

Can you possibly make the app any slower?

I have had the iPhone version for quite a while. I have 2 fish and have gotten lots of stuff like a crocodile skull, buried items, etc. My big beef is you have to wait so long to get the next item. Okay, say it says you need 9862 points to get the next freebie. It says in a "few days". I started tracking from August 20 and it took until November 3 to get it - NOT a few days by a long shot. I went in multiple times a day in case that gave me more points. Not sure. But it is too long for a dumb crocodile skull and I refuse to buy stuff if that is all you get! Plus - will someone correct the spelling of "Comming soon" (it should read coming) I am tired of seeing it and knowing that this app is being handled by people who can't spell. Now it's October of the next year and still no new items!!

After a while, the app starts showing ads. Even in "child mode," accidentally tapping an ad removes you from app.

I went to feed my fish this morning and everything was gone! 😭

What is with the ads. I downloaded this to relax. The ads are very annoying. That's all you see. Such a terrible idea. Ruined an awesome app with these ads.