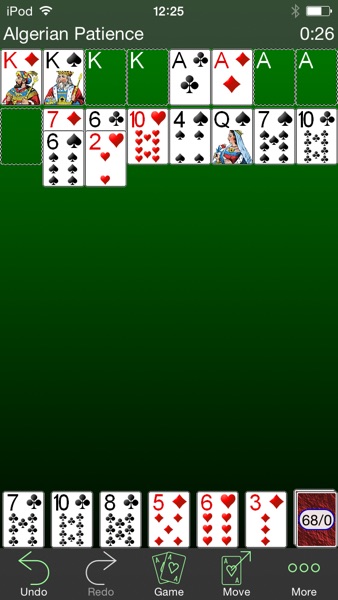 For each game, there is a demo and a text description of the rules. You can view playing card games demo with a step-by-step solitaire guide. So trying new solitaire games will never be a challenge again.

If you are a board games fun, you’ll love application settings agility. It can be customized for any kind of card player. You are able to set common game options, animation, game table background, cards style, and their back view.

Suddenly all the ads are in Russian. I will be deleting this app from all of my devices.

I actually think this game deserves more than 1 star, but I’m hoping maybe this low rating will prompt the developer to fix my issue. I tried to contact the developer directly about it, but they never responded. I’ve been playing a long time, so the number of games played (on one particular solitaire) is pretty high - probably over 2000 at this point. Many months ago something happened after an update such that my totals are in the billions (if not trillions). I just want this glitch fixed so I can see actual statistics again.

I assume this repeating noise is from an ad that’s about to be served, but it’s intolerable. Nothing has been able to stop me from playing Pyramid on your app, but this has done the trick.

So……they did a. Bug fix…..uh it added a bug….like BEE’S Buzzing, and extremely irritating! By by….and. Forget about app support it doesn’t exist!

Whoever made these changes and whoever approved them need to be fired.

When attempting to move a run of cards it only moves the bottom card. For example, want to move a run on 5,4,3 to another pile that ends at 6. It will only move the 3 and not the 5,4. Please fix this.

I don’t mind pop-up ads: that’s the price of a free game. But your advertisers are some seriously sick puppies. I’ve started turning my iPad away from me and closing the ad just to avoid the visuals. So you will never sell me anything.

What did you do?

I deleted this app, although it was great. Just could not stand the CONSTANT NRA ads that popped up after EVERY game. I may reinstall later, BUT NOT NOW!

Originally, this was a great selection of games and worked well. However the new version of the game now seems to have many bugs and does not work properly. Unfortunately It was not useable and I deleted it from my device.

Once this was a great app now it has an ad after every game that you have to X out of. So annoying that I had to delete the app.

I have been playing this game for several years and thoroughly enjoyed it until the last 10 days when it appears you fixed a bug which keeps the game in a loop. It will not retain the game options of 2 deals or shuffle and keeps reverting between a really old game and a new game with a new score. I have deleted the APP several times and reinstalled but the bug remains. I have lost all interest now in playing this very flawed game.

Doesn’t have my favorite game anymore. La Belle Lucie. Since that was the only game I played on this I will not be using this app anymore

UPDATE: new version seems to have eliminated pop-up problem (cited below and by others) by replacing it with bugs and other annoyances. Now, 1. When selecting a “another solitaire to play,” a blank, white screen opens that blocks further use of the app until the app itself is completely closed (by double-tapping the home button) and then re-opening it. [iOS] 2. New version wipes out wins under “current series” (all games), requiring player to start over. 3. Unobtrusive banner ads have been replaced by intrusive full-screen ads that are slow to load and remain on screen for over 5 seconds (there’s actually a countdown!) before they can be closed and play resumed. Earlier review of app problems (b4 app update) is below. This app is intelligently designed and plays well. Or, rather, it did. Now it’s not playable at all. Same recurring problem that many others have been pointing out for weeks: a pop-up message that tells the user, “Item No Longer Available.” Which item? This message pops up without the user’s even touching the screen—repeatedly 10–20 times in rapid succession, making any of the games unplayable. Prior to this development, this had been a 5-star app, but now it’s now worth the free download, let alone an upgrade.

I have had this game for years. Newest update has destroyed it. Sound doesn’t work right, the undo button is a disaster. Have to say goodbye to this one and look for a new one!!

Remove Sexual Content Ads from your game. Children play and should NEVER be subjected to this adult subject matter.

I wish I could upload a screenshot of my current game. When I backup and try to replay it doesn’t back up the game the way I played it. The current game Forty Thieves (2 deals) has suits at top filled to 6 of diamonds and 7 of diamonds. Those are the only 2 diamond suits there are or will be in this game. However, I have a 2 and 3 of diamonds on the board waiting to be played. I feel this is a ploy to have me purchase the pro version. Why on earth would I purchase a game with such poor programming?

Doesn’t count games correctly, doesn’t undo correctly can’t move cards. Nothing works as good as before update. If their objective was to destroy this game - they couldn’t have done much worse. Doesn’t even rate 1 star.

And here’s how, The placement of the cards was better The size of the cards was better The option of where the ads show up is gone, and on top of that they now cover the entire screen.....very disappointing. And , in the case of double pyramid, it has lost the feature that knows when you are out of moves. In the past I’ve always given this game a 5 star rating, it’s always one of the very first apps that I download onto a new device. I very much appreciate that it’s the free version as I’m limited in what I can spend on goodies. But I’ve noticed I’ve stopped playing it like I used to. That was, every night, now it’s occasionally. I hope the developer can change it back. 🙁 Well, goodbye 250 Solitaires, I don’t love you anymore