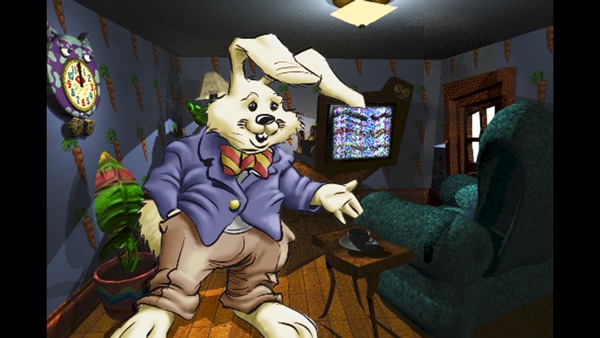 We've made some fixes and improvements: - Added iOS 15 compatibility - Added support for running on M1 Macs with macOS 12.1 or greater. - Fixed save and restore of current game state.

Welcome to The Manhole! From the creators of Myst, The Manhole is a silly, delightful, interactive, busy-box-of-a-world that kids can explore and explore – finding something new around every corner.

This award-winning romp transports children to the fanciful world around, above, and beneath what appears to be just an average, everyday manhole. But there is much more than meets the eye – have tea with a rabbit, wake up a walrus, nibble biscuits with a dragon, hang with a penguin, boat with an elephant, speak French with a turtle, and much more!

First released in the 80’s, the original version won rave reviews and numerous awards including “Best New Use of a Computer” from the Software Publishers Association. This Masterpiece Edition was produced in the 90’s as a ground-up re-make of the original with meticulous computer-rendered scenes layered with delightful hand-rendered characters. There are over 30 original music compositions and scores of original sounds and voices.

We had the computer CD as kids so it is a delight to show it to our own kids now.

So excited to be able to play this game again under iOS 11! Thank you, developers, for continuing to support this app!

I am so glad I was thinking of this game the other day and so glad I just downloaded it! Better than I remember and I forgot how whimsical this game was... thank you for bringing this to us in app form! Worth the $1.99!

I missed this one when I was a kid, but loved Spelunx and Myst. I've had so much fun with this, both by myself and sharing it with my 3 year old daughter, that I genuinely wish there were more games like this! (And, of course, that I could get Spelunx for either iOS or Mac!) Don't pass this one up. It's a true gem!

Years ago I worked for Broderbund selling our products to retailers and demonstrating them in computer user groups all over the us. I bought this for nostalgia but also to see my kids enjoy this. I love the literary allusions to cs Lewis and Alice in wonderland and the pre myst game play but the exceptional music wins the prize here. This is gorgeously redone with enhance graphics from the cd rom.

This is a precessor to MYST, in that u can see its influence on how MYST was made. This is a kids game but still looks like MYST. Haven't played yet but giving five stars cuz cyan deserves the support! Can't wait for Obduction!

If you have trouble with the sound, check the toggle switch right next to your volume button. The sound in the game didn't play at all for me until I flipped that switch. This brings back memories :-) One of the first games at ever played, at around age 5. Although I played the black and white version on an old Mac Pro, none of this color / touchscreen fanciness :-)

I loved this game as a kid and played it for hours on end! What a joy to have it on a mobile device! Just wandering around and listening to the music is a great way to de-stress and stroll down memory lane!

I loved The Manhole when I had it years ago and eagerly downloaded it when I saw it would work on my iPad… only to discover NO SOUND - unless earphones or external speaker are used. Since the music is the very best part of The Manhole this makes it utterly useless IMO. Please fix!!

This was my favorite game growing up. This game is what essentially turned me into a gamer nerd and it even lead me to other great point and click games (i.e. Riven and Myst) when I found it on the App Store I did not hesitate to pay the 2 dollars, and now this game brings a year to my eye as it blasts me back to my whipper-snapper days!

Well I don't have to load my HyperCard... :-) I loved the original Manhole and to have the experience again and share my childhood super-memory with kids that I love is so awesome. I think it is inline with the story games kids are playing now. Excited to spend more time in the Manhole World!! Thank you for giving me this back! And also another vote for Cosmic Osmo!

Parents, take heed: this game is old. Ancient, by software standards. It's an early 90s upgrade to a late 80s game, ported to iOS with no revisions. That said, the geniuses who made this game basically invented the point-and-click-everywhere game format that you see all over the App Store these days, so your kid will feel right at home in the Manholeverse. Underwhelmed, perhaps, but comfortable. It's a classic and a pioneer. That said, I wish the Miller Bros. would do a real revision of this game for iOS. I say that with some hesitance, because the structure of the game is really perfect. Everything fits together just so, and the exploratory, objective-free gameplay still feels like a refreshing change of pace. Updated (not bells and whistles-ified) graphics and sound, and perhaps more complex character interactions, would enhance the game's appeal to a modern child audience. iPad compatibility is a must. C'mon, Robyn and Rand. For old time's sake. (Also, a possible bug... Is Mr. Dragon ever in his house? I'm hungry for biscuits, baby)

The first thing my 5 yr old son said about this app: "Mom, this game is stupid. You can't pick up any clues to use later. There aren't any puzzles to figure out... It does nothing!" I gave it a second star, for pity, because I've already introduced him to simpler Myst-like apps, like Mystery Lighthouse, the Lost City, & Cryptic Keep. All of which completely engaged him from start to finish. He has a clever, hungry mind- and this app just wasn't enough of anything to keep his interest. Which doesn't really say much for an app intended for children.

Once I saw this on the app store, I had to buy it! I used to play this non-stop when I was a kid on my parents Mac IIci. This brings back so many memories! Thanks for bringing this to the iPhone Cyan!!! I still play this every now and then when I'm in a waiting room etc.

Except for the touch screen, this game is exactly as it remember it as a child back in the days of classic.

Here's another call to bring back Cosmic Osmo and the Worlds Beyond the Mackerel next. COSMIC OSMO PLEASE :)

I picked up this app because I loved the original Manhole on my old black-and-white Macintosh back in the day. This app, however, tries way too hard to be "goofy" at the expense of all the simple touches that gave the original its charm. Don't bother.

That is what this is and that's why I give it 5 stars. I didn't realize it was a kids game but it is. It's kinda nostalgic too. Recommended for 2 - 9 year olds. Keep it up Cyan!

Not quite the original, but brings back the nostalgia nonetheless. Here's hoping Cosmic Osmo and the Worlds Beyond the Mackerel is next!