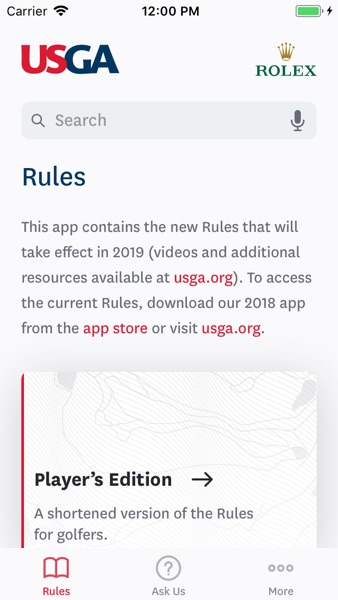 Thanks for using the USGA Rules of Golf app! This update includes: • Minor code updates. • Push notification fix. • No noticeable changes to app functionality for user.

The USGA’s official app for the Rules of Golf, which is always kept up to date with the latest Rules content. The following documents are included in this app:

• Player’s Edition of the Rules of Golf
• The Full Rules of Golf
• The Official Guide to the Rules of Golf (includes Interpretations, Committee Procedures, Model Local Rules, and the Modified Rules for Players with Disabilities)
• Note – The Player’s Edition is a shortened version of the Rules written specifically for golfers. The Full Rules and the Official Guide are designed for referees and tournament administrators, and are available after enabling Expert Mode within the app’s Settings.

Additional resources on the Rules of Golf are available at www.usga.org/Rules.

Used app a bit a while ago. Trying to use it now and I keep getting a “sorry try again later” message. Contacted support and they responded with a generic acknowledgement that I contacted them. Nothing more…

I’ve been a golf pro for over 40 years and feel like I know the rules of golf relatively well but since y’all re wrote them and made the changes, I can’t find many of the simplest rules of golf that have been changed or re written. I spend more time trying to find a rule for varification than if read the whole rules of golf. Mostly just venting but don’t understand why the rules are so confusing now and hard to find to show anyone proof of a rule. Johnny Dill , PGA Golf Professional

Get the message “Sorry something went wrong” RETRY Been trying for a few days now.

Doesn’t even open. What kind of joke is this?

Gibberish, Gibberish & Gibberish. Wow! Look at that oh! Look at this!. Gibberish Ohh what’s that!. Who’s there!?. Gibberish Blah, blah & blah... If this confuses you than this Application isn’t for you.

Its a portal to the USGA website. So when you are out of cell service area it is useless. Get the PDF for free on the usga website and save it to ibooks.

I am sitting in my office, next to my WiFi router and the app still states “no internet connection, try again” over and over. I have dumped it and reloaded and still cannot open this app. Useless.

The actual rules are nowhere to be found, much less the interpretations. Instead a seemingly random set of “situations” is addressed in no apparent order. Give me back the rule book and interpretations and get rid of this confusing mishmash.

I could not update the app on my iPhone or iPad--they're not new enough. This is the ONLY app I'm not able to update on my devices. So the new rules are available only to players who have new phones?

Tries to update with latest rules, but fails with the saying “Sorry, something went wrong.” Well USGA, sorry, your app is unusable.

Why no Index?? Previous versions had a Index which is so essential. Search function is not a substitute. Bad.

It's basically just the rulebook. I have a bag full of those. What would be handy is to have something that you could actually use on the course while you're playing. Like a Siri for golf rules.

TERRIBLE DON'T GET APP. USGA IS A DISGRACE. DJ NEVER DID ANYTHING

Great idea if it worked. I thought deleting and reloading would make the app work but it did not. Basically worthless can't get much to work. Rules, decisions, and most of the app is functionless. Don't waste your time until a major revision is engineered.

The app doesn't work. If you try to get support, you can't find it. Efforts to contact the USGA through their webpage only results in a message saying "server down". No stars.

So after I already bought and paid for the app a long time ago, your asking me to pay again for the decisions...

It would be nice to have the rules on my phone however most of the sections do not open on my iPhone 6 Plus! It seems like a waste to have an application it does not function correctly. Why release it before it's ready?