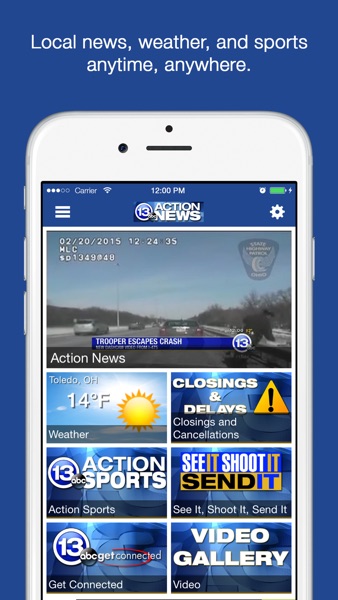 The circle in the middle of the screen spins and spins. App will not open. It’s worthless.

Every segment before commercials cuts off about 5 seconds early, and the app freezes while on a dead screen during commercials. Need to exit and restart the app which forces a new commercial then, by the time the news broadcast is back you have missed most of it. This is a horrible way to watch a local news broadcast - I’m not sure what the developers of this were thinking! I now watch a competitor’s news station, which is available on Fubo live stream.

This app runs ok on my iPhone. It will NOT run on my newer fully updated iPad. I get their opening ad, then nothing will load. I like the app and would give it a better rating if it ran. Fix it, please.

This app. Crashes frequently or just doesn’t work. And when it does it cuts out just before they go to commercial so you miss most of what they say and it comes back late from the commercials so you miss news that way also. You would think that a station owned by Disney could afford a better app. Or at least one as good as the other TV stations in Toledo.

I used to use this app regularly. Now I can’t get it to open for some reason. I have updated it and still no luck. It just crashes and closes as soon as I try to open it. I hope they fix it soon.

Okay. You released an update without fully vetting it. Crashes repeatedly upon launch. Shall we hold our breath waiting for a fix?

My wife using an older iPhone opens the app. I called the station about it and it worked for a little while, now it doesn’t load, just spinning trying to load but never does.

Can’t read the news if the app won’t open.

Pop ups, malware and fake news stories made to look like the real news stories in the feed. This app is a cornucopia of malware delivery. Too bad, I like local news.

Hangs up on startup. Probably outsourced development but definitely reflects very badly on the station. Delete!

Version 6.3.7 will not load on iPad or iPhone if Location Services for the device is turned off.

I used to like this app, but within the last week it won’t open. I have deleted and reinstalled, but it still doesn’t work. Please fix!!

That’s all I get! Tells me to retry but still nothing! As soon as I can I’m going to delete it for good!

i used to love this app and get on and check the weather and read all of the stories but now it literally is liberal garbage. seriously. what am i reading? news? or a story about how much these people hate our president. get it together i thought it was adults writing these articles. deleting the app!

I’ve watched this news team for years but finally deleted the app. It crashes regularly. There will be lead headline or breaking news notifications, but when you go into the app, the story isn’t there. Bad app. Deleted it today.

This app has too many ads and there are frequent misspellings in news stories, the weather shows the wrong time for sunrise and sunset, and mine right now (just updated) shows the wrong graphics for the forecast daily weather conditions. About a week ago I was getting only news stories from somewhere in Minnesota for several days before someone finally noticed and fixed it.. maybe it fixed itself who knows. Always crashes or just stops responding also.

The items should be listed in order starting with the most recent. When I get a notification the newest article should be shown first. The way it is now I have to scroll through all the items and check the time shown for when it was posted. Otherwise I like the app. 7/23/2020 updated review: If you will NOT put articles in order, PLEASE give me the option to do so. I will remove this app in one month if this issue is not addressed. Have you even checked how many one star reviews you have? If I could give zero stars I would. 7/26/2020 updated review: Now articles appear to be listed in order of release. Thank you! It’s a much better experience this way. I appreciate your addressing this issue. Improved my rating due to this update. 8/7/2020 updated review: Articles are not in order. Maybe the few days they were was just a coincidence. I am deleting this app.

I resent you only showing president trump begging for votes everytime I open the app. You are supposed to be biased and give equal time to all candidates.

As if it wasn’t bad enough that all of your articles are flooded with advertisements, now we have to sit through opening advertisements when we open the app too?