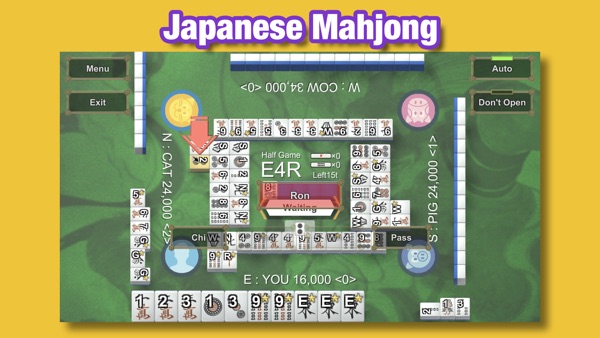 - Fixed an issue where Ends By Nine Kinds was enabled even though the tile was open.

This is a Mahjong game of the Japanese style rule.
The Slider that exists under the screen is moved, and the tile is selected.
And, the Slider is done in the tap and the tile is discard.
Mahjong is the game to finish four Melds and one Pairs.

However, there is a hand not approved when Chi, Pon, and Open Kan.
Please note whether there is a hand when you do 1 and 9 in Chi and Pon.
In the rule of the japanese mahjong, one or more hands are necessary.
The hand can be made by paying 1,000 points and doing Reach.
However, when Chi, Pon, and Open Kan are done, Reach cannot be done.
If it is a closed hand, high point will be obtained.
About Lost Hand. A hand that is Waiting, but cannot be won off someone else’s discard due to the fact that the owner of the hand already threw a winning tile in their own discard.
Lost Hand if one in all winning tiles are here even if discard doesn’t do the tile which it wants to do. But, self-draw is possible even with Lost Hand.
The knack is that Ron is never done by the other party.
Ron is never done with the tile that does Discard.
Please reason the Hand from other party’s Discard and win.

As good as it can get for an app. No micro transactions, no ads, no distractions, just mahjong. If I could give it more stars I would.

This a new review as the older version of this app was much better and less buggy, but once those bugs were fixed and this came out.... now I just played a game with over six West Wind tiles in the game! What!? Please fix and print back the old look. 🤷‍♂️ Update: the newest version is great! Thank you for such a good app!

I use this game to get better at Riichi Mahjong. It has helped a lot since you can get so many games in so quickly and the CPU makes you aware of every move possibility. The downside is that the game is way too hard and has no difficulty setting (confirmed with dev.) If you can still have fun losing nearly every game then dig in.

Dear developer, now that you are on unity platform, can we expect a droid version or something for my chrome book? Would it be possible to have rules and scoring help within the app instead of going out to website?

It’s the same (excellent) game underneath it, but the new user interface is, minus some improvements such as highlighting opponents’ discards more, bad. Tile faces are smaller, muddier, and largely obscured by the overlaid number. Blue dots and bams are nearly the same color. 3D is busier than the previous clear, simple 2D graphics and adds little. Unity takes noticeably longer to start than the old engine. I get it makes multi-platform support a lot better, but what price build convenience? Frankly, I’d pay to have the old version back.

This was my favorite mahjong app. It was simple, 2D, and very fast. Now they updated it with 3D graphics which makes it a lot slower with no way to go back to the original

Great Japanese Mahjong game. My only real issue is some of the settings don’t seem to have a way to save or exit, requiring me to force close the game. I’m experiencing this when trying to change player name and voice. Not a big deal, but still.

Keep up the good work! Thank you! Recommending this to all of my friends!

This version is a lot better than the out-dated version i was using and looks way better. (edited) Five star. [accidentally had phone set to silent]

Its pretty hard to find a good mah jong app but if you're looking for fast paced ai mah jong, you've found just what you were looking for. The only problem is that you can't play horizontally(only vertical) making it hard to press tiles if you have sausage fingers. It also has the ability to change from English tiles to japanese as well as the hands in japanese. Definitely a good purchase for any mahjong player to have a little fun.

Has good info for beginners. Play is fast. Don't like the voices. Sound strange. Don't like auto play after reach. But otherwise nice

Fabulous mahjong game on the app store! But would be even better with an iPhone 5 screen. Thanks!

Though I tend to play Janryumon online on my iPad, I play a ton of this on my phone. It loads fast, the AI opponents play instantly, and it plays in portrait orientation (which is a bigger convenience thing than it really seems like it should be). Highly recommended for fans of Japanese mahjong.

Plays very well, with many rule options. For japanese riichi rules mahjong, its probably the best english language version. Biggest drawback is tile graphic size, which would improve dramatically if it used a landscape orientation.

Good UI - very user friendly and fun game play. Been looking for anything besides the solitaire versions (what's up with all that anyway?!!) forever - this works!! WELL WORTH $1...!!

This is good for English speakers because the number tiles are in both Chinese and Arabic numerals. Also it gives a good layout of the rules.

Love it! Please update it to iPad resolution.

It's great all I can say. Would be nice if the voices were not robots

I'll preface this with it's a very good mahjong app. It does most things I want perfectly. Though the voices are annoying my phone is usually on silent anyway. That said your app seems to use a slightly different version of the Japanese ruleset. For instance a pon of dragon tiles does not give the one Han requirement. Also no terminals doesn't appear to give a Han if you open it, where it does in most variations of Japanese mahjong I've played. If I had some way to play under the rules we usually do in person, that would be amazing. All aside, it's still great to be able to play a quick game when I'm out.