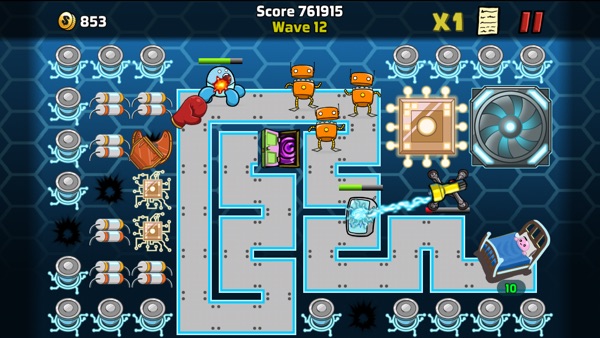 -Third time is a charm? -Fix for the broken level select scrolling bug some people are experiencing

There are Creeps living in your closet! Defeat the things that go bump in the night with toy blasters, glue bottles, flashlights and boomerangs. Summon a giant spider to slow your enemies, or a UFO to sap their energy!

I love this game have been playing for years, but it’s not letting me purchase any in app things. I’ve been trying to buy the packages the have for more levels and it will not let me

First off, I love The Creeps and have been playing it for a while. However, with the last update, the game was no longer scrolling properly and I had to delete the game and download it again. When I did this, the level packs that I had previously purchased are gone and they won’t restore. I’ve reached out to the developer but they haven’t responded. Very disappointed as we did support the developer through these purchases. Can only give this one star now.

Actually no, this time you did not fix the scrolling. After the second attempt to fix scrolling and stating in your update that scrolling is fixed (for real this time), it’s not. Haven’t been able to play game for almost a month. This is a great game but please fix glitches and add new levels.

Every update breaks something new. Cookies can’t be picked up, can’t scroll through levels, this is ridiculous!

I used to love this app. I have paid for the full version and played for years. They haven't done any game upgrades in almost two years except to put in annoying ads!

This used to be a great game, I played through it several times and even bought all of the additional levels. Now however every time you open it or finish a level it plays a 30 second ad for some other game that you can't skip. Every. Time. Incredibly annoying and takes up extra space on my phone. Pretty pathetic and underhanded, especially when you've already spent money on the game. They must be pretty desperate to make extra cash, it's really sad to see what was once an awesome game ruined by greed and spam. Deleting now and won't be downloading any games made by them in the future.

I have paid, why am I forced to sit through ads? Gonna have to uninstall

Used to be 5 stars, down to 1 as they've put ads in that make the game unplayable. After many years this app will be uninstalled. I've been playing this game for many years and it never gets old. Some of the levels are pretty tough but so far I haven't found one I couldn't beat with a perfect score on normal. Most on hard.

This game is fun, but with most mobile games these days you must be careful with IAPs. Save your money for real life.

I used to love this game a couple years ago, and now it crashes! I understand that my iPod is old and can't do a lot of things, but still this should not crash if I can download it. For most games it just gives me a message saying "Sorry this iPod cannot support this app. If you would like to be able to use this app you have to update your IOS to 5.1.0 or 6.0.0." I have barely any games that I haven't beaten because I've had all my games so long and for many they too have closed off and if I update them they will crash too. This happened with Clash of Clans too, I was maxed out everything and then I got kicked off one day. So this really pisses me off that I can't play such a fun game.

This game is great...if you just started teething.

I've tried multiple times to restore my purchases but the bird dinosaur(I'm not going to attempt to spell it) shows up for half a second and then nothing is restored. Please fix this.

This is a great game of it ever starts up. I downloaded the version 1.15.15 and it always crashes when you try and start it. I have an iPhone 3 on iOS 6 (I know, its old) and it won't play. I've had this game for years now on an old iPod touch (iOS 3 or 4) and i haven't updated it and it's one of my favorite games. Wish the newer version would work better on older devices though.

Even after the latest update, this still crashes. I've played several levels and it kicked me out. Now every time I try to open it, it goes black and kicks me out. I can't play . Used to be one of my favorite games. Please fix!

Purchased to unlock all levels years ago. Updates came and the app will not restore what I have purchased. Waited for a fix. It's been years, literally years and I still haven't had my purchases restored. Great game but for this reason it gets 1 Star. Original Review from 2012 ---Purchased this years ago, got a new iPhone and the restore feature isn't working.

I love this game and I love pirates but the new update I do not like at all... Every time I try to restart a level my screen goes black: the app doesn't crash, oh no, it just goes black and I have to get out and force quit and restart just to be able to play. Restart, yes- game says no :(

The new level is still locked for All Access Pass owners. They give you 25,000 "cookies" but it's not even a forth of what you need to unlock the pack. I paid for this new level years ago when I bought the All Access thing. Trying to get more money out of me is just wrong. I used to love this game but I'm so disgusted with the changes that I haven't played in weeks.