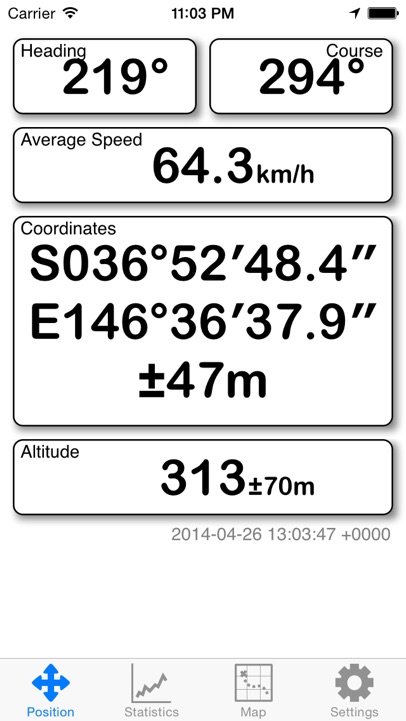 “GPS” gives you access to your iPhone’s GPS functionality and more.

The simple display shows your current:
– Heading (where a compass is available).
– Course
– Speed or Speed Average
– Coordinates
– Altitude

Street and Topographic maps are available along with aerial or satellite photos. Once viewed maps will also be held cached for a day.

And trace statistics including:
– Time and Distance
– Minimum and Maximum Altitude
– Average and Maximum speed.

Via the settings you can:
– Choose between Latitude & Longitude formats and UTM coordinates.
– Choose between meters or feet and formats.
– Choosing Speed or Average Speed.
– Keep your iPhone awake.
– Trace while GPS is in the background.
– Automatically pause when you stop.
– Shutdown when the battery started getting low.

more features are on the way…

I was looking for an app that would provide me with an aggregate of the GPS data, especially altitude (which Compass doesn't show). This gives exactly that, and a little bit more. Only reason I can see for reviewers giving this a 1-star rating is consumer confusion, as GPS has become a generic term associated with software that provides directions.

Coordinates aren't close, elevation will show + or - 50'. The map is horrible. Find another app.

This app is not to show maps or give directions. It is to give coordinates, elevation etc. and does it well.

This is a completely useless application that isn't a "GPS" just like all other Americans they don't care about anyone but them self they just want money. They don't care If you find your way.

The simplicity of this appealing, but the lack of a tracking function on the map is disappointing.

I am very happy with this app. I always read negative reviews before positive ones when I buy something to compare the complaints against the praises. I agree this is not a direction finder as much as a historian - I use it to keep track of my walks and give me a record at the end. If I could suggest one improvement it would be to have a trail line follow me on the map, but that's a minor thing. Fun app!

I read the info and thought this app allowed you to get a signal to use gps on your phone, apparently not!

Not a bonafide gps buyer beware

It won't work to find your location. I walked down the street and my location didn't change at all! Don't buy it!

A big joke, nothing works on this app, wish I had my money back.

Piece of junk, ad shows a nice graphic however actual display is plain txt. MPH does not work so slow and inaccurate.

This app has a few quirks (such as OpenCycle maps no longer loading, but there are alternatives in the app) and could use an update for things like retina graphics and more recent SDK technologies. But it largely works as advertised and has functional features and settings.

Don't get it. I want my money back.

Two of three "maps" are blank (unavailable?). The rest works as displayed. Hey, it's a PoS, but it was only $.99, and I SHOULD have heeded the bad reviews.

I love this app. The screen is easy to read and gives you the vital gps and altitude information. KISS keep it simple stupid and they did a great job.

Might tell you where you are but does not tell you how to get where you're going, unbelievable this po crap is even listed with gps apps

I like the app. Works as described, but I do wonder why a straight GPS app needs full internet access to function... One thing: can the developer or anyone guess as to why the phone screen goes black when attempting to put it into a waterproof case. Happens only with this app... No response from the developer on anything. That’s the reason for the rating.