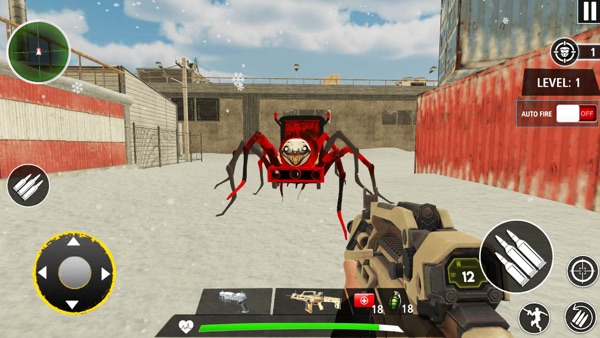 In this fps gun strike battleground shooting game and 3D effects available in this spider train and battle shooting war game. It is a battle between your squad and the enemies. Don’t scream and make any sound and watch-out for spider train web in this choo of shooting game. The monster in front of scary train is also the puppet of of your enemy soldiers. You must be fast and use more powerful weapons like guns, pistols, bombs for every assault, riffle, and sniper in the city.

If you still want to play fps gun strike battleground scary train shooting game then get ready and call your best shooter and kill your enemies. In this spider train survival game of scary train game run for your life from mysterious evil and fight against cryptid horror spider. Spider train horror game with lots of survival run from the evil spider and its soldiers, now is the playtime of your commando and gun shooting skills on scary spider train in this gun strike shooting game.