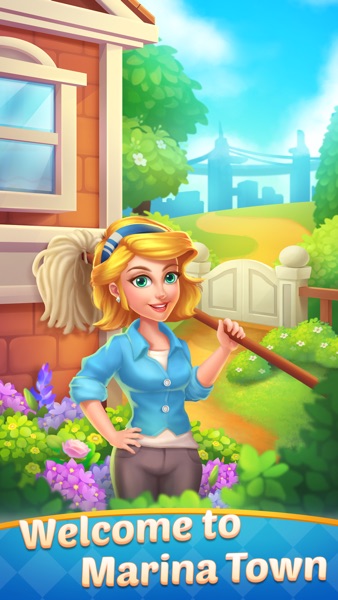 Design the city your own way
Match and combine resources to create a toolbox that can help you with the city design. Learn tips and get more inspirations from the latest decorating trends, pick your favorite styles from a variety of choices and decorate the city to your liking, there is a lot to repair!

Discover hidden items and create a new collection
Merge and collect objects that’ve been hidden in the city, they might come in handy later. More items will be discovered as you expand the city. Use them to repair the stores, houses, or sell extra items to make sure every shop has the best look.

More rewards are awaiting
Complete the gameplay, earn more rewards and gratitude from people in the city. It’s time for you to give the city an exquisite makeover. You will be surprised by your creativity and design talent in this renovation game challenge!

I like the game, it’s bright and colorful, really good for a phone game. It’s also very relaxing. However, I feel as though it takes forever for you to complete tasks once you get to a certain point. I’ve had the same two task for the last week and a half because the items I need are rare to drop from the generators and then it take forever for those generators to repopulate. Not only that but it takes a lot to level up the generators because you have to complete task to get chest and then those chest have sand or energy and rarely drop the parts you need. I I’ve merge games but I may delete this one soon if they don’t fix being able to complete task. If they fix this issue then I will be more than willing to leave a higher rating but not until then.

Enjoyed the game but had lots of issues with watching an ad and then not getting the reward for watching. And then eventually one day I opened the app and it had erased all my progress. There’s just too many issues for me to keep playing.

When is the next update? Been waiting 2 weeks.

Installed and it won’t open-constantly fines the “Loading” with nothing happening.

When are you going to have more tasks?? I’ve been waiting & I’m about to delete this game!!

I bought diamonds to get rid of the ads and I’m still seeing ads.

I was far in this game and some how all my progress got reset and I have to start over!!! Also this game is identical to merge city!!

I love this game!

I like the game but now I got so far it says I got to wait for updates for new tasks.so pretty disappointed in that! I’m only at level 20 at that..

I was enjoying this game until the update. Now it won’t even open. I even deleted it and reinstalled and it does the same thing. I have tried to find a the developer’s website to see if there were any notes on this, but this app isn’t listed on their website. Please fix the crashes for iOS.

Overall it’s a fun game, but it crashes too much to truly enjoy. Hopefully this issue will be fixed soon.

I've played quite a few different games exactly like this and I do enjoy the game play in this one a lot. However, the random ads that pop up when I go to ply the merging part are almost enough to make me stop playing. I already watch a ton of ads for rewards in this game, so having to regularly close and restart the game just to skip a random ad that has no reward is annoying. It's unfortunate because this merge game is pretty fun.

The only bad part is that you only get about 20 clicks and the time is out. But other than that I love it.

For a new game, it’s fine. It has a long way to go. Slow generators.

This game is pretty much like all the other merge games, sadly, you can only get about 10 minutes of play before you're stonewalled with timers. Graphics are nice, storyline seems promising but since I only completed 3 tasks, I can’t say for sure. To fix this early stonewall, please make The wheelbarrow & paint(?) unlocked items sooner. There are no items available to even make this a possibility.