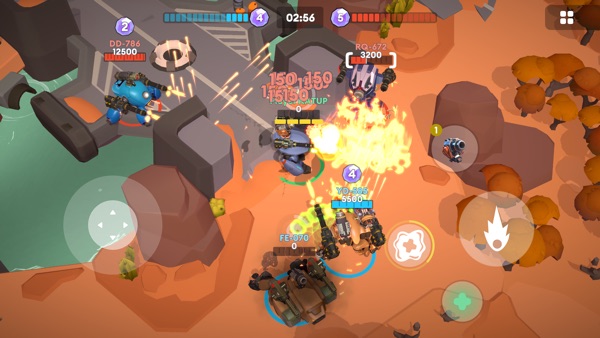 The HUGEst update is here! SUPERNEW GAME MODE! — DARKZONE! - Become the Little Big Robots battle royale superstar - Boost yourself and survive! SIX (6) NEW ROBOTS! - Everyone with new cool moves! - Take them to your dream squad SEVEN (7) NEW WEAPONS! - Arm these robots to the teeth! ROBOTS AND WEAPONS UPGRADES - Earn coins, gems and blocks - Make your robots stronger, and weapons more devastating - Scorch the battlefield with them! THE STAR TRACK - Get stars in battles and unlock tons of cool rewards on the star track! OTHER - Visual effects and animation improvements - Loads of bug fixes ENJOY!!

Fast-paced multiplayer battles with giant armed to the teeth robots! Fight in real-time battles with players all over the world! Operate a giant heavily armed robot and do whatever you want.

Crash entire cities, smash your rivals, step across rivers, set ambushes to catch you enemy by surprise and have a good time while gunning down your enemy. Play with friends or solo across a variety of game modes from 4v4 to Battle Royale.

Isn’t it enough for you? OKEY! We’ve got:

– ROBOTS! Walking, flying, rolling, four-legged ones but all deadly! Unlock and upgrade’em all!

– WEAPONS! Every cool robot needs some firepower. Find the best combo that fits your playstyle and show’em that big guns matter!

– TEAM PLAY! Team up with friends and destroy everything and everyone like a god!

– MODES & MAPS! Become the king of all game modes — from 4v4 to Battle Royale. Master those maps and dominate a battlefield!

Jump into the mayhem and make some PEW-PEW!

Add more mechs AND Titans so it can make that game more challenging and more exiting oh and btw make it that when u reach level 5 u unlock Titans k?

This games is the best! I had it before the newest update though I lost all of my progress and robots

This isin’t a war robots copy or a ripoff, it’s created by the same company that creates war robots. (Not developer)

This game is war robots ripoff but still good

I love the game its more fair to play and not stressfull and hard to get a win like War robots this game reminds me of the old times in War robots when it wasnt all pay to win thanks for making this game although when i get to the max level there isnt anything else i can do and it just slowly starts getting boring and boring, maybe add some new robots or guns?

Can you add new robots and modes

This game is pretty great, it has cute graphics and smooth frame rate. Although it’s great I beat the entire game in 45 minutes, it needs more to do. Also the health and healing system should be reworked.

This game was definitely fun to play, but it has just gotten stale with the lack of things to do. I got level 11 in less than an hour of playing. I have been waiting for what seems like an eternity to have any sort of new robot or even different maps. The game has lots of potential but I just see a lack of updates.

I like the game but pls fix this I only see 7 out of 8 players while waiting.

Hello, I am confused with a bug that doesnt let me get the ares. I got to lvl 11 before the ares came and i think it has something to do with that. Pls fix!

When ares came out I was level 11(max level) and could unlock ares but he wasn’t unlocked… How do you do it?

I like the update. but we should have updates and more robots to make this game really fun

Im level eleven but it wont let me use ares

Even if it’s a copy of war robots it’s just like it byte a cartoony cute version :)

Really love this game but it needs more robots like strider or fafnir, I know this game is based of of war robots so it’s pretty cool.

The makers of War Robots are trying to make a clone of Brawl Stars. This is the worst mobile game I’ve ever played. FIX WAR ROBOTS BEFORE STARTING NEW PROJECTS PIXONIC

This game is perfect for controller support. Get that; get five stars!