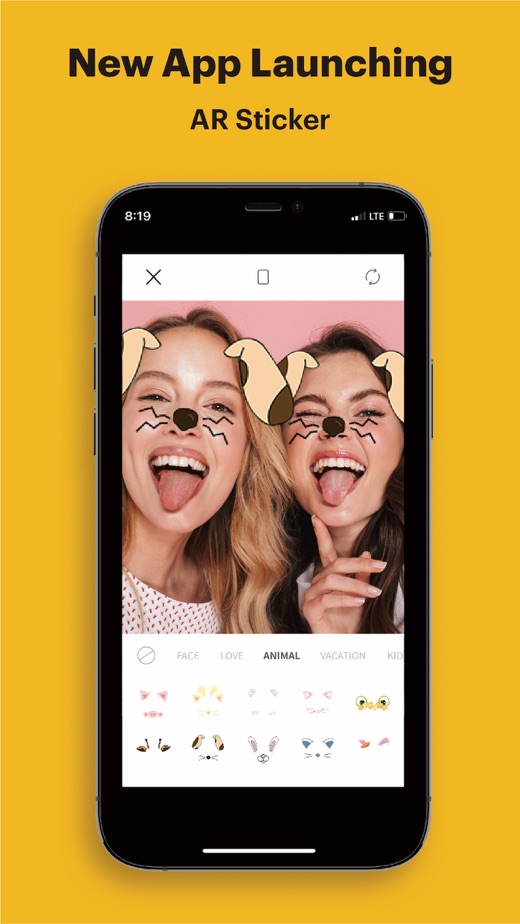 Thank you for using KODAK photo printer.
The previous KODAK Instant Printer app will be replaced with the new KODAK Photo Printer app. The new features including the AR and beauty functions will blow you away!

Easily print amazing photos with KODAK Instant Camera and Printer.
The “KODAK” Instant photo printer and camera can be used to print images from smartphones by connecting Bluetooth to the device.
You can take and edit pictures on smartphones or tablets. It will instantly print your precious moments!
[How to Use]
1. Make sure you recharge the printer before you use it.
2. Make sure the Adapter is connected properly.
3. Turn on the printer
4. Go to Bluetooth setting and find the printer’s MAC address.
The MAC address is placed inside the printer’s door
If you purchased Dock Printer, dock your smartphone at the pin on top the of the printer or find the MAC address on the downside of the printer to connect the device to the Bluetooth.
5. Select an image from the Gallery or take a photo with your smartphone.
6. Once image has been selected, edit the image with your personal preference.
7. Now press print button located on top of the printer when editing is completed.
8. When you print for the first time, it may need to update the firmware. Please follow the instruction shown on the screen of your smartphone.
9. It will take about a minute to fully print. Please do not pull the photo until it is completely printed.

I don't need this app to have access to my mic. Gave it access to camera and photos, that makes sense, but without access to the mic it refuses to move forward with setup. We’re fortunate the other app for instant printing still works - Kodak, please be responsible and test your new apps to make sure they work and don't have sketchy privacy issues like above before attempting to push us over to a new app.

It won’t print! I literally checked the connection so many times and it’s connected but when I push the big “print” button, it doesn’t do anything. All the other buttons work, just not that one.

iOS allows you to give apps selective read access to photos along with write access. This app forces you to give it access. To your ENTIRE photo library or it won't work. This is a predatory privacy-exploiting practice. Shame on Kodak.

There is a serious bug with this app where the photos print at a very low resolution regardless of the source resolution. It looks like the app is loading the image at a lower resolution than what is available. The old “Kodak Instant” app still works and doesn’t have this issue. To see the problem, try to zoom in (crop) a photo after you select it. Now do the same in the old app, or on your iPhone camera roll. The difference is very obvious, in the other apps you can see the detail that is there in the source image, but in this app it appears blurry. Tested on the P300R printer.

It stinks to have to write a bad review for a product, but this is the second Kodak product I’ve purchased that was awful quality (small insta heat printer and Instant Dock Printer). Both products yield terrible quality prints regardless of high quality image resolution. The quality for both products was so bad, I feel like I wasted my money. If you haven’t unboxed your product yet, take it back, ask for a refund, and go with HP for mini prints.

This news system might look better but it makes everything harder. Please give back the old one.

Im just trying to use my printer, and the app wont even load my photos, and if it does it wont show me my recents.

I just received this P300r printer. I love it! The prints come out really well. However, I have tried to no avail to print a collage. No matter what collage template I use, the app shuts down and nothing prints. After trying for 30 minutes to figure it out, I will assume there is a bug somewhere. App developers: fix the bug so collages print! TY! Overall I’m impressed. I will give this app 5 stars when the collage function works.

Wow! It’s mind boggling how such a simple app can be developed to be so buggy and without any self respect Kodak decides it’s ok to release it to their customers. Too bad…The retro mini 2 prints excellent quality photos but The app is so frustrating I’m returning the printer.

This printer doesn’t work with either app.

It is a pocket photo printer. I need add geo data, date, place, etc. I can’t even add text.

Did everything the instructions said and I’m young and very good with technology. Looked up multiple videos. This thing won’t even let me print anything. Terrible product.

Don’t buy the printer!!! The app requires you to grant access to all your photos to use the printer. I can only imagine that Kodak is making money from the data (photos) after you purchased their photo printer. I dont want Kodak to have access to all my images so I can’t use the product correctly. You can still use the old app, it will request for you to use the new app, and select the images you want to share with Kodak, then print. This is annoying but it works. I hope Apple looks into this issue. If this was a free service I would understand but this is an app to use a product and film that you have to purchase.

A terrible upgrade that wants to force me to give access to all my photos. You don’t need it, I won’t give it. Kodak responded to the above… in Korean. It’s that kind of attention to detail that is causing people to dislike the nonfunctional update. Can I give zero stars now?

Forced to update to a different app. Now, even though I have followed all the steps in my settings, the app still says ‘access denied’. It won’t access my photos and cannot print my pictures. Totally useless. 😕

I was forced to upgrade from the App that worked and I enjoyed using to this. Now I get an error message that I can’t access my photos. I have checked and double-checked my settings for this app. There are no suggestions on how to fix the problem I didn’t create. Now I have a Kodak PD460 that I can’t use because the developer forced an update onto my Apple product!!! SO disappointing. It’s awesome that you’ve added AR functions but stinks that you’ve made the basic function of printing a photo from an album an adventure of frustration. Did I say the old Instant Print App worked well?

Crashes every time I try to print a collage. Only stays connected to Bluetooth for a minute or so before needing to be reconnected (which sometimes it just won’t do). The prints are meh, but the app makes this a very expensive paper weight. What’s the point of overcharging for a popular gimmick accessory if you can’t develop an app that feels like it was made in the last decade??