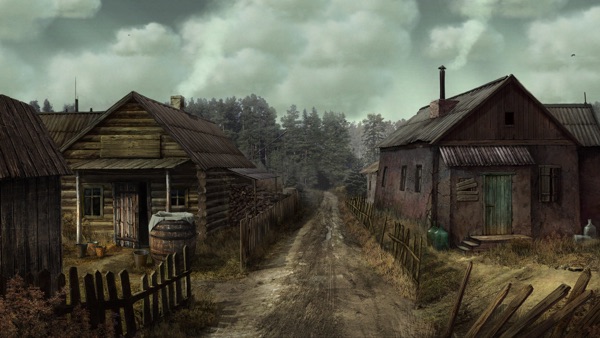 Prepare for a journey to a remote village deep in the forest, where strange creatures with glowing eyes terrorize the inhabitants. As the hero, you will investigate eerie phenomena and be drawn deeper into the village. The story begins before you even arrive at your destination…

The Wild Case is a 2D first-person point-and-click adventure.

In this story-focused adventure, players meet a cast of colorful characters, experience mysterious encounters, and solve puzzles to progress through the game.

The protagonist is a man who investigates strange occurrences—a sort of paranormal detective. One day, he receives a letter requesting help: strange creatures are terrorizing a village tucked deep in the wilds of the forest. With glowing eyes and an uncanny ability to evade hunters, these creatures may be more than mere beasts.

The adventure begins as soon as you arrive. You delve into the lives of the village residents before gathering the courage to travel deeper into the forest. The normal rules of life don’t apply here: if you want a service, be prepared to negotiate.

Be ready to ask: Who saw what? Why do they think the supernatural is involved? Will they help or hinder your investigation? Who’s your ally, and who’s your enemy? An array of interesting tasks and dialogues await you in the forgotten village.

What you can expect:
• Interactions with authentic and idiosyncratic NPCs
• Atmospheric settings in remote settlements.
• Exciting puzzles involving exploration and NPC interactions.
• In the forests, you’ll find a hermit and a witch. Who’s the ally and who’s the enemy?
• Open world ready to be explored.
• Eerie encounters and mysteries.

This puzzle adventure is perfect for playing while traveling. No internet connection required for this offline adventure game.

The Wild Case is a point and click adventure game from the creators of Stormhill Mystery: Family Shadows, Angelo and Deemon: One Hell of a Quest, The Last Dream, Haunted Hotel: Charles Dexter Ward, Inbetween Land, Tap the Blocks and Sonya: The Great Adventure!

Boring…lame with very little you can do. One person gives you task, then the next, chain of obvious tasks to progress forward. Not one puzzle or mystery to figure out…slow interface and too much unnecessary and boring dialogue…deleted quickly.

The game was okay to start, but I ran into a really quirky thing with the pike on the wall in the first ten minutes. I couldn’t get it off the wall. It just kept saying something about not wanting to carry it around. I spent the better part of several hours trying to figure it out and kept going back to try it when suddenly one time it just lifted right off the wall. I don't know how or why. If there was something giving me the slightest idea why it wouldn't come off the wall, but then finally did, that would be one thing. Maybe it was temporarily bugged? Who knows? But by that time I decided I wasn't enjoying the game at all.

Beautiful graphics. Difficult but not impossible. Looking forward to more from the developer. Long live the Ukraine!

I absolutely loved this game! The challenges, the puzzles, the characters and the dialogue. Such perfection! I hope there’s going to be a part two. I would love to solve more crimes in this town or other places!!! 5/5 !!

Thank you for the game! I really enjoyed walking through it.

The beginning really draws you in and the game itself is definetly fun. Once I finished the first chapter I decided to buy the rest of the game only to find out the rest of the game is only 2 more hours of game play! I wasn't expecting anything crazy for a cheaper game, but it should definetly take longer than a few hours to complete. I really enjoyed the game but it was SO dissapointing to realize just how quickly you'll reach the end after paying for the game. Not worth it!

If I wanted to read I’d read a book, wouldn’t be so bad if you could just keep playing through the story but you can’t even click out of the game. There is definitely a lot wrong with this game, needs lots of work. This is like amateur games

Nice looking game but a little too simple. Finished in under 2 hours. Story is a little weak. There’s a lot of room for improvement but in its current state this game isn’t worth the $5 price tag. For $5 I would expect voices to the characters, extended gameplay with mini puzzles, and item combining. This game has none of that. -1 star for lack of value.

I released the animals at the end. The dude was arrested. But now it’s telling me I need to fix the bridge even though the case was solved. I have a key in my inventory. A hint button would be nice. Even though it was solved I don’t feel it to be complete until I fix the bridge. Got my ocd going crazy. Someone help!!

I liked this game — gorgeous hand-drawn scenes of early 20th century rural Russia, with simple but interesting puzzles. However, the English dialogue and descriptions sounded strange sometimes, and that was often a distraction for me. In a future update, the developer should really consider having the game’s text revised by someone who speaks English natively. Sometimes I could pick up puzzle items before I knew I would need them. It felt a little artificial. I was also disappointed that I could not interact with the game’s scenery more. I really wanted to know what a propaganda poster said, for instance, or what the chickens would do if I tapped on them. These questions remain mysteries to me. I look forward to seeing what other games this developer might make.

I loved the game but I didn’t want to buy the full version so sadly I’m deleting it.

As a veteran of these types of games, having items and areas unclickable until another task is completed makes it difficult to understand what and where you’ve been or what is important in the game. For instance, you have the fuse box unclickable until you locate a fuse. Just make it open so that we know it’s relevant. Also you have the Jeep unclickable until you find the wires. Just keep that stuff explorable and the user will know to go back and look later. If I click the Jeep and nothing happens, I am unlikely to go and explore it again. This fundamental problem is all over the game and is frustrating having to go back and explore areas several times only to find out later that I had to trigger something to make that area explorable.

Objects that need to be used do not really make sense. Who thinks of combining a tie and a belt (from a suitcase that needs the key in exactly the right spot to open) to pull up a door handle? Not me. Overall nice graphics, but too dark. Inventory should be in view at all times. Becomes a problem when I have to tap inventory, then tap for object, drag it down to use, and precisely place it where it belongs. If I misplace the object, I have to start tapping again for the inventory. Dialogue is slow and offer no clues. Game could be easily improved, but seems developer moved on.

I can't get past the first scene. Yes, I'd like to tug on the belt but can't figure out how to do that. Pointlessly tapping, swiping and clicking does nothing.

I saw the numerous positive ratings for this game so I was excited to play. The game itself looks nice but I was not very impressed with the story or gameplay. The controls can be very awkward. When you’re on a screen tapping to find items, if you click anywhere on the lower half, you will move back to the previous screen. Most point and click adventures have an actual back button so it was hard to get used to and I found myself always clicking back to the previous screen. Also, the lack of puzzles was disappointing. The only puzzles where trying to talk to the right person to help you complete your objective. The game wasn’t bad but was not memorable or it doesn’t have any replay ability.

This is a well made and fun game. I won’t say it isn’t worth the money but it is VERY short compared to some other mystery and tap-to-solve type games. Would be 5 stars if it had about double the content and play time.

The “puzzles” in this game boil down to “hey, why don’t you go talk to this other person”. The navigation is extremely awkward; the click points have to be swiped over to see and I often end up moving to new locations rather than inspecting a potential point of interest. The loading time between scenes at least a second so this gets frustrating quickly. I get that this is a phone interface issue but if you know that’ll be a handicap, then why even bother making a game that will be a pale frustrating imitation of what one can do on a computer. There are so many point and click games for pc and they don’t tend to need a good pc; any laptop will run them and they’re all (even ones from thr 1990s) better than this. Even if this were good, I don’t see why one would spend much time playing a point and click game not optimized for a phone screen. I played through the free chapter but I was not impressed enough to purchase the rest.

Wild Case is a very enjoyable click-and-point. It could have been a little longer and the ending felt a little abrupt, but that could just be me. I felt that it was easy enough to make it through without looking up hints, while still being challenging enough to keep it interesting. There were a few parts where I wish there had been a Hint button, but other than that I had a great time playing! Great throwback to my favorite early click and points!

If you’re a fan of and used to playing point and click adventures like this, it’s enjoyable but very straight forward on what you need to do to advance, and thus rather short. After I unlocked the full version, I got an hour or hour and a half of gameplay probably before finishing it. If you’re one of those people who complains about that when you paid a whopping $2.99 or $3.99 to an independent developer, I’m warning you now. But if you enjoy these kinds of games and don’t need to get “stuck” to enjoy it, then I say go for it.

Interesting point and click games. As other than F2P games thee have not been many new games that are true to the category. Would have given 5 stars but lack of hint button makes it a bit tedious.