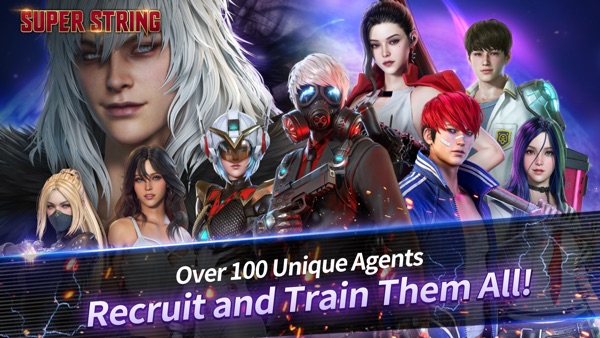 Recruit and train a variety of unique Agents
and lead them to battle in Super String, an RPG that maximizes the fun of collecting and strategizing.

■ Recruit and Train Them All!
– Recruit and train over 100 unique Agents
and build up your ultimate team!
[Agents] Over 100 Webtoon Heroes come to life in Full 3D
[Types] Craft your own custom deck based on the different Types (Offense, Defense, Specialist, Support)
[Progression] Upgrade your Agents’ Levels, Star-Levels, Skills, and more
[Equipment] Maximize the impact of strategic Skills through Gear/Core Equipment

■ Become the Commander and Lead Your Heroes to Victory!
– From the engaging [Campaign] Mode
to [R.A.I.D], [Abyss], and Real-Time [PVP] Modes!
Take command of your heroes and unleash their powers through the various game modes!

I’ve played nearly every Gacha style game out there. I love RPG style play. This one gets more elements right than nearly every other. Character collection? You can do that. Costume collection? Yep. Enough in game currency to make your own decisions? Sure thing. Unique character skills and development? In spades. Make practically any tier character top tier just because? Go for it. Challenging levels? Varied modes of play? Strategic PVP? Valuable participation rewards? All of it. This isn’t one of those games where higher difficulties only require stronger characters - they require thought too. Reasonable energy wall? Low pay wall? They’re more like small hills - not mountains only P2Ws get to scale. That said, I’ll probably end up supporting because the game is just so well designed. I’ve been playing for a couple weeks now, and am still uncovering new elements. If you enjoy RPGs, give this one a go. Hat tip to the developers - you made a strong game here.

I don’t write many reviews but from the plethora of gacha games out there Super String is pretty solid. It’s extremely F2P friendly, you’ll eventually be able to collect all the characters. In the three weeks I’ve been playing I’m about 10 away from getting all the characters. The only thing stopping me from giving it a 5/5 is that gold coins (non-premium currency) is harder to obtain. It’s true that you’re given at least $1.5M coins per day but it’s hardly enough to upgrade things like gear. Other than that, I’m pretty satisfied with the game.

Best game I’ve played in a while love the characters and the gameplay. Doing a great job love to see what new characters you give us keep it up guys and thanks.

Great gacha game that I just so happened to find. I’ve been playing for about a month, and I love the progression ability. Free gear removal is the absolute best, and for those of us that buy packs, they are also reasonably priced. I just posted my first YouTube video of a small pvp match, however I plan on delivering MUCH MORE content on this game, because it’s really good. Check out my channel for more, as I plan on uploading daily content primarily for early and mid game players. @TheG0dinfinity.

The game itself is already amazing and very f2p friendly I like it so much but the graphics if it can increase the the resolution for max settings that would be much better,overall everything and gameplay is just amazing.Keep it up developers and listen to community wants we all hope your game blew up

Big fan of the actual strategy in the game and not locked to ssr units.Visually appealing and good character design.I love manhwa and they do a great job with the series they have presently my main gripe is simply they don’t have more Manhwa right now it feels to focused rather that a big collection of manhwa.

Needs advertising on global. No interaction with players. Dead reddit, almost no youtube or Facebook content. Need to send 10 friend points for daily quest and i don’t even have 10 friends in a week cause the in-game friend search don’t show online players but those that stop playing the game 3,6,20ect days ago. One chapter is too long to complete on-top of that every skill has a long animation that cannot be skipped. Like everyone here says progress will suddenly stop at a certain point and you will just get bored with so little new players to challenge you.

Great mechanics - graphics-sounds - animation-effects this art and good stories- only problem is the size of games.

This game’s art design is absolutely stunning! The UI is also designed very well, BUT there’s is one major problem that is really bugging me…the game’s “flow”. This game’s gameplay needs to be streamlined ASAP, the game is fun but 1/3 of the time is “waiting”, waiting for loading screens and waiting for the attack animations. My suggestions are to add an option for us to skip cinematic animations and just have a simplified version of the attacks when at x2 speed. Also, if everything has to be sent to our inbox when collecting, please adds button for claim all items in inbox. Thank you!

Pro: Over the top specials and ultimates Zany character Amazing style and graphics Con: Your going to be spending 1-2 hours before you get your first 10 summoning tickets They throw a lot of info and mechanic pretty fast I still don’t understand half of the mechanics All I want to do is battle and watch all the awesome animations but I’m stuck playing tactical in between fights managing teams which just waste time This game is not causal at all it requires way to much time. I don’t got time for that on a mobile game

Garbage game on rails the pulls are scripted and the rates are a joke. Same 2 SS heroes over and over in the “generous” 30x 10 pull give me a break.

I’m stuck on the raid 5 quest. Before getting stuck the game moves nicely. Quest rewards make up for the notable LACK of ways to farm gold and exp potions efficiently. Once they were gone the game got boring fast. 3 days without progress is taking a toll I’m afraid by next week I’ll stop logging on to check.

So this plot seems to be a string of different WEBTOONs put together I noticed this from the beginning when the 2 kids reminded me a lot of the 2 main characters of the WEBTOON distant sky I mean even there names are the same Hanuel kang and heyool shin.

I feel like I am having a stroke every time I read the text. That’s not a good thing at all.

The Game would get a 5 but lose a point for using old sounds from other games. Also the servers are merged so plenty ahead and different advantages. The game does have game artwork and a interesting storyline with the characters had better story animations thou.

They throw you into the existing Korean server, with max lvl 70 players. No separate server for new players - avoid.