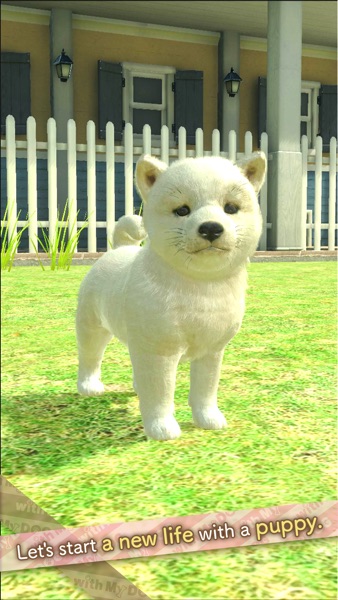 Attention: cat lovers and animal lovers,
Spend more time with your kittens and get to know them.
Various kinds and personalities. Let’s start a new life with unique kittens.

▼Meet new cats at Friends Plaza ▼
Find the cat of destiny.
Spend your time with the special one? or try to see how many cats you can meet?
Utilize Friends Hotel and Foster Parents as well.

▼Keep a cat on your smartphone ▼
Interact with your kitten anytime, anywhere.
Your kittens will recognize your voice.
The outside sceneries will change according to the time you actually spend.
Take AR photos/videos of your cats in your room or outside, and post them on SNS with #withmycat

▼Your own family ▼
Costumes, hats, glasses and more. Unique items over 600 kinds.
Give your kitten a stencil mark to make them special.
Cat’s room interior-decoration can also be customized.

Free-to-play, a cat simulation game. Let’s start a new life with your kitty.

Hi, so i wish all the dogs u adopt can play together, and breed!! That’s all! Thank u so much for reading! -khloe

Just bought the upgrade and accidentally deleted the app. When I try to restore my purchase, it closes the app and goes back to the original set up mode. It’s a vicious circle.

This is a great came for all you dog lovers! There are only a couple breeds though I wish you guys would add more plz. Also you can only buy a couple things in shop for in game money, but if you want tattoos for your dog you need to buy more with real money which I think is wrong. I think you guys should come out with actual wings for the wing accessory. Instead of just floats and stuff. Over all I think this is a great game and I like to play it in my free time. I have fallen in love with my dogs and I hope whoever downloads this, does too! Cya later! Love Lazy_Pitbull🥺🌸🐶

This game is the closest thing to Nintendogs and I loveeee it! Nintendogs has such a special place in my heart and I’ve been trying to find a game similar to it for so many years. There are other apps that emulated the same style but were never what I wanted. This kinda copies the same exact game mechanics as the DS game but there are also improvements as well! I’m giving it four stars because I think this game can really grow and surpass the quality of Nintendogs. I have a few suggestions: -Have the data saved on a cloud so someone can play interchangeably from an iPad and iPhone. -Implement different inputs for throwing the frisbee to change the distance, height, and direction, or even the curve of of the throw. -Expand the range of the camera to something close to 360 rotation. It feels kind of cramped and restricting to only move the camera horizontally. -This might just be me doing it wrong but it’s a workout trying to pet your dog in the right spot to get hearts/bring the happiness and hygiene levels up. To me it feels like a chore especially since I pet pretty fast for it to work. -I probably haven’t figured it out yet but belly rubs please! Like the dog is completely on its back its belly is facing the ceiling. -Multiple dogs in the same room. -Maybe a few more cute popup texts like the ones after you feed your dog. Like after grooming, “ Your friend is squeaky clean,” or after winning competitions in the screen with the trophy, “Your friend won 1st place! Their catching skills have improved alot. Maybe it’s time to try the next competition division.” -Dog Pageant shows. -Competitions based on the tricks they’ve learned. -Maybe for grooming you can change the room to the bathroom. Obviously, I see alot of potential in this game. But I have never made any games before, so I’m pretty sure a bunch of what I’ve recommend would not be possible for the phone to process without dropping fps or significantly increasing the loading times. I’m sure there’s also copyright issues involved so certain suggestions would be legally impossible. Either way, I am going to be playing this game for a while!

I love this game it is amazing but I would like to see more breeds added to the game! Such as American Staffordshire terrier, hound dog, mastiff breeds.

I really like this, though there is very long loading times, and a ton of the game is paid. But besides that, pretty cool game!

The app does not open no matter what I try

I was looking for something similar to the Nintendogs game I used to play on my DSLite. This game has great graphics, ability to walk, pet, groom, feed, dress, train and compete with your dog. There’s voice training options as well, and while the connect with friends and Live features aren’t something I see myself using since I just play for my own leisure, it’s excellent if you want to go to another level of interaction. My only frustration is that walks are not very easily controllable. Otherwise I enjoy this app.

So, yeah, great game. But I think it could use some stuff! So firstly I think you should add more breeds, every one of them you can think of! Please do this one, I’m begging you! Add more rooms! I think you should add more rooms! I can’t live with only three rooms (plus the hotel rooms) Add stray dogs on the walk! It could be like, if you encounter stray dogs, you can choose to keep them or not! Yeah, other than that, nope. I don’t have anything else. Great game, by the way! But, well, please, please, please add my suggestions! You know it would only make the game better! That’s what you want, right? Anyway, great game, just could be better. Plus, I just made a ten minute long review and most take like, 3.

When I loaded into the game it took so long and the dog I chose was so stubborn I couldn’t pick another one when I went back so I had to restart the petting all over and before when I was petting it the first time it took longer then five whole minutes I couldn’t even get to the part where you like walk the dog. That’s why I think it’s terrible.

I mean so ok I really LOVED IT at the beginning but then my screen just froze and it wasn’t working for an hour or so I went and got a different dog game and it was so much better. Don’t get this game

While this game has beautiful graphics, I had my heart set on a Siberian Husky and am genuinely surprised that it only has six breeds with the unlock feature...

I used to play this game or one similar to it years ago and I found it again and wanted to se show much it’s grown but to my disappointment I can’t even play as it won’t allow me to choose what dog I want and if I refresh it just puts it on a new dog that I couldn’t have before ;(

I’ve been wanting an app similar to NintenDogs for a LONGGG time and this one is the only thing similar so far. I haven’t made any in-app purchases yet just because I’m waiting to see more updates, but so far this game is pretty good. Like someone else said in their review, you can do pretty much everything that NintenDogs had. I haven’t unlocked certain levels yet tho, so I’m not sure how good some of the options are. So far the feeding process and playing with toys n stuff is similar. There are customization features for the house, but like I said, I haven’t unlocked everything yet. Some clothing is offered and you’re able to buy it with money you earn through the game. The dog you start off with is a chihuahua. A LOT of the game is accessible by paying w real money, which I don’t like much (obviously). Waiting for more updates to see how this goes. Hopefully better graphics are coming too haha

I don’t like it had to give my dogs away 😭

This is a ripoff of a switch game called Little Friends (For me, it’s dogs and cats but it might be just dogs.) For proof, if you have a switch search it up on the game store. And no. It isn’t Nitendogs. I also found out that there is a cat version of the ripoff. With my CAT. It’s also like little friends but it’s only cats.

I love the game the dog are so realistic the game is so fun love it and love the music too.and you get new dog in the plaza like every minute. But the thing that I kinda don’t like about it is. 1.when you go in the plaza you don’t get to meet other people’s dogs you just have to meet yours. That’s basically it. I love the game. soooooo cute you need to get it. This is probably they best game for my opinion.and when your dog howls it’s literally the cutest thing ever.you need to get it. also for a game this good you don’t even have to pay for it.👌👏👏👏👏👏👏👍❤️❤️❤️😁😁🐶🐶🐶🐕🦮🐕🐕

Ahh! Thanks for making this game. The animation is realistic, if a bit glitchy here and there. It’s easy enough to navigate, and I’ve already grown attached to my little pup less than an hour later. Good job, devs!

The game when set on high settings runs decently. But sound needs help (didn’t even hear my dog when it barked). You can do pretty much the exact same things as Nintendogs, however the UI is NOT user friendly and takes a few seconds to start any activity on top of having to navigate too many mini menus. But for its debut, it’s looking good. Keep at it, Developers!