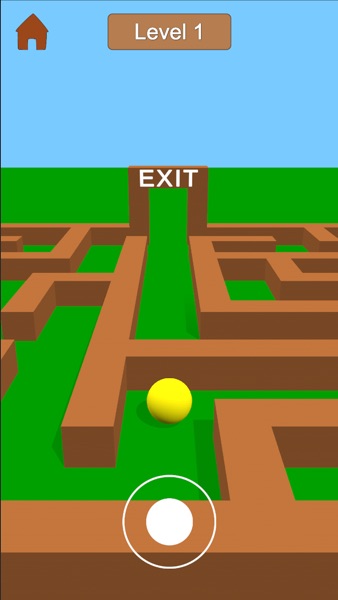 Maze Game 3D is an interesting logic game that will help you pass the time. You will play with a yellow ball that needs to be rolled out of the maze. The mazes are easy at first, but as you progress the mazes will become more difficult.

It’s terrible. 1: the makers of the game could’ve at least made it so you could change your ball avatar. 2:the rounds are about EXACTLY THE SAME! (And don’t get harder.) 3: AND THE ADDS! Oh my gosh! There after the (very short) rounds, and before them. Constant. 4:they could at least add something like a background to the game. It being 3D isn’t that cool when all you do is just roll. Can change nothing. Nothing will change. Kind of depressing. So all I have to say is the concept is really cool. Game could be a lot better though. Sorry if this sounds rude! Ty for reading!

Awesome idea, but seriously when I open it it stops the music I’m listening to and can’t play it when the app is running??

Awesome game but it gets boring after awhile 😃👍👌

To many adds other than that the game is good

This game is as Pac-Man Pac-Man so cool as so cool!!!

I get that it’s a free game. BUT THIS IS AN EXCESSIVE AMOUNT OF ADS! Two between each level. You’re going to spend 30% of your time playing and 60% of your time watching ads. I would have given it a higher star rating if it wasn’t for the amount of ads. The bright side is you can get rid of the ads by purchasing the ad free version for $5. This is the only reason I gave this game 2 stars. Not all free games give you an ad-free version, or they offer an ad free version with a $10/monthly subscription (or something ridiculous monthly/weekly fee).

Doesn’t let you go back to play previous levels. The Main buttton and the next level both bring you to next level.

It is ok but it needs some more features

There is a way you can stop the ads. Turn on airplane mode and then turn off wi-Fi.

1.It is boring because all u do is just walk through a maze like and some fun in it🤗😎 2. It is fun because of how big it is and interesting 🧐 way to get out of a maze Three. To many ads that why three because two complaints😝🤨😡

I give it two stars because just like toooooo many adds