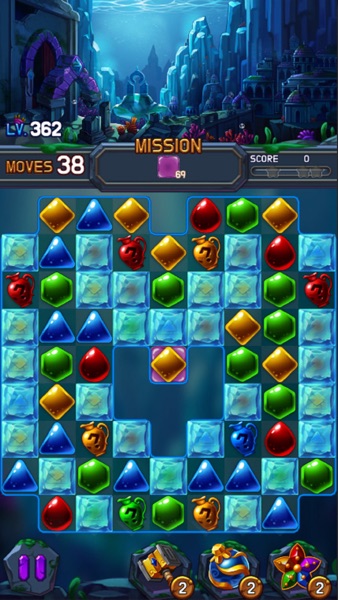 – What mysterious things will happen to deep underwater cities?
– Invite us now to the world of high-quality puzzle games with a variety of missions and colorful graphics.

Move the jewelry and set it in the same shape.
Find treasure while clearing missions hidden in Undersea cities!
Experience 500 different stages!

[Game Features]
numerous levels
– We have 500 stages with continuous updates.

Play games without entrance restrictions, but you don’t need data!
– There’s no limit to games like life hearts, so you can play as much as you want!
– Play Offline Without Data (Internet) Connections!
– Don’t worry about Wi-Fi!

flashy graphics and simple manipulation
– It’s an easy game to play if you can match 3 gems of the same color.
It’s easy to learn, but not easy to master!

[Precision]
1. If in-game does not save, the data will be initialized when the application is deleted.
The data is also initialized when the device is replaced.
2. It’s a free app, but it includes in-game currency, items, and paid products such as removing advertisements.
3. Front, banner, and visual advertising.

I enjoy playing all of your games. However, Jewel water world level 2155 cannot be won as there is a space that never loads another jewel on the left side. Without the jewel, the ‘door’ underneath cannot be removed. Please fix it. thank you

Just finished level 109 and it was so much fun immediately wrote this 5 star review. I did pay the small fee to remove ads early on. There are a lot of things I like about this game. You can make four jewels into the shape of a square and clear exactly the tile you need. There are plenty of moves available on each level so you’re not trapped or stuck easily. The underwater scene at the top is fun to watch. Sound effects and visual effects are good.

I can’t get the game to load. This is a waste of time

First let me say i like this game. The developers have several different Jewel games and I like how the games are quite similar but with just enough of a difference to make them just as enjoyable. The lack of 5 stars is only because the game has pauses while playing... Some several seconds and some just freezes where I have to shut the game down and go back in. It's annoying, even more so than the ads.... which I know are a part of the game being free. REVISION: Okay.... I initially gave this 4 stars..... It's down to 2....NOTE TO DEVELOPERS.... I LIKE THIS GAME.... BUT..... Not only have the freezes continued.... the ads have gotten so much worse! More often than likely I have to hit the X button at least 20 times to get out of the ad and this after I watched the ad for 30 seconds. It just keeps going to app site each time I click on exit. Come on guys.... You're supposed to be geniuses.... What the heck? ?? You got a good concept here.... Fix these bugs.

Talk about an overloading mind numbing app, I love the game but the ads are ridiculous. Seriously, what’s up with not being able to X out of an ad? I’m deleting the app, maybe the developers will actually read the crappy reviews & do something to stop with the overwhelming amount of ads.... GOOD LUCK!!!

I really hope the developers see this. I get it, ads make you money. I really like this game less than 20 levels in. Good, fast game play. The graphics are good. I’ve been looking for a new match 3 for awhile and I thought I had found it! However, stop with ads! Please! Once I got to level 10 an auto ad played. No way to opt out. By the way, there is already an ad banner at the top of the game and another ad when clicking on a new level. They also want you to watch one to earn extra moves. I actually would play this game a lot if there was an option to buy yourself out of ads permanently, say for 99 cents, maybe even 1.99. But yet again, I will have to delete and keep searching.

This game would be good game but the ads are twice as long as each level. Why have an ad after every level.

It was fun until it wasn’t. It keeps freezing and glitching.

After paying for the app things fell apart. Power-ups stopped working after the ad, of coarse. Somehow I made it past level 701 that I’ve seen people having problems with. I’m up in the thousands. Please fix the bugs so I can play the game I paid for.

Too many ads; it really interrupts the game. Dana Damm

Enjoying however 701 will not play. I even paid to get rid of ads and waited 5 minutes as suggested, but the x did not appear and still can’t get 701 to open.

Feel like I am getting ripped off. Paid for ad free and all the ads were still showing up after they took the money. I also hit the Level 701, 3 levels after I paid for the ad free and now it is locked up and will not go any further. Wish companies were a little better and honest as to what you may pay for.

Same story as another review...got to level 701, and the game freezes... Have really enjoyed it up to this point. Hope the glitch will be fixed. I’ll keep it on my tablet for now...

This is a beautiful game with vibrant colors and interesting characters. It’s very addictive. I appreciate that the levels are not too difficult so it’s not necessary to play them repeatedly in order to advance. I recommend opting out of the ads for the small fee.

Great game until 701. Contacted help n they said update it. No update available. Uninstalled and re-installed. Started completely over and still can’t play 701. So sad because I really enjoy this game.

I had to delete this game because it kept crashing on my iPhone and when I downloaded it again it seems like that there is more ads and a LOT longer Ads. This takes all the fun out of this game. You spend more time watching ads than playing the game. And you can’t X out of it until it’s completely done😡 not happy with game now

I have been playing this game for a few days and am now up into 200 levels. This game power ups and obstacles are like none I’ve ever played. I dislike being annoyed by game advertisements; so, I have paid $1.99 to remove them. This game is smooth and colorful. I recommend you give it a try.

I will not open. It just flashes and i get nothing!