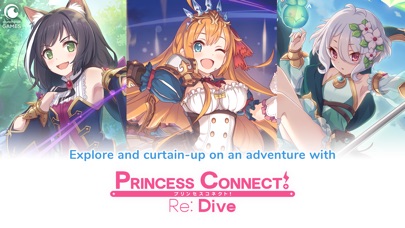 A tale that resonates: the tremendously popular RPG, Princess Connect, is here for a global audience.

Princess Connect! Re: Dive is finally available worldwide! A blockbuster title that enveloped Japan and China with its success, the game arrives upon new shores thanks to an exciting collaboration between Crunchyroll Games, Cygames, and GREE Entertainment.

Begin your journey across the land of Astraea with Heroines!

◆ Deepen Your Bond With Your Heroines ◆
Ascend and strengthen the characters by leveling up and equipping epic weapons!
Cultivate your bond with each Heroine and unlock special story content!

TERMS OF SERVICE:
Please read this Terms of Service Agreement and our Privacy Notice before using our services as they govern the relationship between you and Crunchyroll.

I love this game can’t stop playing it been over a year now and this game is just that god. Best gacha game. I’ve tried kicking for another one that’s as fun or similar or even different and nothing comes close to this game.

Honestly I love the game and all, but I just hate how the draw rates for a 3 star character is so low. Like make the cost for the gacha be 1,000 jewels for 10 draws and 100 jewels for 1 draw, it makes it a lot better to actually draw more instead of wasting 1,500 jewels for 10 because with 1,500 it seems like you just wasted two draws worth of it. Also don’t make the draw rates be below 1%, have be at a higher rating.

Can’t actually open the game. As soon as I do, it immediately opens my email app with error codes. Ironically enough, can’t even send the email because the domain name in the email is something like “@xxxxxxxx” Error code 32. Also thinks I’m on an iPhone 13, when it’s actually a 12.

There is something about the game design and execution of priconne that makes the experience of playing any other gatcha game feel lacking. The game is relatively fast to play. Relevant dailies in the game for the day can be completed in less than 8 minutes. This can be mostly be attributed to the very generous amount of skip tickets, which are not a given in most gatchas. Other QOL updates in the future will drastically lower the time spent doing dailies. This is the most important feature of the game. It respects your time. The gameplay itself is pretty straightforward yet there is quite a decent amount of depth within it. Mostly seen in its pvp and endgame pve content. Interfaces are smooth and responsive as well. Priconne is a generous game, and while you can definitely definitely get by without spending a cent. I love the fun fantasy setting, the characters, that I don’t feel bad spending the 8$ monthly pack. It’s a game i’ll play until EoS.

This is a great game, truly. it is a high quality gacha with great characters, and a story that has a lot of heart. it starts slow but as time goes on it becomes more satisfying and rewarding, regardless of how much money you put into it. this is a game you can pick up for 5-10 minutes a day once you get situated with the aspects and different mechanics this game has to offer. its like a bonsai tree where growth is slow, but with care it blossoms into something great.

So I have been playing this game since day one and I am glad that I have been playing this game for so long. The game is fun and the story is amazing! I am mostly free to play but I did spend some money on this game but it is totally unnecessary because of all the quests and free gems the game gives you. It also helps that I’m in a really good clan but even then I used to be in a lower tier clan and still never had a complaint! The competitive scene could be better but other than that, I have no complaints and enjoy every minute of this game! I hope to enjoy many more years in the game and hope to find a game that can compete on this level.

As the title says: - The art is great - The voice acting is great - The addition of cutscenes is cool - Gameplay is enjoyable However: - Summons are limited due to quality characters —— Because of this, you’re very prone to having many… many… many… duplicates… To elaborate, you need 1500 free/paid gems to x10 summon (150 for x1). I have 10 characters left to acquire which are 3 stars… so I bit the bullet and paid for 7500 gems (which is more money than I should ever spend on something like this). This granted me a total of x50 summons, and Not. A. Single. three star character dropped. I wouldn’t of even been too mad if it was a duplicate. There is a pity system, however; one duplicate grants you one pity point to acquire a character. But you need 300, and it resets you to 0 after an allotted time. As nice of a game this is, the obvious money grab is the biggest deterrent. I’ll probably be deleting soon once I’m fed up with it. I’d advise not being like me and using your money for something else more important.

So I’ve only been playing pretty much F2P. The only time I spent any money was for daily Jewels and Skip tickets for a whole month. 50 jewels and a certain amount of tickets will be available and It’s 1500 for a 10x Draw. So it helps but you don’t need to spend money at all to enjoy this game. It’s very generous with the resources you need to progress. I’ve only been playing since the end of Valentine’s Day, I am (at the time of this review) a level 51 and have 23,000 Jewels. Like I said it’s very generous from my experience. This also isn’t a game where you need to worry about “Meta” over Characters you like. Waifu > meta and that’s a fact.

It’s really fun to do while you’re playing the game the dungeons are a little hard but you can pull through it. It’s really fun to get new characters and at the beginning of the game you start with a three star but the rest of the girls are on STARZ but it makes it a lot easier to go through the levels. It’s a great game for nine-year-old and any kid under seven I would say they wouldn’t be able to play it. It’s a game where you have to level up your players so it would be harder for a little or kids to play. Overall the game is just really good. A like how do you three as you do have to watch episodes and it is all in Japanese so you have to read. But I give this game a five star review it really does take its title!

The anime and background and setting of the the game is so cute and cool and the characters are cute and the story of the game is funny and and cute. The event bosses and regular bosses are so cute at least that’s what I think and the course of the story and event stories are great. The races of people are so cool I want to be part of the elven beast or demon tribe if I could. But there’s one thing that’s bothering me though sometimes when I try to use skip tickets it glitches and stops for a few minutes but I’m fine with that glitch anyway this game has cute anime cute characters a great setting and a great story.

I only downloaded this for the free summons event for the 1 year Anniversary… WHERE IS IT?

been playing the game for a few months now. it’s pretty fun but i feel like i hit walls sometimes but i just had to do a good amount of grinding to progress

Clicking repeat stage is so tedious, and I hate running out of skip tickets. Please add auto repeat or remove skip tickets and just let us skip unlimited times based on stamina.

I have every character. I've been playing every single day since it was released. People who complain about drop rates are not hardcore players. It's sooooo easy to pull characters and the pity system is great. My only complaint is the gear drop rates. They aren't as generous and the stamina system is a bit harder to maintain in the end game. Other than that the story is fine, good characters, fun to pass the time with. Thanks

Everything is good but wow the gacha is so whack compared to any other gacha game I’ve played. 200 pulls and not a single 3 star limited character like bruh the limited character has a higher chance of dropping but still nothing.❌