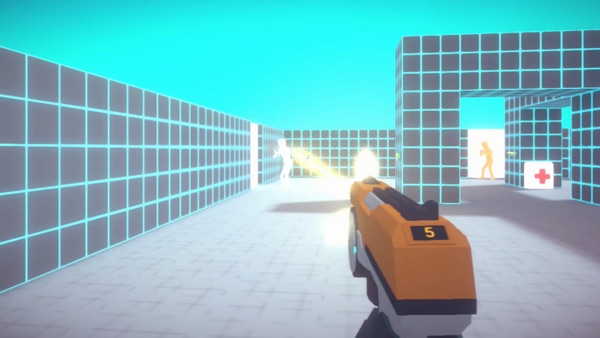 321 Shootout is a fast paced, action, arena first person shooter (FPS).
– Fight off hordes of intelligent enemies.
– Wield an arsenal of powerful weapons.
– Battle through a wide variety of locations, from an eerie space station to the surface of a distant world.

Let me get real with you. I created 321 Shootout because I wanted to make the fastest, most intense FPS on mobile devices, and everything in the game is built to serve that purpose.

Don’t be fooled. This game is not easy, especially if you’re new to shooters. You’re probably going to die… a lot. But, if you stick with it and sharpen your skills you may find that a visceral first person shooter experience awaits you.

So what are you waiting for?
If you’ve ever been a fan of fast paced first person shooters, then THIS is the game for you.
Let the guns blaze.
Let the bullets fly
3
2
1
Shootout.

I love that this game supports controllers! The fun and simple gameplay, plus the controller support, is the main draw of it for me. However, I play it on a 2020 iPad Pro, and the resolution compared to most other games I play is super low. The simple nature of the graphics should allow the developer to increase resolution substantially on newer devices like mine. I also think that pro motion support is clearly on the table. If COD Mobile can get 120 FPS, then getting it here shouldn’t be a big ask. If it had higher res graphics or 120 FPS, this would get 5 stars.

This game is a great offline first person shooter. I have an idea for the next update. The enemies get grandes right, and maybe a mech latter on. So maybe you could add a forearm mounter device that the player gets instantly or they pick it up like a gun or an explosive weapon would be nice. Other that a great game and keep up the good work.

I think you should try to add aiming, an up and down movement for the camera, and maybe some headshot or other type of feature. This game is a 10/10 tho 😂!

Pros: -Nice distinction between maps -Very good AI -Playable offline -Hype soundtrack -Works with controller -Fun -Great developer Cons: -No vertical aim -Bugs such as falling of map or not returning to the title screen after you die therefore not saving your progress -Not much customization for controls -No visible cue to show you have taken a hit Suggestions: -More guns -Gun attachments -Don’t really like the perk for next round thing. Maybe do a skill tree for that run or add perks for the run instead of just one for the next round. -More complex maps -Give visible cue for damage taken. I have had several instances were I didn’t even know I had taken any damage and then suddenly I was one shot. -Co-op mode -Storyline maybe? Or maybe instead of respawning in the next room you choose your perk then move on to the next area? -Character customization -Lots of minor but annoying bugs need to be fixed Great game! Please keep adding to it!

I wish that there was Gun customizations and more guns and ducking prone and peaking feature in the game but can’t complain for a good game.

This game is hella fun, it’s nice and challenging, and the enemy AI is surprising well done. The movement and attack patterns of the AIs are loads better than most other games of this type, which overall makes for an interesting and challenging game experience. The controls and sensitivity could use a bit of polish, but it’s overall a great game

It’s a solid shooter experience, and great for what it is- a challenging time waster. It just needs some polish. There are places where you can walk out of the map and places where you can get stuck in the geometry. The movement system is definitely one of the weaker aspects. It clashes awkwardly with the gunplay, which makes the game seem like it can’t decide between being a Doom like run and gun or a more tactical and slow shooter. The AI is beautifully annoying and offers a respectable opponent, but difficulty does need to be adjusted in the later levels. Too many enemies and too few guns. Overall, enjoyable for what it is. A few more maps or something like a Co-op mode wouldn’t hurt either.

I was a little iffy at first but it’s super fun once you get the hang of it, a couple bugs but nothing game breaking

Some of the reviews say that the controls are bad or the you progress too slow but I haven’t had a problem with the game so far. It’s actually pretty good and only has a few bugs but that’s a given with Mobile game. TLDR: Play it. It’s fun

You’ve done a great job, i love the “perk for next round”, i’ve seen it from many other roguelike games for example archero, but you brought it in to a fps shooting game, in my opinion it’s very creative. The gun shooting system is good but need some recoil and would be more crazy if you add screenshake or some effect when the character get hit cause it’s hard to notice☹️. The music is sick btw.

Haven’t tried it yet but I prefer to play games on controller. Any plans to add it in the future? Edit: great it has it thanks!

This app is a fun time waster and a good way to up your first person shooting skills. The only problem I can see is that the sensitivity that you start off with is kind of slow and delayed. You can fix that in the settings, though. All in all, pretty noice game.

Feels like a weird mix of the original Doom games mixed with Halo Firefight, which comes together for a mostly enjoyable experience. Two minor gripes though, you can't resize the buttons when customizing controls, and disabling aim acceleration renders the game pretty much unplayable as your crosshair moves at a snail's pace. (Not everyone likes aim acceleration) Besides that, pretty neat.