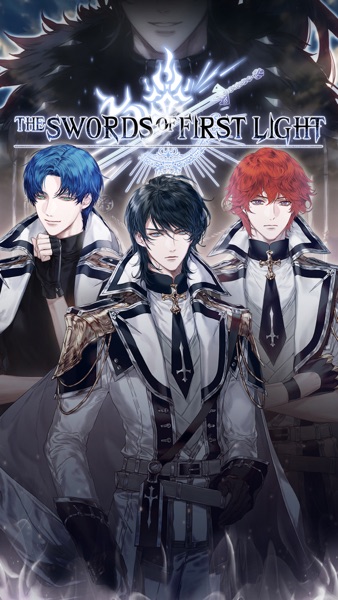 Discover your true love in this unique Romance Otome Game from Genius Inc!

■■Synopsis■■
You’ve spent your whole life helping your foster parents out at their inn. You’ve finally received word that you’ll be accepted into a special program in the Knight’s Order of First Light, known for their fighting prowess against demons. They even managed to seal Lucifer, the king of demons, away nearly 300 years ago! You work very hard to make yourself useful in the never-ending war against Lucifer’s creatures.

The daily training is grueling, but you enjoy your time with your fellow Knights. But after a series of weird events and explanations that don’t quite add up, you start to realize there may be something more sinister going on in the Order. To make matters worse, you find out your heritage is not what you had thought. You have no idea what game Alecto, an evil organization, is playing as they move behind the scenes. And of course your relationships with your fellow Knights are a roller-coaster ride. Who will you choose? As you realize the issues in the Order are much deeper than you ever imagined, can you find your own path to justice?

・Cyd
“If it’s used for good, can it truly be called evil?”
Aloof and unapproachable, Cyd is a lone wolf in the Order. It’s not that he doesn’t like people, he just doesn’t quite understand them. His avoidance of social situations means that little is known about him. He rose up in the Order quickly and is currently the vice-captain of the Second Division. You find yourself interested in learning more about him and he feels familiar somehow…can you figure out his secrets?

・Kaelan
“The strong survive and the weak will die. This is just the way the world works.”
Almost over-confident, Kaelan can be abrasive. After you’re assigned as his partner, he’ll train you ruthlessly until you can at least defend yourself. Kaelan doesn’t believe a Knight’s life should be easy. He hates demons with every fiber of his being and hates the weak almost as much. You get the feeling he has a traumatic past, but he’s reluctant to open up about it. Will you help heal Kaelan’s heart?

・Gwyn
“Don’t believe in people too easily. Most will let you down.”
Behind Gwyn’s chivalrous and kind smile is a truly mysterious man who gives almost nothing away. As a member of the Special Forces, he’s very capable but seems to have a mischievous streak. Gwyn tries to look out for you, even if his methods are questionable. You start to realize that maybe he doesn’t trust people for a reason. Are you going to be able to help him have a little more faith in humanity?

・Dante
“If doing what’s right means I’m labeled a villain, then so be it. I’ll follow this path all the way to the end.”
Dante is the charismatic leader of the nefarious Alecto. He’ll try to win you over to his cause every chance he gets – and Alecto’s goals are insane. But as your paths cross again and again, you start to realize that even if he’s misguided, Dante’s righteousness and firm belief in justice is almost admirable. You’ll learn more and more about him as time goes on. Will he win you over in Season 2?

This is one of my Favorite series EVER!! I love the story line and all of the characters!! I really wish for this to continue though!! I hope you create more Series like this!! Sincerely, -Raiku

this has a good plot but it's kind of like episode. you're given two choices and one is locked behind a pay wall. and guess what? the one locked behind the pay wall is the only choice that lets you progress with them. it wouldn't be so bad if it didn't take your entire stock of F2P gems for one single choice.. and if you weren't forced to make a choice every minute. "expand your relationship with him (25 diamonds) or ignore him and get absolutely nowhere (free)."

I loved the entire thing but in season 2 why can’t i restart the last episode … please.. fix this.. ;-;

The game is really really good!! The plot and music is amazing, and the characters are very interesting in their own ways and are fun to learn more about. My main critique is that the cost of rubies for choices is honestly inconvenient. 25+ rubies for a single choice is absurd regardless if you’re free to play or you pay money. To pay $6 for 60 rubies which would only get you through 2 choices isn’t really..... fair? The mini game, which can be extremely frustrating, doesn’t really give proper rewards either. Yes, there’s an opportunity to watch ads to multiply what you get by 3, but what use is that if you get a reward of only 2 rubies? As stated before, the mini game in of it is aggravating because it relies purely on skill and timing and that can take a while if you don’t understand how to work it. I think it would be nice if more mini games were added AND if the price for choices and for rubies were lowered.

I like the story. I am a little upset how expensive the choices are. I do wish the options would impact the story more. Something else I dislike is that during the mini game, the app will sometimes freeze up and i’ll have to close it.

The storyline would be really amazing... IF every choice wasn’t 25+ gems. Super hard to get attached to characters and hard to enjoy the plot when you don’t have the money to spend. Most of the engagement lies in the gem choices so I ultimately decided to delete the game. I understand that there’s a profit needed, but i’m sure you’d have 5 stars and even get as popular as other otome games if you made each choice cost 10 to 15 gems, rather than the absurd 25+. Really disappointing since I did read a couple of choices and they were really good. Hope you guys can improve soon!

Fun story, gem prices are so annoying though.

This is the best otome game I’ve played in a long time. The music is hauntingly beautiful and gothic, the storyline tense and challenging, the MC very funny and cute, the whole world just mesmerizing and atmospheric etc - I could go on and on. The three men have amazing personalities and are very individual. I played Cyd’s route as I loved him from the beginning lol he was so protective and strong. In the next season you can get a route from Dante, which I know a lot of people have been waiting for. I was able to get through the story for free watching ads and playing the mini game so it’s not that hard. I could go on and on but the point you are missing out if you don’t play this game.

Hello, makers! Okay, so, I have played a good amount of otome games, and this one is by far the best one. Sure the gem thing is annoying, but ya gotta make money somehow. Anyhoo, back to the point. The characters have incredible personalities and have stunning details. I think I might be obsessed. Alright, so as you can see the title of this rating is; ‘You better make a movie.’ Well, you people or person should! Your games have inspired me over the limit and it seems a tad absurd that you haven’t wrote a book or made a movie. ...or have you? Well, you don’t really wanna make a movie, at least consider my offer. You guys have beyond the talent to make one! If you guys need some words of encouragement: Books and movies are most of the time for the authors. They don’t expect to become famous, and, probably don’t want to. But they mean a lot to the makers. It would mean a lot to me if you made a movie! Yikes, this message/ rating thingy is getting loooong. Sorry! I hope I didn’t waste your time :/ Please consider the movie thing :) -avacodogirl

i think the system is fair but the mini game is just annoying. it’s so hard to get points sometimes, along with the cut scene id wish that they cut it out. it’s a good game but i hope they add in more mini games that aren’t so aggravating.

To choose the good options you have to use a lot of gems which means you have to pay for it because the so-called “free exchange” is just a load of scams. I tried doing so many of them but they either tell you you lost no matter what or make it impossible to complete. Some were just downright viruses/scams. It really disappoints me because the game actually seemed interesting

Okay like I said on My Mystic Dragons, the gems need to stop! I understand you need money but please make the prices lower or take away the gems completely. EVERY option costs at least 20 gems! At least make every option cost 1-5 gems. Because where do I get that many gems for scenes with the boys? I just don’t think it’s that worth it. The gems are a big problem in the game. Why should I have to pay to enjoy the game? That is just terrible because I really enjoy the game and I don’t want to have to pay to have fun playing it.

Honestly, this was well made unlike some other otome games. You don’t have to pay to do stories! So I personally think it’s a really fun game. (:

I recently finished reading this app and I honestly loved it! Gwyn captured my heart the moment I saw him. Although the ending felt a bit rushed, the artwork made up for it.

The game was nice but the ending felt rushed..other than that it was good

SEASON TWO IS HERE!!! I love all of the characters and I love the story!! If you can’t have Dante as a live interest I’m giving up.

I really like the game! I hope that you make more of these action/fantasy kind. Some people said about season 2, if you go back on the cover you’ll get to season 2! And so, I really like this!!!

I loved this game but I wish Dante was a love option. I really only liked him throughout the game and REALLY wish he was a love choice.

Over all good game love it! Though I also wish Dante was a love choice.

I like the storyline and I’m fine with the tickets but eventually when you keep using the gemmed choices, it gets pricier. It’s kinda easy to get the gems but it takes a while or it’s based on your skill. I just wish the gem choices wouldn’t keep rising and at least stay a single number.