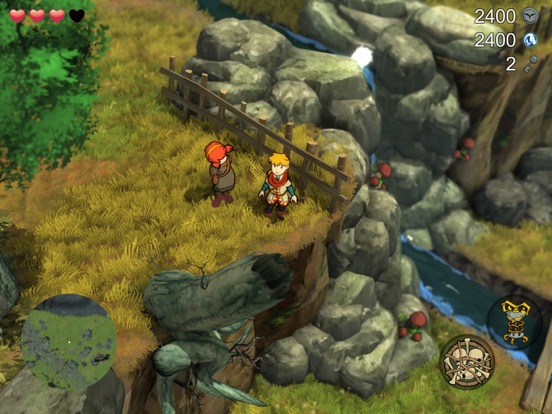 Journey through a magical land teeming with mysteries to unravel.
Baldo: the Guardian Owls is full of challenging puzzles to solve and intricate dungeons to explore.
Traverse this captivating open world as Baldo, and meet a host of quirky and unforgettable characters, as you struggle to decipher the cryptic prophecy, and thwart destiny.
From delightful whimsy to thrilling adventure, discover new towns and their distinctive inhabitants, fight ferocious foes, locate hidden temples, and collect objects both magical and mundane to obtain powerful new weapons, or to help unveil the myriad secrets of this strange land.

there have been too many negative reviews on this game from the start. most of them deal with the games difficulty, which is a challenge, not a flaw. unfortunately however, the updates to address these 'problems' have created and exposed legit issues with the game. number one being, MY GAME WAS DELETED, and only halfway thru the first adventure. i dont recall how many hours i had invested, but too many. way too many. maybe i dont care so much, as i stopped playing a few updates ago when the graphics were downgraded. no idea if this was intentional or not but i was waiting for it to be fixed so i could resume. this was months ago. inquiries to support have been unanswered. hopefully this time goes better, but theres no link ingame to reach threm and via apple arcade the support link directs to a poorly maintained webpage. it seems like this is the best means to reach anyone. again, hopefully. so heres the deal, i need my game progress restored. my game center achievements are still there but evrything else looks like a new install. i still really want the graphics bug to be fixed because i definitely stopped playing from there until each update just to check. checked this time and my game is gone. please help me out, i have had your back from the start. ill adjust my rating when this happens.

If you start this game on a $1200 iPhone Pro Max wearing $279 AirPods Pro and a Dualsense connected over Bluetooth with all the lastest updates you will soon learn very well what someone having explosive diarrhea directly into your ear canals sounds like. They will not stop evacuating their bowels so deep inside your skull, you will feel like you have been attacked by a face hugger from the Weyland-Utani corporation. If you manage to make it past the start screen the game still feels, and looks, like it was coded for Nintendo DS. It is an utter molestation of your good faith and valuable time. As a matter of fact if you look up the dictionary definition of “rape” there’s a picture of big ol Baldo, our handsome aryan hero. So I guess it’s on me for thinking this time would be different…… also this game “came out” like a year ago, and it’s Apple Arcade so. I guess I’ll check back in 2027? Maybe? No? Do you think you’ll have ever actually once played the game that you developed by 2028? Publishers? Tim? Kevin? Guys wya. Does 2029 sound doable? Hm? Nah we’ll probably all be dead by then. Oh well. Can’t wait for more “bug fixes”

RIGHT! After accomplishing all three, i move into the enchanted forest.. AND THE GAME SHUTS ME OUT! LOLOL Everytime i select the saved game “ enchanted forest” it does this, but when i select another saved one it lets me play it. MEGA frustrating. all that work and i cant enjoy the next parts that i spent mad time investing in getting to. I love this game. Please fix

Made it halfway through the game with typical bugs, no big deal. Auto save worked as designed. Then sword glitched out of hands and in menu screen. Out of fear of carrying said bug over, I chose not to save my progress at that time when I went to quit & reset the game. When I went to restart from save, 30+ hrs of game play instantly vanished. Not cool

Oh look a staircase hewed into the rock of that cliff… 3/4 to the top and I fall through the screen becoming Dark Balto, who then proceeds to drop into an unknown abyss of incalculable microns. Beyond Frustrating! Life is too short for bad games!!

The game seems fun, but because of the horrible controls, it's too tediuos. Trying to talk or use an item is frustrating because you have to be in the exact pixel for it to respond. Not even sure if a controller would help these situations. The puzzles are nice, but then again, you have options of push or use or talk and if you are not in the exact pixel, the cues are jumbled. I really wanted to play this be not playable as is.

I really enjoyed this game and can truly see the extensive amount of work out it into it, so thank you developers for that. I don’t like to complain… so I didn’t when I played through the entire Guardian Of Owls. When I saw an update with a new adventure, I thought: it was enjoyable BUT also maddening to play with the glitches but I’m sure they’ve got it handled by now. But still, no. I can’t complete the Three Fairies because as soon as I have all 3 of what’s needed and go to the enter the enchanted forest , the game shuts down. I’ve done everything on my end I can to be sure it wasn’t me or my phone. I even deleted my save and played the whole thing again all to get to the same. exact. issue. I can’t finish it because a huge giant bug that makes the new adventure legitimately unplayable is there. Releasing a game that has that huge of a bug… is a bit much for me. Don’t play Three Fairies until they fix it folks, or maybe, not at all.

Out of all my Apple Arcade games, this one is the one I play the most. I play it on my Apple TV only. The game is a little crazy but it is set up great, unlike any other game. I do own all the library books and still I get a little frustrated so I have to turn it off and think about what i’v done throughout the day, then played some more When I complete this game, I hope I can find other games very similar.

I mean I absolutely love the game n it has so so many objectives n courses that it’s almost impossible to get bored n the puzzle style situation… are awesome n love the effects but my one n only issue is it keeps kicking me off like when almost every time I use the horn to change worlds or whatever n bam I’m knocked off atleadt that’s how it began n this just has began a week or so ago n has quickly became worse more n more I mean I’m not loosing service just game knocks me off n many times it seems at the worst times like when I’ve spent a hour trying to kill something or beat a challenge & bam rt b4 I win boom ur kicked off n u have to redo all you just almost or even u saved a couple of times ur doing it all over again, joy!

I literally just got the horn and as soon as you equip it and play the song to teleport the game freezes and the only thing left playing is the background music. I was enjoying playing until this persistent issue would not let me further progress in the game.. Thus effectively ruling a would be awesome game as TRASH.

I absolutely fell in love with the game because it’s very legend of Zelda-esque. But unfortunately I ran into a few bugs that just blocks any chance of progression. Ramps have been rendered unusable. I try to go up a ramp or hill and Baldo just walks right through them as if they’re not even there. I died many times due to the prompt controls decide to be unresponsive, not allowing me to eat to heal, roll to dodge, or even pull out my sword. I want to love it again. Please fix these bugs…

It definitely still have a glitches

Attempted to play on Apple TV 4K. Was so buggy, laggy, and terrible looking that I stopped after the games 3rd or 4th mission task.

This game has esoteric puzzles, poor clues, and when you do figure it out (or Google it) you can’t pull it off because the controls are so clunky that you can’t seem to perfectly aim at the really tiny hit box. Life is too short for bad games. Uninstalled.

I have gone as far as I can in the The Underground. My game will not trigger The Ancient Lever quest. I am unable to push in lever into fish mouth- and in the other underground entrance in Rodia, the waterfall will not stop. I am completely stuck. I have watched tutorials and read walkthroughs. It is a glitch. The bombs quest is impossible; this makes me not able to proceed. I don’t know what to do. I really wish they would stop putting out games that they clearly didn’t play all the way through before releasing. Sooooooooooooooooooooooooooo many bugs and glitches.

How did this game get released? So many bugs and glitches!

I’ve been playing Baldo for months now. I do enjoy that you can complete tasks, for the most part, in whatever order you want. Patch 1 however broke a key resource. You used to be able to purchase orbs, which are used to power bombs, invisible cloak, shield, etc. from a vendor near the Bobo pit. Now she takes your money, but your orbs do not increased. I’ve restarted, uninstalled, and even tried a new game. No matter how many times you try, you are unable to increase your orb count. FIX this fast!!!