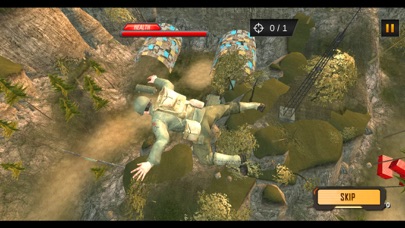 Military striking has began on the battleground with US Army Commando and the forces trying to battle it out on the remote island in the last hope of survival game in this third person shooters. This is an intense survival game with enemy attacks and shooting missions comprising of third person shooting. Begin the war army game shooting battle to rescue the war prisoners and win the battleground on this unknown island as the last commando. Land onto the island with your shooting gears and let’s step into the challenge of battleground shooting games.

Accompany US army squad on the battleground in the hope of survival as the last commando survival shooting missions of world war in this US army games. The parachute will help you land on the island in situation with no weapons or ammo. Collect the weapons and get ready to loot the treasure. The basic aim of the last commando is to get his hand on the treasure on the unknown island and acclaim to be the best player in this Last Commando Army Survival Battleground US army games.