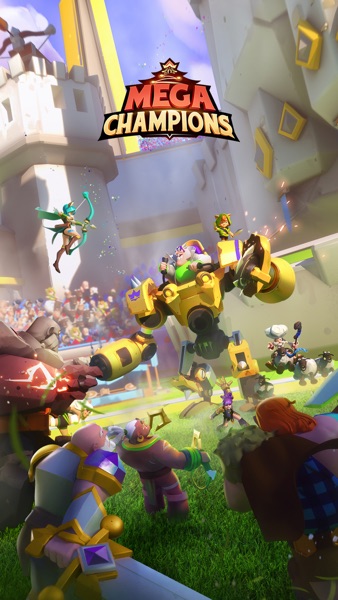 Embark into an epic world that demands strategy, tactics, but not your constant attention as your forces fight their way to victory even while you are idle! A war is raging on in the land of Yelsa. Wield your courage and build a team of heroes and restore order to the land!

— Game Features —
【Idle and Grow】
• Your mighty heroes will continue to battle monsters and collect loot while you are idle or away. Upgrade your heroes anytime with ease.

【Draw Epic Heroes】
• More than 60 legendary heroes from 6 different factions await you.
Each hero has their own unique talents and abilities. Train them to unlock their full potential or convert them into material that can be used to enhance your army. Build a dream team and smash all those in your path.

【Strategize and Dominate】
• Unique 10vs10 battle mode. Use your heroes wisely to overcome different foes. Capitalize on making the best lineup possible by combining characters of different classes and factions to your advantage. Be the tide that sweeps the battlefield!

【Countless Game modes】
• Embark on heroic quests, conquer the arena, challenge the Chrono Dungeon, or perhaps join a guild and embark on adventures in the Heroic Lore event with your friends! Overcome all challenges and defeat powerful bosses to prove your might!

【Meet Players from around the World】
• Hang out with players from all over the globe in Mega Champions. Forge alliances or clash with other players in a myriad of PVP modes!

【Win Mega Rewards】
• Every time you finish a quest or level up is another payday! Earn vast riches in diamonds and rewards for all your heroic deeds, and should you share the game with more players, you’ll even get some magnificent bonuses! What are you waiting for?

Free your hands and look away from the screen; Mega Champions offers a brand-new gaming experience that can be enjoyed even while you are away! Gather up your friends and join the fight!

Download the game and play now!
Compete and socialize with other players on: https://www.facebook.com/MegaChampionsGlobal

I loved this game at first because it was the first game I had seen like it. I quickly found out about AFK Arena which is exactly the same and this game copies completely but I didn’t care because my data and hours played were in this game. But when I logged in all of it was gone so I guess I’m switching to AFK Arena!!

They sold the game to another company. Once that happened it was down for over a month on both iOS and Android. Now that it’s back most people lost their account progress since they removed the ability to log in with your Apple ID. They don’t answer emails or care even if you spent money. Seriously just stay away.

Been playing 6+ months now, it has gone through a couple of rough patches but you can tell the developers are really trying to make it better. Plus no matter what changes are made some won’t like it. I think the rebalancing done a few weeks ago will be good in the long run. Really hope the developers keep up the hard work. My only complaint is that they have not added levels to the trials or the Chrono dungeon or main stages or guild trials. A lot of the older players have been stuck for quite a while. Also it make guild competitions impossible when most of your guild can’t compete. All that being said, still really love playing the game and can’t wait to see what’s next

I’ve never seen a mobile game do a patch so poorly in my life. We got an “overhaul” that was not asked for or needed. It stopped progress for everyone, nearly all guilds were inactive and the few big ones saw everyone pretty much stop playing. It seems they’ve attempted to add depth, but in doing it I can no longer progress. They made it so you level 5 characters and the rest could be leveled through a building according to their levels. Now it’s 10, so now I’m half gimped even with their “we’re sorry” compensation. Honestly I stick around hoping it’s fixed but I’m not holding my breath.

If you like that game, but don’t like the graphics...this one is for you. The same type of game, really. But, the graphics are more cartoon-ish. If that’s your thing...then this is your thing. All told a very good leveling system and they do keep things interesting.

Loved this game for a bit now but it’s so bugged out I can’t even open it, it just freezes on the loading screen main menu no matter how many times I close out and reload it. Rip

Soo the game said can’t connect even thou my wifi was on , I closed the app an it made me start a new account lost all my progression and the 30$ I spent

Like everything about this game except cannot play offline. Lots of fun. Fast. Easy. Looks great. If you like idle hero games this is a good one. Download recommended.

Trash game freezes as soon as 1st battle starts, what a waste of time

I really enjoy this idle game. There are still some bugs in the Crystal adventure and that does take a some time to play everyday but they seem to working to constantly improve the game. Update 8/13/2020: They made an awful update which made the upgrading of heroes more expensive without notice and people are thinking about quitting. So unless they make a change back I will need to lower my rating from 5 to 1 star.

Been playing a couple months now and it’s such a good game. Become my favorite idle game. Sure you can pay but would not say it’s pay to win and get diamonds pretty easily just playing.

Decided to give this game a try because it looked like a carbon copy of AFK Arena. But, acquiring resources in this game is extremely difficult. Idling for hours would probably raise your heroes level by 1-4 levels. Also, acquiring gems drastically slows down after a few days. Lastly, it’s impossible to complete the 7day quest for new players because obtaining resources is too slow. The stage levels power creep quickly, while you’re still stuck because once again, not enough resources to level your heroes and two not enough gems to consistently summon to evolve heroes. The game had potential but after a few days I have decided to uninstall.

Very fun and enjoyable game very minor bugs but they’re easy to get by. Also, this games underrated!!!

This game is almost like AFK arena but I see this game going places. Just need for content. Player ID: Curtky