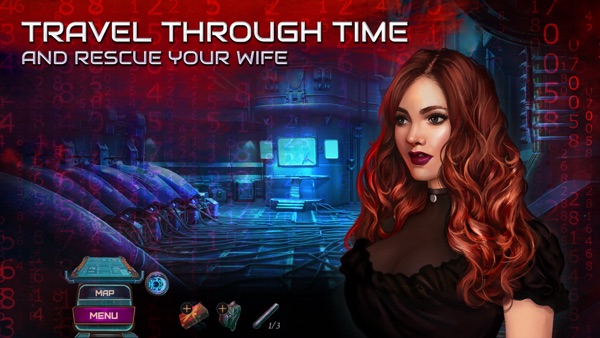 Framed scientist travels through time to save his beloved wife and reveal kidnapper’s identity. Find hidden objects in the post-apocalyptic world, solve cyberpunk puzzles and embrace the future full of adventures!

Get ready for thrilling sci-fi adventure in the big city, which offers riveting and refreshing approach to the hidden object puzzle adventure genre. “Family Mysteries 2: Echoes of the Tomorrow” is an emotional cyberpunkish ride with a hint of romance that takes you straight into not-too-distant future.

When the cybernetically-enhanced time traveler kidnaps your wife, and someone tries to frame you for the crime you didn’t commit, the world suddenly turns upside down. It’s time to take things into your own hands and prove your mettle. As a resourceful scientist you still have a few aces up your sleeve!

Second part of the Family Mysteries series introduces a post-apocalyptic vision of dystopian future where human race is at the brink of extinction. You’ll be dealing with high-tech, mutinous software as well as bunch of challenging riddles and – as usual – exigent hidden object scenes.

Exonerate yourself, discover the secret of the mysterious fugitive from the future, and save your marriage.

The future and the past are in your hands!

Fun storyline great graphics, nice variety of puzzles and games. The game allows me to play my own music. That’s important!

I’m not happy with limit this. Stop it money more pay off rip

Of all the developers of games in this genre I can download your apps but can’t play them on my iPad. My iPad is up to date and I used to be able to play your games... and with BF out if the picture you think you’d swoop in and grab us players right up... Alas I keep downloading your apps and they open for a fraction of a second and nothing 😩😭😫

This game is not very clear on what to go or where to go. For instance, after I completed the scene I couldn’t figure out what I was supposed to do next and I really had to use a hint to figure out that I was supposed to press the corner of the screen to leave the scene. How about I supposed to know to do that? There should be some indication that I need to press the corner of the screen to get to the living room but there was nothing. I also had to press on things multiple times for it to register which is really annoying.

This is a game not to be missed. It has a wonderful variety of innovative HOGs and an interesting storyline although the ending was rather predictable. No technical glitches and fun all the way through.

Note to awesomeperson: thank you for acknowledging my birthday! You should enjoy this game. It’s incredible! Considering that I had to deal with both rodents AND technology, I was amazed to discover that this gem by Brave Giant was one of the best games I’ve played in a while. So many games nowadays have the identical storyline: evil being stealing souls in exchange for immortality. Not this one. The storyline dealt with artificial intelligence, intertwined with romance, crime and science fiction. We were further intrigued by some extremely innovative HO scenes and mini-games as well. I’m a Luddite (look it up) so dealing with so many high-tech gadgets actually stimulated my brain. It was wonderful to play a game where logic and reasoning had to be used to progress through to solve the mystery. I felt challenged, for a change. This wonderful adventure was lengthy and had many interesting tasks to accomplish. The plot had several interesting twists and turns. The quality assurance was excellent. I would recommend this game to any player who loves this genre. I rarely rate a game at 5 stars, but all I can say is, “Well done, Brave Giant! Now give us another one that’s just as fabulous!” UPDATE: We have gotten very few games as of late. We should hopefully have a new Domini release within the week, and by the end of the month, be on the lookout for a new Edge of Reality from Friendly Fox. I already know the theme but I’m going to keep that MY secret. You’ll enjoy it, and they are working on another Bridge to Another World, but that’s not ready for release. Hopefully we will see something soon from Elephant as well. Today is my birthday, spent in quarantine! I’m looking at the glass as half full. We are starting to battle back, and we shall prevail! Happy gaming to all!

It’s just ok. Nothing thrilling and no bonus game. I. Felt it was a wast of my monthly credit.

Very confusing. Not able to put together!?.??

I’m a little disappointed that there are so few sci-fi themed find object games. Most are either fantasy, crime, or supernatural. I get it that developers are just trying to fit the market, but I feel like people would play them. That said, this game is pretty good. While the final reveal was a little obvious, it’s still an interesting concept. Yes, the plot is a little similar to Terminator, but it’s done pretty well. The puzzles are interesting and tricky. P.S. I’m pretty sure this has nothing to do with the first Family Mysteries game, so it’s probably an anthology series.

I'm so happy that my favorite developer under this publisher has finally concocted an electrifying, elaborate masterpiece, showcasing one of my favorite genres: advanced science, with a focus on time-travel and technology. Almost every aspect about this game is mesmerizing, including the thought-provoking and dramatic science-fiction storyline, which is presented in a novel fashion, finally breaking away from the tedium of the clichéd plots plaguing most HOAs. You play a scientific inventor, and it appears your wife has been kidnapped by a stranger who manifests as a three-dimensional hologram. Fast forward through a few twists in the storyline, and you time-travel to the not-so-distant future to save the human race from a Dystopian society controlled by a ruthless Artificial Intelligence. The characters elevate the storyline by exhibiting inner depth, so as I was able to establish an emotional connection to them. The overall artistic design of the game is outstanding, as the settings are accentuated by highly detailed illustrations that evince a compelling sci-fi ambiance. Gameplay is cleverly integrated into the scientifically oriented storyline, presenting refreshing ideas and intelligent manipulations all the way to the end. Inventory usage defies predictability by giving way to captivating surprises. The adventure portion of gameplay presents exciting challenges while incorporating scientific interactions to maintain its sci-fi edge. The varied and sometimes challenging HOSs exhibit a high level of creativity, including pioneering twists and puzzle-like actions that never become stale; they depict imaginative, futuristic concepts using items relative to the storyline. I like the one in which you assemble the paratrooper's vest while on the helicopter. The thematic, action-driven puzzles and storyline are smartly tied together to induce your critical-thinking as you progress. You will be persuaded to stretch your mind in solving stimulating puzzles of various complexities related to scientific technology, such as programming software, fixing computers and other equipment, etc. One standout is the intricacy of constructing the Motherboard in the Constructor Room. The Intruder Room game was a highlight: finding coordinates on the map in accordance with symbolic and textual clues to locate the Mainframe. The only glitches I encountered were touch sensitivity issues that materialized during inventory usage; however, it did not impede my progression. In summation, this is how a good sci-fi adventure should be: action-packed adventure, absorbing storyline, and fascinating gameplay. If I can gripe about one thing, it would be that the bonus chapter is too short. Other than that, this game is first-rate!

I loved the change of pace and the complexity of puzzles. I play a lot of these puzzle HOP games and I really enjoyed this one. Some difficult HOPs too.

Pretty good game if it had a bonus chapter. It’s super easy it should have been one of there free games it’s not worth 6.99

The first part was fantastic but bonus chapter was a waste of time, way to short. I am not a sci-fi girl but this was very good.I hope there is a part 3.

I would love to give you my money to unlock the full game but yet again your links don’t work. This happened with the last game. Please fix. This is frustrating