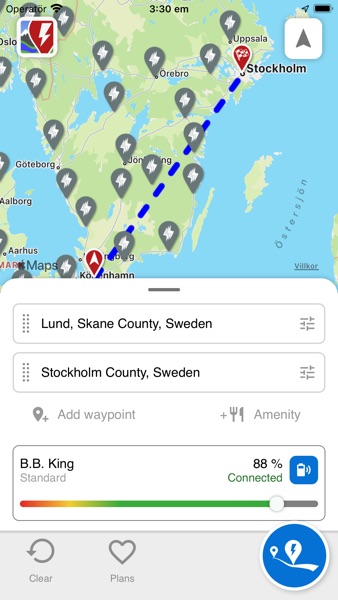 CarPlay goodies with lots of new settings and next stop info window!

A Better Routeplanner (ABRP) is the world’s most respected service to plan, learn and dream about Electric Vehicles – EVs. Simply select your vehicle model, enter your destination and hit plan to get a full trip plan including charge stops and trip duration.
When you are ready to drive it, just go to driving mode and use ABRP as a real-time plan follow-up tool and even navigator, replan as necessary and get continuously updated information about your trip.
We support every major EV in the market. Which suits your needs best?

The app itself works well enough but the whole interface needs overhauled. It’s terrible and the Apple CarPlay interface needs a lot of work as well. I should be able to make the map smaller while using Apple CarPlay like you can with Google and Apple Maps so I can still interact with my music. Please overhaul the App and Apple CarPlay to make it a more user friendly experience. Great idea but terrible execution.

Most of the functionality broke with a recent update. Glitches everywhere. Yikes. I used to pay for premium, but no way with this experience.

The app is simply broken. You can’t select a vehicle. It just won’t work. I could set my location and a destination, but the button for selecting a vehicle simply doesn’t work.

Something broke in the last update. Lost my Tesla. Wont let me add a vehicle because the add vehicle button does nothing. Cannot figure out how to relink my Tesla account. Tells me my charger settings will give me chargers unsupported by my vehicle but will not let me set the charger or the vehicle.

This app has so much promise, but in my first attempt to actually use it to navigate via CarPlay on a recent trip, it froze so often that it was unusable and I had to revert to Google Maps and manually figuring out where I would need to charge. So disappointed, especially since I paid for a whole year! I hope the developers can make this thing work. 12/15/22 still freezing on CarPlay so although the developer seems to be saying it’s fixed, it is not.

I’ve been playing with ABRP for local driving for weeks; it was stable, intuitive, amazing results! Now, taking a 600 mile road trip and the app is unusable! Completely unresponsive both in the app and online (browser). What happened?

For some reason, whenever I switch from my EV to a rental one, it default to avoiding highways, tolls, ferries and international borders. Not helpful planning a trip from SoCal to Valle de Guadalupe. It didn’t use to do this

This app is such a mess. User interface and user experience need to be reworked, ask help from professional or just K.I.S.S.

it routes like its on drugs. it will drive you past a charger then take you back to it for a charge then go back to the original destination. it will tell you no chargers are available but there are lots along the path. pretty much ready to delete. its such a time waster its better to just get google maps and do it manually yourself

Because the app syncs so frequently Ford will lock your account. A random error pops up without warning and you have to call and receive a callback from a technician to unlock. Pain! Wish ABRP had warned me.

What I find interesting about this app is when I didn’t purchase the premium subscription, it worked better. After I paid 49.99/yr for whatever the reason the app keeps crashing and freezing when I try to plan my routes. I’m using an iPhone 13 Pro and I’d expect better results. There’s no way I can justify keeping this subscription for something that crashes this often. Granted, the desktop/direct website works well, but isn’t of any help if you don’t have a Wifi hotspot/or enough hotspot data on your iPhone.

This app is great for what it does, but it is still a buggy mess. The UI constantly locks up and needs a force close. I’ve been using this app for over a year and it seems to be worse now than ever. This is on an iPhone 11 on iOS 16 so it’s not like I’m using old stuff here.

I have a 22 VW ID4, the screen while driving is always offset to the left. My car direction is shown on the left 1/3 of the screen, and the speed limit sign is half off screen.

The functionality is amazing, and the routes are well done, but the UI is absolutely terrible. Its a confused mess of settings and options, hidden buttons, and meaningless options. The entire experience is frustrating to the point where you just want to throw the aop away. Right now the app tells me it has live data but the data is wrong, while the web app tells me it DOESNT have live data but the data it has is correct. Good UI takes complex information and makes it simple to understand and work with. This app does the exact opposite. Very sad. UPDATE the latest version now hangs every time it computes a route on my iPhone. Downgraded to one star.

I guess it just uses a data collection system to suggest routes and charges. The problem is that chargers are constantly up and down. Meaning it needs to CHECK if the charger is actually working. Day one it sent us to a charger that was being upgraded (for the last month). Then sent me to a charger that was on a turnpike (which took 22 miles to turn around. Will be deleting this app today. Total fail. Better? No not even close.

I almost never write reviews on iOS apps, but I’m making an exception here because this app is that much of a mess. The route planning isn’t even working. If you enter a destination, it basically draws a straight dotted line between the starting point and destination, and that’s it. It’s like it doesn’t even try to route your trip, let alone factor in EV charging like it’s supposed to. There’s what appears to be a button in the bottom right corner, but it does nothing. Maybe it’s just a logo? I thought maybe something was up with my account (or maybe it requires a pro subscription?) and/or something going on with the app specifically. So I tried logging into their website to try there and rule it out. However, their website isn’t accepting my login (even though I use 1Password, and see that I’m logged into the app with the same email). I tried resetting my password, and never get an email, as if I’m not registered with that email (even though it shows in the app as being logged in). The UX, when it does work, is also a hot mess. I could list all the problems I’ve had with it when it did work, but that’s been too long ago, I can’t remember them. I downloaded this after hearing recommendations from the EV community, but I’ll stick to just looking up chargers on other apps, like PlugShare, ChargePoint and Electrify America, and will be telling others to avoid this app.

This is the best app for EV route planning. Currently is having issues with crashing and freezing on iOS 16 though.

I really want to like this app. The route planning flexibility it offers is second-to-none. Unfortunately, it all falls apart when you’re actually out on the road navigating the planned route. Frustrating glitches make the entire experience untrustworthy, especially when using CarPlay with live SOC data. It will often report weird SOC values, pop up alerts for faster routes that don’t exist, get confused on when you’re charging, and on and on. If you are patient, you can make it work, but it’s just frustrating trying to figure out what’s going on while you’re on the road. I think the developers really need to focus on getting the CarPlay and live SOC experience to a more reliable state. Also, it desperately needs support for CarPlay Dashboard.