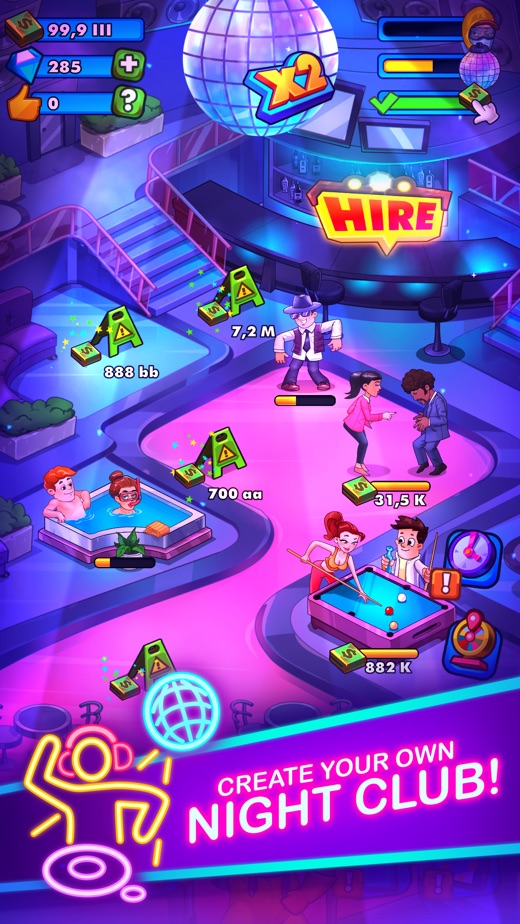 Ready to open new unrivaled nightclub? You will manage it and make money just by dancing with your guests!
Invite the real celebrity and other famous guests to the MEGA party!!

Office work is so boring, build an entertainment business of your dreams!
Try to turn a small nightclub into a large party space where people will hang out.

You don’t have to build complex strategies for business development. Actually, a little bit… Anyway this game is sheer fun!!

① TAP on visitors to earn money. Leave them to themselves and get idle profit!
② DEVELOP your nightclub, then you can invite more guests to totally burn the dance floor.
③ Then UPGRADE dance slots to earn mooore money.
④ HIRE cool DJ and and make sure the bar works — the dancers won’t get bored. Thus you’ll make more money!

Your goal as nightclub owner will be to expand your party business and develop all floors. Let’s have a rooftop party!! Accept the challenge and become a rich billionaire!

Be idle party simulator!! Be glorious! Be rich!
So, what time is it? It’s PARTY TIME!!!

I played this game 1 year ago. It was the best until now. A ad came for no reason and when I was done watching it, the music stopped. I started the app again and it’s still blocked. I reset my iPad and it still does not work. Fix the freaking ads man. THE FREAKING ADS!!!

Love a game where all you do is click around your screen. Definitely makes the game boring and repetitive with no story or reason to play it.

I can’t even play because when I open the app it shows a black screen and closes out.

So I have a question at what point does this game get past the basement I don’t seem to understand what I’m doing wrong in this game I have been playing it for several months and it seems the only thing I get to do is allow the characters to collect money and I am done just listening to music. The game just seems a little strange that my points are points that I collected or money has been as much as $386.688 aa. Plus the game doesn’t seem to be going anywhere I collect the money I spent the time in the game goes nowhere maybe before I delete the game you might respond and give me an explanation as to what supposed to happen next because I have use that money to make the little slide bar go faster but that’s all I get to do with the game is sit there and watch people collect money there’s no adventure drama or even any real fun in the game so I just don’t understand it. Sincerely an old-time gamer. PS I’m only giving it one star at this time because it won’t allow me to send it unless I give it a rating of a star but at this point the game is not even worth the star I gave it.

I love the art and the animations!! Like a real clicker, is very addictive

Too bad I cannot hear anything and I live the game.. hope you fix this soon

Every time I try to play it crashes me

Have no idea. Will not load!

To much Ad request in this game

I paid for the no ads and I still have to watch an AD for EVERYTHING!! Not happy!

Many more ad requests than similar titles I’ve played. The cta animations cannot be dismissed, and are always flashing for attention. Became an ADHD trigger for me. The total impressions I get is that it doesn’t respect my time.

The game won’t even open.

It won’t load so I can play