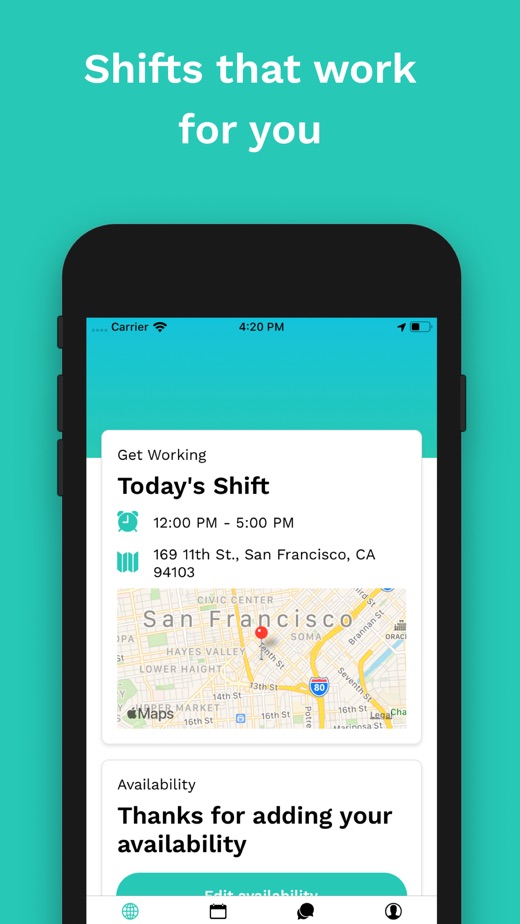 WorkWhile matches you to jobs that fit your skills, schedule, and location. You’ll get access to full-time and on-demand jobs. Get paid the next day after every shift you work.

Join our workforce, choose the work that fits into your life, and earn more today!

How it works:
– Use our app to sign up for a WorkWhile account
– Complete our short virtual Orientation
– Choose from a wide variety of jobs: Warehouse associate, Delivery driver, General labor, and more
– Get paid the next day
– Get support when you need it – from a real person on our team

They won’t pay refferal fees. Need better system to keep up with. Horrible support. They don’t care for workers just another platform stealing from hardworking people

False advertising I did a referral and only got 50$ when it clearly says 100$. I talked to customer service and they are acting like they can’t do nothing. Also after one shift that you miss your whole account gets blocked which I think is very dumb

There management is horrible, zero training. I was blocked because I was went to the warehouse and there staff wasn’t there. So I denied the shift. They blocked me with a no show. It was my second day.. anyhow, stay away. They put frozen boxes of organic food out in the hot sun on the ground for days and then deliver that product to the customer. Lawsuit waiting to happen.

This is a good concept but at amusement park you should have 10 minute breaks with ice water every hour.

I was having trouble with the app clocking me in. I read that if I was unable to clockin to notify the supervisor immediately! I did! Arrived 20 mins early and at 15:01 when I realize that clocking in through the app was not going to succeed, I notified the supervisor. He reassured me several times things would be fixed. They were not. I was worked 2 days and then banned from the app. THERE IS NO SUPPORT TO CONTACT. Work while does not even have a help desk email that you can send your question into? Do not work this app you will be FREE LABOR!!!!

A lot of the jobs offered through this app are not really worth your time. Delivery jobs often require a ridiculous amounts of driving. The wear and tear to your vehicle isn’t worth the pay you are receiving. Customer support is even worse. Responses to questions and concerns often take days even when you need a time sensitive response ie issue with job.

Great app overall. They canceled a job on me the day before I was supposed to show and I still got paid. It is a really good app for work!!!

They only have warehouse jobs that require hard labor and constant heavy lifting. So this is obviously something that is catered to men only. And every single job is full and on waitlist.

I worked a shift with this app for axel hire. First off they are keeping a lot of money on the back end. Flat rate of 73 bucks and other apps are paying 30 dollars a hour for the same exact gig. But I worked over 28 minutes. So it needed to be approved. I waited 3 days contacted them. They told me still waiting for approval. 2 weeks later now I never showed up and they won’t pay me. Gas is 5 dollars a gallon. They want you to travel up to 120 miles. And then they lie and take your work off their app and say you never showed up. I’ve work a couple of apps throw axel hire… I have never had this experience. I should of known not to do it by the price point but they company is a sham.

The Ollie’s positions aren’t the same as described. Either I wasn’t working in the correct area or the job isn’t anything that the app states. We do not use RF Scanners, we do not use electric pallet jacks and I didn’t pick anything!! If picking at this warehouse is everything that I just did than the title needs to be changed to “unloading”. In plus, I drove almost an hour to be surrounded by racists. One of the managers told her coworker to “watch out for me” while I was grabbing my jacket to go to the next slot that we were working at & I never felt so disappointed in my life… I tried to continue working after that but I started to realize that every time we were on our last stickers, they always had me specifically lifting all of the boxes by myself from each pallet. I didn’t have a problem with the boxes that were 5 pounds because that’s easy, but before I clocked out I was lifting about 50, 25 pound boxes by myself and my back is in a lot of pain. I was bent over for 20-30 minutes lifting those boxes by myself while they talked about flavors of their vape pens and one of them even had the audacity to smoke the pen while I was lifting those boxes… I’m going to attach a picture of a pallet that’s SIMILAR to the one that I was working with but overall I would not recommend these jobs. But I want to be compensated for the whole day since I wasn’t at fault, I just couldn’t take it anymore… I drove 1 hour and 40 minutes back and forth from this warehouse just to be pushed away from other people’s actions and that is not fair. I sent the statement above to their helpline and spoke to Collin in their chat and he ignored some of my statements and responded to certain parts of the message above. Collin obviously couldn’t help me so another representative named Alejandro “assisted” me and basically told me that since I left early it does not matter what happened at the warehouse, so basically I was supposed to struggle until the end of my shift… They say that they documented everything but that’s still not okay, and breaks a lot of rules period but of course since I was a temporary worker they didn’t care. I just don’t want this to happen to anyone else. In other states it may be more and better opportunities but sadly I live in Georgia and the Ollie’s positions were the only things available for me.

The app claims to be a workers app but it is really hard to get a response from customer service. I had issues with the app and one one responded for over 24 hours. App also needs more job options and it needs to stop allowing employers to block workers over silly stuff. Give employers a way to rate workers to get better instead of a block. I like that you can withdraw your funds next day.

I downloaded and did everything I could only to find out this app isn’t in Arizona.

I needed to make quick cash and this app was head ache free and simply just allowed me to find a shift and work it. Very helpful and look forward to seeing more jobs in area. Really want to see the app expand because I believe in the vision

What a joke. I just signed up for it and it won’t even let me enter my city to search for jobs. I swear if I get any spam emails from today onward, I’m directly blaming this pseudo job app and will be reporting it to BBB. Delete my information now.

Needs number you can call to sort out issues. I worked an entire gig and had to stay late to finish an order just to have them say I didn’t show up. I checked in on the app, the sign in sheet and every other mechanism and still this happens and it isn’t the first issue. One gig shorted me out of money and they openly said that they do that sometimes. To give employers that much control but no means to effectively clear up issues for the one employed to that job. I don’t even see the point of taking a photo if that isn’t even used as far as identifying who is who. I see all of these high ratings it boggles the mind because that hasn’t been my experience.

I clocked out of worked on my first shift and the company called I was working for asking to see if I can pick up another route I agreed to 28 dollars plus 15 dollar bonus I completed a second route from 4:15-8:45 and I have not gotten paid! I reached out and told them about my clocking in issue and it’s been over 22 hours haven’t heard anything back. About my payment for working more hours then I clocked in for.