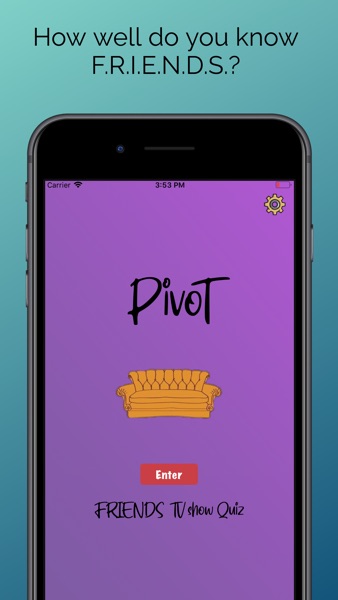 This app is made for fun, and to test your knowledge about Friends.

How good do you know Friends?
Are YOU the biggest fan among your FRIENDS?

You have 120sec to answer as many questions as you can! And there is only one true answer.

Test yourself for one of the greatest TV Show of all time and prove that you’re the biggest fan.

This is awesome practice for Trivia night! I do wish, however, I could see the right answers once I see the results!

Lots of cool facts, characters, and the game is fun!!

I love this app. It reminded me of some of those friends episodes I forgot. I love how the game is simple and not a lot of catches to it. I haven’t had any lag or add issues. I think some things are slightly misspelled but you still know what it’s talking about. I love that u can compare yourself to other players. Maybe the only thing is the question become predictable after awhile. Maybe also add more time bonuses. That would help make the game a little longer and more engaging when you get time bonuses.

I’m not complaining. It’s a pretty good app, and I’m sure any friends fan like myself would ADORE this app, but it needs more questions. That’s just my honest opinion. Thanks for listening.

Some of the answers are not accurate .. it says the answer is incorrect to the question about where the aroma room was .. the answer is in Phoebes dollhouse but it says it’s incorrect. Along with some other questions. So that is a little disappointing.

Just wanna say that the answer to the “where is the aroma room” is wrong. It’s in phoebes doll house not Monica’s and that’s how phoebes caught fire.

It’s a fun game but some of the answers aren’t right. I’ve seen ever friends episode at least 50 times each. I know this show forwards and backwards. While most are right some aren’t correct. Work on fixing those issues and I’ll definitely give it five stars.

Overall the app is okay if you love friends but some of the questions are wrong. The dollhouse with the aroma room was Phoebe’s not Monica’s, Monica was way to uptight for that. Chandler was not a stand up comedian he did data configuration for most the seasons. And Dutch is spelled wrong is one of the questions. But it’s okay.

Not sure how to correct an answer. Where did Rachel and Ross first kiss? In the coffee shop I answered that and it’s wrong. So I answered it again, in the apt and that was wrong and then another. Last one left is at a college party. I know Rachel and Chandler kissed at the party but don’t ever remember Ross and Rachel kissing. Am I wrong. Need a suggest on how to allow questions that are wrong to be corrected

Repeated questions and the answers are wrong. Whoever created the app has never seen the show...it’s not fun to play.

I like its trivia testing yourself on FRIENDS. I love this show so much. Watched it from when it first aired til its final show. There are a few questions that I’m pretty sure the answers are incorrect, ex. What is Chandler’s job/occupation? He was a Data processor but game only accepts “Stand up comedian” as the correct answer. Also the Aroma room was in Phoebe’s dollhouse, not in Monica’s. Anyways, bc of those few errors I only gave this game 3 stars. Its fun to just pass the time or a quick break. Could be made better though.

Not sure who wrote these questions, but Chandler’s job was not a stand up comedian and Heckles was their downstairs neighbor not upstairs. Questions are also repeated very frequently

One of your answers is incorrect. Monica’s second favorite game was Ms. Pac man. Her first favorite was the vending machine. The episode was on yesterday .

I love the show FRIENDS and this app is so fun. If I could add anything, I would add quiz categories such as, relationships, kids, Monica, Chandler, Ross, Joey, Rachel, and Phoebe. For the characters, do a category for each. You can also add a category for each season.

Is the only way to play the game is to start over each time? Questions are repetitive and no instructions on “how” to play the game. Are you just supposed to try and beat your last score? Seems boring if this is all there is to the game, and not much of a game!

I’ve done the quiz a few times and it ends with a score but I don’t understand what it’s based on. One time I got 19, then 21, then 20, then 19 again. So what do the points mean? How many points am I supposed to get? What’s the goal number? Also noticed several misspellings. For example Dutch was spelled Duth and there were a few others. I love answering questions about Friends but I’m also competitive like Monica so I want to WIN or feel like I’m close to winning. The only good thing about it was the questions were very challenging and fun.

This friends quiz app is a really fun, easy to play, and difficult in a good way all at the same time game that everyone can play. Although on the bad side there is a few kinks. Everything good has something wrong with it. It’s just how the world works. I have found that some of the questions are repeated over again in the same game. And the same ads pop up every time you press “restart”. That can kinda take a damper to a fun game. Just don’t have a ad after every game. It’s just annoying. But over all a GREAT GAME! enjoy playing for all my other friends fans! Just remember... Joey doesn’t share food!